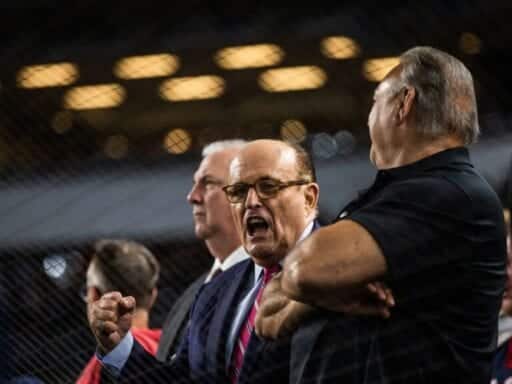 Share
Loading...
Rudy Giuliani during a May 2019 game between the Boston Red Sox and the New York Yankees. | Rob Tringali/SportsChrome/Getty Images

As Trump faces impeachment, Giuliani returns to television to expound upon the conspiracy theories that lead to the impeachment inquiry.

During a moment in which President Donald Trump appears to be days from being impeached, his personal lawyer is boldly promoting more of the sort of conspiracy theories around the Biden family and Ukraine that has led the president into impeachment proceedings in the first place.

Trump’s personal lawyer, Rudy Giuliani, gave an interview with the conservative One America News Network (OAN) that aired Saturday and Sunday, in which he pushed increasingly convoluted conspiracy theories about the Biden family and Ukraine.

And he brought along men he presented as witnesses able to verify his claims, including Andrii Derkach, a member of Ukraine’s parliament who is also a promoter of Biden-Ukraine conspiracy theories, and Yuri Lutsenko, a former prosecutor who has clashed with the US’s former ambassador to Ukraine, Marie Yovanovitch.

The interview and the commentary he provided in a series of tweets are just the latest in a long line of radical statements Giuliani has made, like his November statement to the New Yorker’s Adam Entous, admitting he worked to have Yovanovitch fired so he could pursue this conspiracy theory investigation.

“I believed that I needed Yovanovitch out of the way,” he told Entous. “She was going to make the investigations difficult for everybody.”

It was an oddly timed moment to say as much, given that Yovanovitch’s sudden recall is one of the many unusual decisions Democrats explored while building their impeachment case.

But it, and the OAN interview, are signs that rather than recede into the background and allow congressional Republicans to defend the president ahead of this week’s House impeachment vote, Giuliani is seizing the moment to highlight those actions and the conspiracy theories that motivated them.

Giuliani spent the OAN interview discussing the “evidence” he found in Ukraine to support what the interviewer Chanel Rion referred to as “so-called conspiracy theories.” And in large part, this evidence built on an already wild story, adding strange new twists like the death and resurrection of a disgraced Ukrainian prosecutor.

What Giuliani claims to have learned in Ukraine

As Vox’s Jane Coaston has explained, Giuliani and several of his associates have long maintained — without verified evidence, and despite federal assertions otherwise — that Ukraine meddled in the 2016 election on behalf of the Democrats. He also claims that former Vice President Joe Biden pushed for the firing of a Ukrainian prosecutor in order to protect his son, Hunter, (and Burisma, a Ukrainian energy company Hunter served on the board of) from investigation, and that former ambassador to Ukraine Marie Yovanovitch was anti-Trump.

Each of these theories has been debunked, but Giuliani raised them all on OAN, focusing heavily on the Bidens.

“We have found multiple crimes the Bidens have committed: extortion, bribery, and money laundering,” Giuliani said. He went on to present “evidence” he said supported this assertion, relying in part on a handwritten diagram titled “Bribery (Crime).”

The extortion and bribery accusations center on a video of Joe Biden bragging about his role in instituting anti-corruption reforms in Ukraine filmed at a session at the Council on Foreign Relations in 2018.

In it, Biden takes credit for an effort that involved the G7, the International Monetary Fund, the EU, and other international bodies to get Ukraine to remove then-prosecutor general Viktor Shokin, who was seen as blocking anti-corruption initiatives. Biden was directed to deliver a message to the Ukrainian government on behalf of these groups and the US government: that their loan guarantees would be cut off unless they removed Shokin.

You can question a witnesses credibility but you cannot question hard documentary evidence, which each firsthand witness part of this investigation provide. pic.twitter.com/FBTMpTySuQ

Referring to this statement, Giuliani said, “I don’t think I’d ever seen as concise, or as tight, or as clear a confession. But worse than that, I saw a confession with proof of guilty knowledge by leaving his son out.”

Evidence revealed that corruption in 2016 was so extensive it was POTUS’s DUTY to ask for US-Ukraine investigation.

Impeachment is part of Dem cover-up.

Of course, Biden’s statement wasn’t a confession, and unlike Trump’s asks of Ukraine, the former vice president’s request was sanctioned by the US government and the international community. And although Biden may not have mentioned his son, in pressing for Shokin to be replaced by a prosecutor more interested in anti-corruption work, he was placing his son and Burisma in more danger of being investigated, not less.

The witnesses and evidence Giuliani presented to support his case are equally nonsensical. For instance, OAN showed what it said was a document from Latvian prosecutors that casts Burisma as being involved in corruption.

The document was meant to show Hunter Biden was involved in money laundering; instead — if it is real — it merely confirms what was already known: a number of countries were concerned about Burisma and its business practices, and were frustrated Ukrainian prosecutors weren’t doing more to investigate it. Hunter Biden’s decision to join such a company doesn’t demonstrate good judgment (as he acknowledged in October), but the document is far from a smoking gun.

And Giuliani’s witnesses are not overly credible. He cites Shokin himself, one of the fountainheads of the Biden firing conspiracy theory, who was accused of lying on an application for a US visa by Yovanovitch’s sworn congressional testimony. Further adding to questions of the credibility of Shokin and his documents are Giuliani’s claim that “Shokin’s med records show he was poisoned, died twice, and was revived.”

He also relies on Shokin’s successor, Yuri Lutsenko, who was also almost involved in a business deal with Giuliani. In early 2019, the lawyer’s firm proposed that Lutsenko, who at that time was still prosecutor general, authorize a payment of $200,000 to help the Ukrainian government find embezzled money. Lutsenko has admitted to lying to a conservative journalist, giving him a false statement that cast Yovanovitch in a negative light.

Given the witnesses he brought forward and the quality of the evidence he presented, it isn’t clear that Giuliani discovered anything during his Ukraine trip that will lend any credence to his conspiracy theories. But less important than whether they are true, is whether the president is convinced by Giuliani’s findings and acts on them.

Giuliani’s interview comes at a time when the president hopes to justify his actions with Ukraine in the face of impeachment. Making public statements about the further pursuit of the conspiracy theories that helped launch impeachment does not seem like the sort of thing that would help with that justification, but fits with Giuliani’s actions in the impeachment process so far, which have been less than helpful to his boss.

He infamously read his texts off of an iPad on Fox News, further implicating the State Department in Trump’s attempts to pressure Ukraine into investigating the Bidens. And as Trump’s allies attempted to mount a defense of the president’s actions around the argument that there was “no quid pro quo,” Giuliani sent tweets that undercut that argument.

Similarly, Giuliani’s OAN interview adds credence to a Democratic argument for impeachment: that Trump must be removed because the Ukraine scandal definitively proved that the president is not above asking foreign powers to interfere in US elections for his benefit.

This tendency to give fuel to Trump’s critics has frustrated some current and former members of the Trump administration. During her congressional testimony, former National Security Council official Fiona Hill said former national security adviser John Bolton told her “Rudy Giuliani is a hand grenade that is going to blow everybody up.”

According to Politico, the US ambassador to the EU, Gordon Sondland, has told other State Department employees, “Every time Rudy gets involved he goes and fucks everything up.”

But Giuliani maintains the support of the president, who has stuck with him despite all criticism. Trump is his willing partner when it comes to the advancement of Ukraine-Biden conspiracy theories. Trump reportedly called his lawyer as soon as the man returned from Ukraine — while his plane was still taxiing — to hear what he’d learned on the trip and debriefed with him at the White House on Friday. And Monday, he retweeted clips from Giuliani’s OAN interview.

Isabel Wilkerson wants to change how we understand race in America
How a vaccine gets made, explained (to kids)
The case for a Native American secretary of the interior
Electric vehicles are going to render the fight over fuel economy standards moot
July 27: Trump asked Russia to find Hillary’s emails. They acted within hours.
Britney Spears wants her father to permanently step down as her conservator