As they make their final pitches to New Hampshire voters, Democrats amp up their attacks 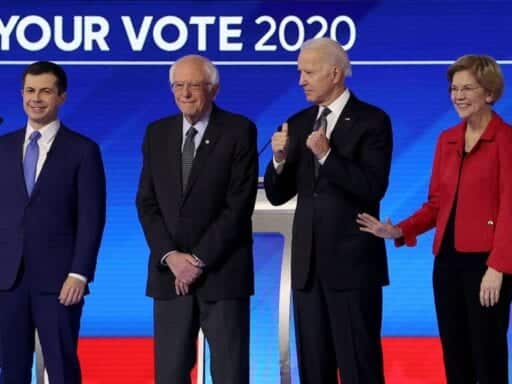 A tight race intensifies in the days ahead of the 2020 New Hampshire primary with attacks from the frontrunners.

Democratic presidential candidates are delivering their final pitches to voters in New Hampshire ahead of Tuesday’s primary, and those considered to be in the race’s top tier are making pointed attacks a key part of those last minute messages.

The candidates largely avoided personal attacks, but the strategy nevertheless is a marked turn in a primary race that has — not always successfully — attempted to remain civil, and a reminder that the race’s stakes are growing ever-higher as as state primaries unfold.

Sen. Bernie Sanders and former South Bend Mayor Pete Buttigieg — both of whom have declared themselves the winner of the Iowa caucuses — targeted each others’ fundraising strategies, with Sanders characterizing himself as a candidate powered by grassroots support and Buttigieg as someone who is accepting of everyone.

“One of the areas of contrast [with Buttigieg], to be honest with you, is at last count he has about 40 billionaires who are contributing to his campaign,” said Sanders on CBS’ Face the Nation.

“Bernie’s pretty rich, and I would happily accept a contribution from him,” Buttigieg said on CNN’s State of the Union. “This is about taking everybody into the fight … I’m not a fan of the current campaign finance system, but I’m also insistent that we’ve got to go into this with all of the support that we can get.”

Pete Buttigieg on Bernie Sanders fundraising attacks: “Bernie’s pretty rich, and I would happily accept a contribution from him… I’m not a fan of the current campaign finance system, but I’m also insistent that we’ve got to go into this with all the support we can get” #CNNSOTU pic.twitter.com/4DuWyh4DYd

Warren — who has made her rejection of corporate donations a key part of her campaign — took a more subtle dig at Buttigieg, while offering explicit criticism of former New York City Mayor Michael Bloomberg, saying on ABC’s This Week that “the coalition of billionaires is not exactly what’s going to carry us over the top.”

“Democrats and Republicans get that they’re getting the short end of the stick, and what’s the reason for that? It’s corruption,” she said. “It’s a bunch of billionaires that make big campaign contributions or reach in their own pockets like Michael Bloomberg does.”

Sen. Elizabeth Warren responds to Pete Buttigieg, who defended taking money from billionaires, saying you need to build the biggest coalition you can.

“The coalition of billionaires is not exactly what’s going to carry us over the top,” Warren says. https://t.co/nPQ57Pvs7t pic.twitter.com/vMxPj5k7C6

Buttigieg and former Vice President Joe Biden tousled over their track records in middle America and Washington in the wake of a cutting ad from the Biden campaign lampooning Buttigieg’s time as a small-city mayor and his lack of support among black voters.

“In order to win … you’re going to have to in a lot of places that in fact have very diverse populations,” Biden said on ABC’s This Week. “So the assertion that he’s ready across the board, I don’t see it.”

Biden also took aim at Sanders, saying “it’s going to be incredibly more difficult” for him to beat Trump as a Democratic socialist.

One of the criticisms of the 2016 Democratic primary was that it became too divisive; and that the Democratic Party did not unite once Hillary Clinton became the nominee. Clinton has made this critique herself often in recent weeks, like when she said on the podcast Your Primary Playlist, “All the way up until the end, a lot of people highly identified with [Sanders’s] campaign were urging people to vote third party, urging people not to vote … it had an impact.”

These attacks don’t by any means threaten to divide the party — and all the candidates have stressed they will unite behind whoever wins the nomination — but they are a potent reminder of just how close the race remains ahead of a state that often shapes the field ahead of Super Tuesday.

The New Hampshire primary, the first primary in the nation, often plays a crucial role in cutting down the field, and for that reason, is usually closely watched. As Vox’s Ella Nilsen has noted, winning New Hampshire also makes a give candidate more likely to become the nominee:

New Hampshire wields a substantial amount of political power; no major-party nominee in modern history has won without coming first or second in New Hampshire. Winning here, all else equal, increases a candidate’s expected share of the primary vote by 27 percentage points, political scientist William Mayer wrote in 2004.

And this year, the state’s already important role has been heightened by the chaos that unfolded last week during the Iowa caucuses. No official winner has been declared in that contest, in which both Sanders and Buttigieg have claimed to have come out on top. As long as voting does not run into any problems, New Hampshire, should provide Americans with their first clear picture of who voters — rather than polls — see as the frontrunner for the Democratic nomination.

Essentially, Nilsen notes, “a strong New Hampshire finish can breathe new life into the top three candidates’ campaigns. Those who finish lower will find the primary to be another nail in the coffin.”

Although primary voting is just over 24 hours away, there are still a number of undecided votes to be won — recent polls have found that as many as half of New Hampshire’s voters say they haven’t made up their minds, or could be swayed to realign their support.

Polling averages show Sanders as the New Hampshire primary’s clear frontrunner, but Buttigieg has been rising in the polls at a rapid clip, and the margin of error of most of those surveys — as well as the large number of undecided voters — means a come-from-behind victory by Warren, or even Biden, is not impossible.

It is with all of this at stake that the candidates sniped at one another this weekend. And whoever comes out on top will likely have a little more of that sought-after momentum going into the Nevada and South Carolina primaries later this month.

Mindfulness meditation in America has a capitalism problem
Immigration detention crisis: On social media, people ask #WhereAreTheGirls
A contested convention — and why it probably won’t happen — explained
How to write a great song, according to singer-songwriter Neko Case
Trump may still be infectious. He’s having events anyway.
The Democratic establishment is doing a really bad job of stopping Bernie Sanders