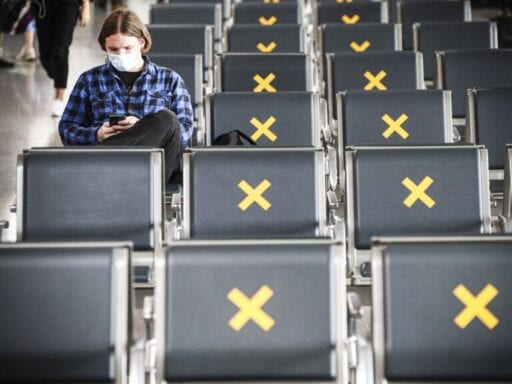 Share
Loading...
A passenger at a departure gate at Vnukovo International Airport in Moscow, Russia. | Sergei KarpukhinTASS via Getty Images

The confusing WHO remark and walk-back, explained.

For months now, it’s been widely accepted that many people infected with the novel coronavirus experience few if any symptoms but can still potentially spread the virus to others. Exactly how many of these people without symptoms are “silent spreaders” has been a mystery.

Despite the mystery, the public health message has been clear: We should behave as though we or anyone else could be a silent spreader. We should take precautions like wearing face masks, avoiding crowds, and maintaining physical distancing.

Yet that conventional wisdom seemed to be challenged this week when Maria Van Kerkhove, an infectious disease epidemiologist at Institut Pasteur’s Center for Global Health and a technical consultant for the World Health Organization (WHO), remarked at a Monday press conference that asymptomatic transmission of Covid-19 was “very rare.”

After a CNBC story on the remark went viral, some people began rejoicing that this was wonderful news, a reason not to worry so much. Some conservatives cited it is as evidence that public health measures need not be so stringent.

If this is true, it strikes me as remarkably good news. https://t.co/pJzupp3OaO

Good News! People who catch coronovirus but have no symptoms rarely spread the disease. Translation: sending kids back to school does not require millions of test kits.

Asymptomatic spread of coronavirus is ‘very rare,’ WHO says https://t.co/reIyrFb0Au

Many public health experts, meanwhile, were irritated, calling Van Kerkhove’s comment (and the CNBC story about it) a misleading piece of science communication.

A misleading @CNBC story about a rather unclear @WHO statement is making the rounds today.

It seems to suggest that people without symptoms don’t spread COVID19.

By Tuesday, Van Kerkhove was in front of the press again, walking back some of the comments and trying to explain what she meant. “I wasn’t stating a policy of WHO or anything like that,” she said. “We do know that some people who are asymptomatic, or some people who do not have symptoms, can transmit the virus on.”

Van Kerkhove said she’d been referencing a handful of preprints — studies that have not yet been peer-reviewed — and added, “I think that it’s a misunderstanding to state asymptomatic transmission globally is very rare.”

But some public health experts were nonetheless dissatisfied. Andy Slavitt, former acting administrator of the Centers for Medicare and Medicaid Services, tweeted, “This is such a mistake that I’m not sure how or if WHO pronouncements can be covered now.”

What Slavitt and others fear is that the WHO’s statements will further politicize the debate over the use of masks, putting more people at risk of infection. “It’s a very serious mistake to interpret this to mean that you don’t need masks in public,” says Eric Topol, a research methods expert and director of the Scripps Research Translational Institute.

In all the back and forth, here’s what you should know about the difference between asymptomatic and presymptomatic infection — and what that means for how to keep yourself safe.

What does asymptomatic mean and how is it different from presymptomatic?

We know more about presymptomatic patients, in part because they go on to get sick, so they are easier to identify. Covid-19 symptoms, on average, develop around five or six days after you are infected, although it can take up to 14 days. Some patients also only ever develop very mild symptoms.

Scientists are still just beginning to understand asymptomatic Covid-19 infections. Topol recently published a review of 16 different studies, and the results, published in Annals of Internal Medicine, found that a staggering 40-45 percent of all infections might be asymptomatic. Topol says to separate out presymptomatic from asymptomatic cases, they factored in estimates of the five studies that took multiple PCR tests over time.

There were two noteworthy conclusions, Topol explains: One was that you can be infected with, and even have a lung injury from, Covid-19 without knowing it. Two of the studies he reviewed, one in South Korea and one on the Diamond Princess cruise ship, looked at CT scans of lungs and found substantial abnormalities. “That tells you something is going on, even in people who aren’t aware of it,” he says. “It suggests the possibility that you may be asymptomatic and have lingering damage or injury on a chronic basis.” The other was that three separate studies showed the viral load of asymptomatic patients was very similar to those who developed symptoms.

Another study, led by Oyuka Byambasuren, a postdoctoral research fellow at the Institute for Evidence-Based Healthcare at Bond University, used a systematic review and meta-analysis, screening 998 primary studies and preprints to find nine studies from six countries that followed up after an initial positive test to identify who later went on to develop symptoms. Based on this data, Byambasuren estimated an average of 15 percent of Covid-19 cases were truly asymptomatic.

A third study, by Swiss researchers, also found in a systematic review an asymptomatic average of 15 percent, although they reviewed different primary studies than Byambasuren did. (Her team excluded small family clusters that the Swiss study included.) But, the Swiss authors wrote, from their data the proportion of “pre-symptomatic [patients] could not be summarised.”

According to the WHO’s recent update to its guidelines on masks, “the proportion of asymptomatic cases ranged from 6% to 41%, with a pooled estimate of 16 percent,” numbers Van Kerkhove supported in a press conference on June 9.

This data that was one reason the WHO finally decided to recommend that the general public wear fabric masks if they can’t maintain social distance or are in a higher risk category — because people who don’t currently have symptoms can spread the virus.

Several peer-reviewed studies have established that presymptomatic people often infect others before they feel sick — in fact, you may be most infectious before you have any idea that you have Covid-19.

Asymptomatic patients, since they don’t ever feel sick, can be identified only through PCR tests, which can determine viral load. But this kind of test can only tell if viral particles are present — it doesn’t necessarily mean these asymptomatic patients are infectious. “That’s the biggest unknown,” Topol says, although he notes that evidence supports the idea of asymptomatic spread, particularly the review of transmission on the USS Theodore Roosevelt.

A lot more research will be necessary to get to the bottom of it. But Ashish Jha, director of the Harvard Global Health Institute, says, “We know that people with no symptoms but who are infected with the virus can and do transmit it to others.” He points to several studies that suggest 40 percent to 60 percent of Covid-19 transmission is in people who don’t have symptoms, whether or not they go on to develop them later. “That’s what’s so unfortunate about the WHO’s statement yesterday.”

“The people running WHO are superb scientists, and I have no questions about their scientific credibility or expertise, but they need to communicate more effectively,” he says. “They’re doing a better job than our federal government, but that’s a low bar.”

Tara Smith, professor of epidemiology at Kent State University, explains, “This is why masks and distancing are still so important: Either group could potentially spread the virus to others while still feeling fine.” She adds, “Many asymptomatic individuals may never be identified because we still lack robust testing.” Jha says this is why not having an effective testing and tracing strategy to identify those spreading the virus without symptoms continues to be “a major Achilles heel of this pandemic.” And without widespread testing and contact tracing, it will be hard to know how many people are truly asymptomatic.

So, in many ways, this whole conversation is a distraction from the key actions we know we need to be taking now. Since you may already be sick but don’t know it yet, it’s important to avoid exposing others by social distancing, wearing masks, and washing your hands. If you may be sick and infecting others without ever knowing it, it’s equally important to take the same steps.

Smith recommends wearing masks any time you’re in close contact with others for an extended period of time, especially in indoor spaces. For example, all of the 140 clients who agreed to testing after being exposed by two hairstylists with Covid-19 in Missouri tested negative at the end of their incubation period. Both clients and hairstylists were wearing masks. But Smith adds, “Masks alone are limited protection — combine them also with maintaining physical distance as much as possible.”

Lois Parshley is a freelance investigative journalist and the 2019-2020 Snedden Chair of Journalism at the University of Alaska Fairbanks. Follow her Covid-19 reporting on Twitter @loisparshley.