At court deadline, more than half of separated migrant families have been reunited 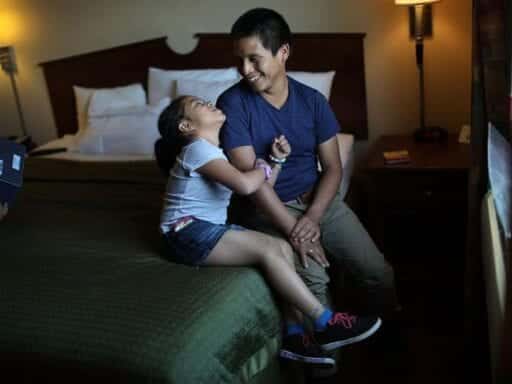 But hundreds of children are still in government custody without their parents.

As the court-ordered deadline passes for the government to reunite more than 2,000 families separated at the US-Mexico border, two things are clear: the majority of families have been reunited, but some remain separated.

And we don’t know what the timeline is for reunifying the remaining families — the majority of them separated because the parents have already been deported — and how many (if any) are likely to remain permanently separated.

As the deadline passed Thursday night, the Department of Justice and the American Civil Liberties Union (ACLU) filed a joint status report in the federal court case being heard by Judge Dana Sabraw, who set July 26 as the deadline for the government to reunite all families with children ages 5-17.

Here’s what we know:

No matter how many of the 378 children in the last category are with their parents, it is clear that a majority of separated families involved in this case have been reunited by the deadline. (The 1,442 reunited children account for about 56 percent of the total for children 5-17; additionally, 57 of the 102 children under 5 separated from parents were reunited by an earlier deadline, and more have probably been reunited since then.)

But it’s also clear that many separated families have not been reunited. Even though the federal government claims that all families that were “eligible or available” for reunification under the court’s deadline have been reunited, that’s because of how they define “eligible” and “available.”

The biggest outstanding question on reunifications is what happens to the children whose parents have already left the US. On Thursday’s call, DHS said that there were 431 such children, and that their parents had all been deported rather than accepting “voluntary” departure.

The ACLU, however, claimed in the court filing Thursday that there could be as many as 500. This number appears to have been based on a spreadsheet the government gave the ACLU on Wednesday, which might be less up-to-date than the stats the government is working with.

The federal government insists that these parents were asked whether or not they wanted their children deported with them, and that all of them chose to have their children stay in the US to fight their own cases. But the ACLU believes that hundreds of them were never even given the choice.

On Thursday, the federal government wouldn’t say what its plans were for locating and reunifying deported parents, because it’s still negotiating with the ACLU — and Sabraw — about that. The issue is likely to come up at the next hearing in the case on Friday.

The more urgent question on Friday, though, will be what happens after reunification for the parents (as many as 900 of them) who had been issued final orders of deportation before getting reunited with their children. These parents have already been presented with the choice between taking their children with them, and being deported alone — though the ACLU is deeply concerned that not all of them have really understood the choice being placed before them.

The ACLU is asking for Sabraw to freeze deportations of parents for seven days so that parents can be given a better opportunity to decide their families’ fates after they’ve gotten a chance to see their children again. The government believes they shouldn’t need more than 48 hours. If Sabraw doesn’t intercede on the ACLU’s behalf, family reunification could be followed very swiftly by family deportations and family re-separations.

11 memes that captured the decade
“The moral guardrails ... have dropped”: Why anti-Semitism persists
Animal Crossing is a virtual world where everything is beautiful and nothing hurts
The decade, in 6 minutes
Italy’s plan to drastically relax social distancing is a “calculated risk”
6 siblings of an Arizona congressman endorse his opponent in attack ads