AT&T is cutting jobs, but Trump is focused on its management of CNN instead 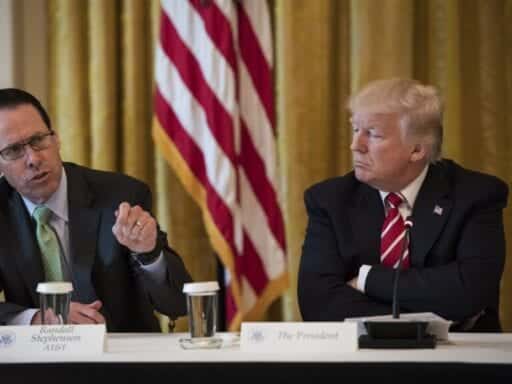 President Trump appears to be fine with AT&T slashing jobs.

President Donald Trump is very mad about AT&T over CNN. The thousands of jobs it’s cutting, not so much.

The telecommunications giant, which acquired CNN through its $85 billion merger with Time Warner in 2018, has generated scrutiny among the press, organizers, and activists over job cuts it has made over the past several months. Most recently, Axios reported that thousands of AT&T workers were about to lose their posts after training foreigners in line to replace them this year. Trump has positioned himself as a job creator and a crusader against outsourcing, but when it comes to AT&T, he’s not saying anything — well, at least not about jobs. His focus is on his ongoing annoyance with CNN.

On Wednesday, three days after the Axios report, Trump took to Twitter to take a swipe at CNN after a supposed “ratings dive” and suggested parent-company AT&T “should make changes.” It’s not clear what specific changes he would want.

Can’t believe @ATT keeps the management after yet another @CNN ratings dive. Nobody watching, NO CREDIBILITY! Maybe they should make changes at AT&T? https://t.co/jdCLuNWEEQ

This is hardly the first time Trump has called for AT&T to do something about CNN — which presumably translates to shifting to coverage that’s more favorable to him. He spoke out against the AT&T-Time Warner merger from the get-go, and while there were plenty of legitimate reasons to oppose the deal — it marked a significant amount of consolidation in the media industry, and multiple lawmakers raised red flags about it — Trump’s animus toward CNN was evidently in play. He has called on AT&T to fire CNN chief Jeff Zucker, and over the summer, the president pushed for people to stop “using or subscribing” to AT&T in order to force changes at the network.

I believe that if people stoped using or subscribing to @ATT, they would be forced to make big changes at @CNN, which is dying in the ratings anyway. It is so unfair with such bad, Fake News! Why wouldn’t they act. When the World watches @CNN, it gets a false picture of USA. Sad!

Just arrived in the United Kingdom. The only problem is that @CNN is the primary source of news available from the U.S. After watching it for a short while, I turned it off. All negative & so much Fake News, very bad for U.S. Big ratings drop. Why doesn’t owner @ATT do something?

Workers and organizers say thousands of jobs have been lost at the company, and more are about to go out the door. But it appears the main job Trump is worried about at AT&T is Zucker’s.

AT&T was a major beneficiary of the tax cut bill President Trump signed into law in December 2017. Before the legislation was even passed, the company said it would make investments that would translate to “7,000 good jobs for the middle class” if it was enacted, and soon after, it made a splashy announcement about worker bonuses. But while the bonuses happened, not so much happened with the thousands of new jobs — at least not for Americans.

According to the Communications Workers of America (CWA), which represents about 100,000 AT&T workers, CNN has eliminated more than 33,000 jobs since the Tax Cuts and Jobs Act, which saved it billions of dollars, was passed. And as Axios reported, the company has “expanded alliances” with major outsourcing companies that have allowed it to shift jobs abroad, and it is on track to do more of it in 2020.

“They seem to be recommitting and doubling down on the job cuts and the outsourcing,” Beth Allen, communications director at CWA, said in a phone interview. Allen said that call center and field technicians have been most affected by job cuts, while those in the wireless division have seen a lesser impact. And while the bonuses were nice, they were also a one-time benefit, not a long-term improvement.

“They’ve only continued to cut jobs, and that money [AT&T got from the tax cuts], they’ve been using it to buy back stock and do other things that benefit the shareholders and the executives in the company,” Allen said.

According to estimates from CBS MoneyWatch, thanks to the tax cuts AT&T could save $42 billion over the course of a decade.

AT&T has also been under pressure from activist investor Elliott Management to make changes at the company. In October, it reached an agreement with the firm to boost stock buybacks, add board members, and enhance “operational efficiency,” among other measures. (Oftentimes, “efficiency” translates to job cuts in corporate speak.)

When Elliott first announced its involvement with AT&T, Trump weighed in — but again, only on the CNN front. Months before, when 20,000 AT&T workers went on strike for four days over contract negotiations, Trump said nothing.

…But most importantly, @CNN is bad for the USA. Their International Division spews bad information & Fake News all over the globe. This is why foreign leaders are always asking me, “Why does the Media hate the U.S. sooo much?” It is a fraudulent shame, & all comes from the top!

And now, with more AT&T jobs apparently about to disappear, the president is ignoring the matter and instead just paying attention to CNN. Sara Blackwell, a Florida lawyer who represents US workers displaced by foreign workers and spoke with Axios about AT&T, said in an email to Vox that she reached out to the White House about the matter but “nothing was done.”

AT&T and the White House did not return requests for comment for this story. An AT&T spokesperson told Axios that the company is “continuously working to be more efficient” in its operations and was trying to help employees find other positions in the company when possible.

Trump can’t look beyond himself and his grievances with CNN

You would think thousands of workers losing their jobs would be a decent reason for Trump to ask AT&T to “do something,” but instead, he’s focused on CNN. In the battle over the CNN-Time Warner merger, his anger with the network often overshadowed his administration’s opposition to the deal. There were certainly legitimate reasons to question the merger, but because of Trump’s ongoing battle with the network, many questioned how much his personal vendetta was in play.

AT&T has responded to Trump’s CNN focus. It paid Essential Consultants LLC, a shell company set up by now-imprisoned former Trump lawyer Michael Cohen, for “insights” into the Trump administration after Trump was inaugurated. Documents obtained by the Washington Post confirmed that AT&T hoped Cohen would provide guidance on the Time Warner deal and steer it through regulatory scrutiny. AT&T confirmed the account, and CEO Randall Stephenson said the decision was a “big mistake.”

As Chris Welch wrote for The Verge in June, Stephenson has defended CNN since taking the network over:

When the White House temporarily revoked the press pass of reporter Jim Acosta, he publicly complained about it. “You didn’t like the line of questioning? Well, that kind of seems to be violative of our protections of freedom of the press,” he said back in November. A couple months earlier in September, Stephenson said, “we’ve seen no evidence that that’s the case,” when he was asked if Trump’s hatred of CNN would cause trouble for AT&T in other areas. “The contest is over and it seems that everybody is moving on.”

Allen said that during the worker strike over the summer, some AT&T employees tried to direct Trump’s attention to the matter over Twitter. Apparently, they failed.

As Puerto Rico prepares for the pandemic, residents fear the government hasn’t learned from Hurrican...
The radical possibilities of a box
House Republicans are ditching their plan to force Democrats to vote to abolish ICE
RBG, the 2020 election, and the rolling crisis of American democracy
This viral Angela Merkel clip explains the risks of loosening social distancing too fast
Trump administration releases new campus sexual assault rules in the midst of the pandemic