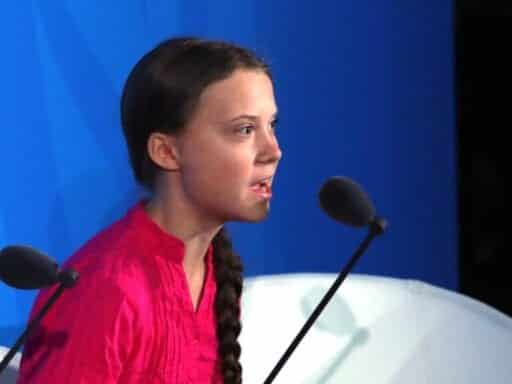 The climate activist is facing sexist and ableist criticism. She’s not alone.

Activist Greta Thunberg called world leaders to account on Monday with a blistering indictment of their failure to act on climate change.

The response of at least one world leader was to make fun of her.

President Trump tweeted sarcastically on Monday that Thunberg, who had just charged the audience at the United Nations Climate Summit with stealing “my dreams and my childhood with your empty words,” seemed like “a very happy young girl looking forward to a bright and wonderful future.” Others on the right also mocked and dismissed Thunberg, with conservative commentator Michael Knowles calling the 16-year-old activist a “mentally ill Swedish child” on Fox News.

Knowles appears to have been insulting Thunberg for having Asperger’s syndrome, an autism spectrum disorder. Autism isn’t a mental illness — it’s classified as a developmental disability. But advocates say that attacks like the ones Thunberg has faced are all too familiar for autistic people.

“The go-to way to dismiss what an autistic person is saying in our society is to point out that we are autistic,” Julia Bascom, executive director of the Autistic Self Advocacy Network, told Vox in an email.

Thunberg may be experiencing especially strong stigma from the right because she’s not just autistic, but also female. “Autistic girls tend to face a lot of pressure not just to act like non-autistic people, but also to live up to the same gendered expectations many girls face,” Bascom said — “we always have to be smiling and compliant.”

What Thunberg is facing is a reminder of the combined ableism and sexism many autistic girls and women face, Bascom says. But Thunberg, who has said her Asperger’s can be “a superpower,” appears undaunted by her critics. And her leadership on the climate crisis could help fight prejudice against autistic people as well.

Thunberg is facing stigma as an autistic girl

Thunberg, who is Swedish, went on a one-woman strike against climate change in August 2018, and gained greater worldwide fame earlier this year when she traveled by boat to New York City to attend the climate summit. In her speech before the summit on Monday, which quickly went viral, she delivered a message to the leaders of the world: “People are suffering. People are dying. Entire ecosystems are collapsing. We are in the beginning of a mass extinction. And all you can talk about is money and fairy tales of eternal economic growth. How dare you!”

Trump responded with sarcasm, tweeting, “She seems like a very happy young girl looking forward to a bright and wonderful future. So nice to see!”

Fox News host Laura Ingraham, meanwhile, juxtaposed Thunberg’s speech with a clip from the 1984 horror film Children of the Corn, joking, “I can’t wait for Stephen King’s sequel, Children of the Climate.”

And Knowles, a conservative podcaster, said in an appearance on Fox News Monday evening that if the movement for climate action “were about science it would be led by scientists rather than by politicians and a mentally ill Swedish child who is being exploited by her parents and by the international left.” When challenged, he doubled down, saying Thunberg has “many mental illnesses.”

Thunberg has been open about having Asperger’s syndrome, tweeting in August that “I have Asperger’s and that means I’m sometimes a bit different from the norm. And — given the right circumstances — being different is a superpower.”

When haters go after your looks and differences, it means they have nowhere left to go. And then you know you’re winning!
I have Aspergers and that means I’m sometimes a bit different from the norm. And – given the right circumstances- being different is a superpower.#aspiepower pic.twitter.com/A71qVBhWUU

Thunberg added that, “I’m not public about my diagnosis to ‘hide’ behind it, but because I know many ignorant people still see it as an ‘illness,’ or something negative.”

Overall, the kinds of attacks Thunberg is getting are “a routine experience for autistic activists, regardless of the issue we work on,” Bascom said. “It’s unfortunately still relatively common to treat autistic people like we aren’t credible witnesses to our own lives, or like we can’t have our own independent thoughts and beliefs — let alone an ability to act on them.”

That kind of thinking may be at work in claims by Knowles and others that Thunberg doesn’t know what she’s doing and is merely being “exploited” by the left or her parents.

Others, meanwhile, have used gendered language when talking about Thunberg. On Good Morning Britain this week, commentator Piers Morgan allowed that Thunberg was “articulate,” but said that, “she’s very young, and she seems very overemotional.”

In a column for the Daily Mail on Tuesday, he went further, calling her “a vulnerable young drama queen who should go back to school” (though he also agreed that Trump isn’t taking climate change seriously enough).

It’s hard to imagine Thunberg’s impassioned speech being read as “emotional” or “dramatic” if she were a man. Trump’s response, too, had gendered undertones — as Bascom noted, girls, whether autistic or not, face pressure to “be smiling and compliant,” and the idea that Thunberg should simply be “happy” rather than concerned about the future of the planet feels aligned with that pressure.

As many have pointed out, Thunberg may be receiving more media attention than indigenous climate activists like Artemisa Xakriabá, a 19-year-old who spoke at Friday’s climate strike in New York, because Thunberg is white. Meanwhile, autistic people of color can face barriers because of racism, including underdiagnosis and misdiagnosis.

Thunberg herself has always been clear that she doesn’t act alone — on Monday, she was one of 16 children from around the world who filed a legal complaint against five nations for violating their obligations under the Convention on the Rights of the Child.

She’s also turning some of her critics’ words around on them. On Tuesday, she changed her Twitter bio to read, “A very happy young girl looking forward to a bright and wonderful future,” in an apparent dig at Trump.

Greta claps back – subtly, of course – in her Twitter bio pic.twitter.com/VrR6kvvzeV

With her outspoken activism and her unwillingness to let mockery stop her, Thunberg isn’t just a leader in the climate movement (one, as she would likely note, of many). She’s also delivering an implicit rebuke to those who use her autism diagnosis or her gender to belittle her.

That’s been a welcome sight to many other autistic people, who have been sharing support with the hashtag #AutisticsForGreta.

“I think a lot of folks hope that, as a result of Greta’s advocacy, the world will start to think differently about autism,” Bascom said. “We need our existence as autistic people to be accepted, supported, and seen as normal. The more examples the world sees of openly autistic leaders, the more likely that is to happen.”