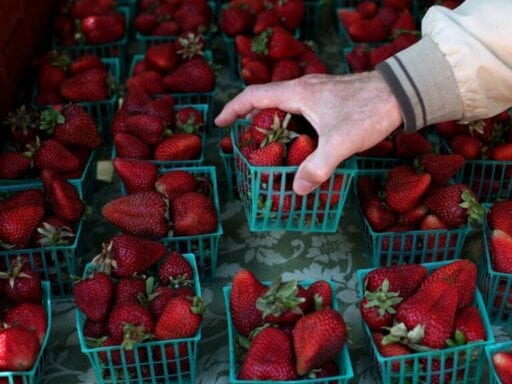 Consumers are finding needles in store-bought strawberries across the country.

What sounds like a bizarre urban legend has set off a federal investigation in Australia, where authorities are scrambling to figure out who’s sticking needles inside strawberries.

No, we’re not making this up.

According to the Australia Broadcasting Corporation, there have been nine confirmed cases of needles hidden in strawberries. The investigation has spread to six states in Australia.

The case of “commercial terrorism,” as a representative for the Queensland Strawberry Growers Association put it, has set off panic among fruit eaters and threatened the multimillion-dollar industry as supermarkets recall or discard their strawberry inventory over fears that people are going to find sewing needles inside.

(Vox reached out to Food Standards Australia and New Zealand, which is leading the investigation, but, likely given the time difference, have not heard back as of publication.)

Here’s what’s going on — as far as we can tell.

Reports have been trickling in of needle-filled strawberries across Australia

The reports began earlier this month in Queensland, which is a major producer in Australia’s commercial strawberry industry.

Most people weren’t injured by the needles, but a 21-year-old man from Queensland swallowed part of a needle after biting into a strawberry and reportedly had to be hospitalized because of abdominal pain, according to one Facebook post.

Just posting this as a warning to anyone that has bought strawberries (Berry Obsessions) from Woolworths recently….

A 7-year-old girl in South Australia also reportedly bit into a strawberry with a needle but was okay, and another man discovered a needle in a berry when he cut into it. Another man in Western Australia found a needle in the sink after he washed a bunch of store-bought strawberries.

Queensland authorities have put up a reward of 100,000 Australian dollars for information and are warning consumers to slice their strawberries before eating as a precaution, just in case any sharp objects are lurking inside.

Six strawberry brands have recalled their berries over the scare, and two New Zealand supermarkets are pulling Australian-grown strawberries from their shelves. Some growers are trying to take precautions by installing metal detectors and scanning strawberries before they’re shipped to supermarkets.

”As an industry we are sure that [the needles] are not coming from the farm,” Neil Handasyde, president of the Strawberry Growers Association of Western Australia, told ABC, “but we’re about trying to get confidence into consumers that when they buy a punnet of strawberries, that there isn’t going to be anything other than strawberries in there and they’re safe to eat.”

There was some initial speculation that reports of needle-filled strawberries might be some sort of hoax, and authorities haven’t totally ruled it out yet.

The Queensland Strawberry Growers Association suspects that a disgruntled employee might be behind the attack, sneaking the needles and pins into the strawberries. Police don’t know if it’s the work of one individual, or a group of individuals, but they believe others have followed suit with copycat attacks. (A 62-year-old woman in Queensland was discovered putting a needle in a banana.)

Queensland Police Commissioner Ian Stewart told the Guardian that it was difficult to find the needle culprit because of the multiple steps in the supply chain.

“There is a range of really complex scenarios which could play out here and we’re looking at all of them, and that’s what’s taking the time,” he told reporters Monday.

The bizarre incidents threaten to damage the strawberry industry in Australia

Officials are, of course, concerned about the safety of consumers, but the strawberry scare is threatening to damage the entire strawberry industry.

According to ABC, growers already had a glut of berries this season, and now that people are now terrified of biting into a needle-filled strawberry, prices have fallen dramatically and businesses have been forced to basically dump their crops.

Brenton Sherry, who runs the production business Kuitpo Strawberries in South Australia, told ABC that only “10 percent” of strawberry production will be sellable because of a loss of consumer confidence. That threatens the success of next year’s crop too, as producers won’t be able to break even this year.

Adrian Schultz, the vice president of the Queensland Strawberry Growers Association, told ABC that the effects were far-reaching: “I’m angry for all the associated people — it’s the farmers, the people who supply them, the packaging people, the truckies — with families to support, who suddenly lose their jobs.”

Agroterrorism is among the many fears of the modern age, and experts have called out vulnerabilities in food chains, including in the United States. But the fears typically center on natural foodborne pathogens, rather than cases involving a deliberate attempt to contaminate the food supply.

Grannies sticking needles in bananas and disgruntled employees hiding them in strawberries doesn’t seem to have been a scenario anyone was expecting.

A wave of evictions is coming. Democrats are proposing a lifeline.
Non-Americans have bet millions of dollars on the 2020 election
Protesters at the Nevada Democratic debate were immigrant rights activists
A Catholic cardinal has weathered sex abuse allegations for years. Now they’re finally public
US intelligence officials say Iran and Russia obtained voter registration information to interfere i...
If Republicans sour on Kavanaugh, here are 4 alternatives waiting in the wings