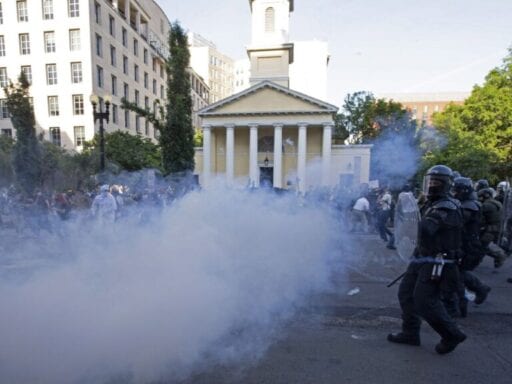 Videos show the on-air journalist and cameraman were attacked by a federal law enforcement officer outside the White House.

When federal law enforcement shot tear gas and rubber bullets at peaceful American protesters outside the White House on Monday, little did they know they’d start an international incident with one of the country’s closest allies.

Foreign reporters Amelia Brace and Tim Myers with Australia’s 7NEWS were in the crowd covering the demonstration live on air when officers suddenly began to violently disperse the protesters to make room for President Donald Trump’s photo op in front of a nearby church.

In the live video footage of the scene, Brace, standing off-camera, tells her anchors back home that she and her camera operator Tim Myers had just been shot at with rubber bullets while trying to flee from the approaching officers and that Myers had been hit. As she’s saying this, the crowd starts to run again: “Here we go, they’re moving through again!” she says, as officers in riot gear rush at the protesters.

As she’s describing the scene, an officer appears right in front of the camera, and seems to punch Myers, the camera operator, in the face with his fist as Brace shouts “Media!” The camera drops to the ground and goes black for a few seconds as the anchors back in Australia shout, “Whoa!”

“Amelia, can you hear us?” one of the anchors asks. “Are you okay? Or your cameraman?” Neither Brace nor Myers respond, but the camera resumes filming the scene. “It looks like a policeman just punched our cameraman,” an anchor says.

Brace then appears back on screen. “You heard us yelling that we were media, but they don’t care,” Brace tells the anchors. “They’re being indiscriminate at the moment. They chased us down that street.”

“You really saw the way they dealt with my cameraman Tim there — quite violent. They don’t really care who they’re targeting at the moment,” Brace continues.

Videos of the incident immediately circulated online. Brett McGurk, Trump’s former top anti-ISIS diplomat — tweeted it as well, commenting, “Here’s how this scene was viewed live in Australia. One of America’s closest and most dependable allies.”

Here’s how this scene was viewed live in Australia. One of America’s closest and most dependable allies. Rendered speechless. Just watch. pic.twitter.com/IjOzgs3WYo

Another video of the attack taken by another journalist at the scene, a reporter for the Guardian, clearly shows the officer rushing Myers and Brace, slamming a riot shield into Myers’s stomach before punching him in the face and grabbing his camera.

Several other officers run over, grab Myers, and shove him. Brace grabs his arm and the two flee. As they run toward the Guardian reporter, an officer chases them and appears to hit Brace in the arm with a truncheon. The two run offscreen as the Guardian reporter keeps filming the scene.

If they’re doing this to journalists while cameras are trained on them, what are they doing to black protesters when no one is looking? pic.twitter.com/ztLewLP8pA

On Tuesday morning, the Australian government called for a full investigation into the treatment of the two Australian reporters.

“We have asked the Australian embassy in Washington, DC to investigate this incident,” Foreign Minister Marise Payne said in a statement. “I want to get further advice on how we would go about registering Australia’s strong concerns with the responsible local authorities in Washington.”

Australia’s conservative Prime Minister Scott Morrison — who has been friendly to the Trump administration — told 7NEWS that the channel would have the government’s support should it want to file a formal complaint against the US government. He also called on the US Embassy in Australia to apologize for the violence — leading to a Twitter statement from Ambassador Arthur Culvahouse Jr. hours later.

“Freedom of the press is a right Australians and Americans hold dear,” Culvahouse wrote. “We remain steadfast in our commitment to protecting journalists and guaranteeing equal justice under law for all.”

It’s unlikely US-Australian relations will suffer immensely. Even the closest allies have spats like this one and get over it. After all, Australia is helping the administration confront China’s increased aggression and is one of America’s closest intelligence partners, so it’s to no one’s benefit to sever ties over the treatment of two journalists.

The bigger problem for the Trump administration, though, is that law enforcement’s direct targeting of reporters covering the nationwide protests will only hurt America’s image in the eyes of the world.

When even America’s friends get angry at a domestic situation, it’s a sign things aren’t going well at all.

China’s cases of Covid-19 are finally declining. A WHO expert explains why.
BTS’s new album is sublime comfort pop for the soul in lockdown
Why the US has failed in its coronavirus response, in one Trump interview
Winners and losers from the Big Tech antitrust hearing
Gas prices rise slightly after ransomware attack on oil pipeline
Measles cases have hit a record high in Europe. Blame austerity.