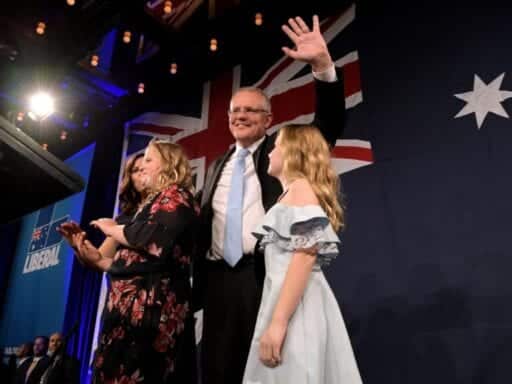 The Labor Party has lost the “unloseable” election.

The Australian federal election has delivered a shocking result, with the right-wing Liberal-National government expected to return to power for a third term despite polls and odds having strongly favored the opposition Labor Party.

Votes are still being counted; although no side has a majority, Prime Minister Scott Morrison’s Liberal-National coalition (also known simply as the Coalition) is projected to win enough seats in the House of Representatives to form either a majority or minority government. In the case of a minority government, the Coalition would hold fewer than the required 76 seats needed for majority rule, and would have to negotiate with independents for supply and confidence.

At the time of publishing, the ABC has called 77 seats for the Coalition, 66 for Labor, and 6 for independents.

Australia’s favorite election analyst Antony Green gave a tempered projection about the country’s political future as initial results came in, saying, “We can’t see an alternative to a Morrison government in the numbers we’re seeing at the moment.”

Hours after Green made those comments, Labor leader Bill Shorten conceded, telling supporters, “I know that you’re all hurting, and I am too,” after what has been described by the ABC as a “horror night” for Labor.

While the large seat losses predicted for the Coalition did not come to pass, one important symbolic change did occur: Divisive former prime minister Tony Abbott lost his once-safe Sydney seat of Warringah, which he’s held by a large margin since 1994, to independent candidate Zali Steggall, a lawyer and former Olympian who ran on the issue of climate change.

Labor has lost the “unloseable” election

The Labor Party was widely favored to win this election — so much so that popular gambling website Sportsbet opted to pay out to Labor-backers two days early, to the tune of $1.3 million (there was no such luck then or now for the man who placed a record-breaking $1 million bet on Labor on rival site Ladbrokes).

The Liberal-National coalition has trailed in the “two party-preferred” polls for years now, something that — along with the Coalition’s internal division over climate policy — has caused the group to change prime ministers twice in six years (Morrison has only been PM since last August).

The Coalition has grown (or appeared to have grown) increasingly unpopular over its inaction on climate change, an issue of great import to Australians, who now put climate change at the top of the list of threats to the national interest. While Labor’s climate policies are more in line with public opinion, its leader is not. Voters have consistently signaled they prefer whoever leads the Liberal Party to Labor’s unpopular leader Bill Shorten in the preferred prime minister polling, something Morrison tried to capitalize on by turning the parliamentary race into a presidential one.

And while polls had narrowed in recent weeks, Labor remained clearly in front, with some pundits now blaming the “shy Tory factor” (essentially people telling pollsters they plan to vote for more liberal candidates before actually voting for conservative candidates) for this surprise upset. On-air commenters in Australia are questioning whether they can ever really trust polling again, in scenes reminiscent of both the aftermath of the Brexit referendum and the 2016 US presidential election.

Pre-poll votes still need to be counted, and with Australians having cast a record number of early votes, these ballots could affect the results. Green says the early ballots won’t turn the results around, but they could determine whether the Liberal-National coalition wins the 76 seats required for a majority.

If the Coalition doesn’t manage to secure a majority, it will have to negotiate with the independents, who hold a growing influence over Australian politics.

Minority governments were once a rarity in Australian politics, but have become increasingly common in recent years, as voters have grown dissatisfied with the two major parties and the independent vote has risen. Seven key independent candidates released a joint statement earlier this month, declaring action on climate change a major condition for securing their support in the next parliament. It remains to be seen whether the Liberal-National Party will actually require the support of any of those climate-focused independents, or if they can rely on others to form a governing coalition.

A pre-election analysis by former Labor prime minister advisor Sean Kelly predicted that if Labor somehow lost this election, the party’s identity would be up for grabs, and “the idea that Australians have become permanently more progressive will die.”

Current Labor leader Bill Shorten has said he will not seek another term in his party’s top job. Many voters have long wished for one of the more popular leaders from the party’s left-wing, such as deputy leader Tanya Plibersek or infrastructure spokesman Anthony Albanese, to take over as Labor leader. While this could be the chance for more progressive members of the party to assert themselves, after the public’s repudiation of Labor, it remains to be seen whether that is a course of action Labor members have an appetite for.

On the Coalition side, Former Liberal prime minister advisor Niki Savva suggested that in the unlikely event Morrison prevailed, he would have unprecedented authority over the party, having single-handedly dragged the conservatives back from sure electoral defeat.

6.6 million jobless claims, new CDC guidelines: Thursday’s coronavirus news
We asked 8 Republican senators if they’ll investigate Trump for campaign finance violations
How In the Heights went from a student musical to one of the summer’s biggest movies
Listen: Billie Eilish’s big 2020 continues with James Bond theme “No Time to Die”
The government shutdown is hurting America’s diplomats — and diplomacy
Kurt Volker, impeachment witness requested by Republicans, debunks many of their arguments