Average body temperature appears to be dropping. Researchers aren’t sure why. 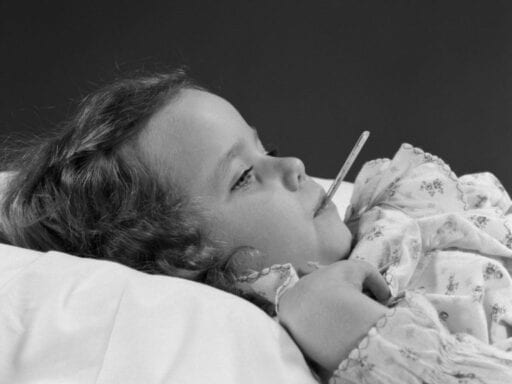 Share
Loading...
The average person’s body temperature has dropped since this picture was taken in the 1950s. | H. Armstrong Roberts/ClassicStock/Getty Images

Despite what you were likely told in elementary school, the average human body temperature is not 98.6 °F.

That commonly cited figure dates back to the 1850s, when a German doctor crunched that figure from data on 25,000 people in Leipzig. More recently, researchers found in a study of 35,000 British people that average body temperature is a bit lower, more like 97.88°F. That raised the question of whether average human body temperature might decreasing over time.

Now it turns out that may in fact be the case. In a new paper in the journal eLife, from a group of scientists at Stanford University, researchers analyzed three different databases of human body temperature readings: starting with a cohort of Civil War veterans, then to temperatures taken in the 1970s, and ending with data collected between 2007 and 2017.

Overall, the researchers find men born in the early 1800s had average body temperatures 1.06°F higher than men today. Women born in the 19th century were, on average, .57°F warmer than women today.

It’s not that thermometers are becoming more precise. Each individual dataset, when analyzed separately, also showed the pattern of declining temperatures over time. So the researchers could rule out measurement error as the reason.

The findings, when published, went viral. How can the average human body temperature be changing? It’s not that the human form is radically changing. If anything, it might be a sign that we’re collectively growing healthier.

But the larger truth is that there never has been one universal human body temperature. The fixation on 98.6°F has long obscured the fact there’s variability in what’s normal. And even in an “average” person, the temperature of the body is changing all the time.

Why is are average human body temperatures falling?

On average, the study found, human body temperature is decreasing .05°F per decade. You might wonder: Why?

The honest answer: “We don’t know,” says Catherine Ley, a Stanford researcher who co-authored the paper. “It’s just an observation,” she says, adding that their study was not set up to answer the bigger question. But they have a few hypotheses. Namely, “we think it’s a marker for the health of a population,” Ley says.

Humans, thankfully, have become healthier on average since the Civil War era, thanks to vaccinations, antibiotics, increased hygiene, and just about every other advancement in medicine.

Healthier bodies have less inflammation, which can lead to increased body temperatures. Plus, we’ve outright eliminated what used to be common diseases in the United States, and sources of fevers. “Getting rid of tuberculosis as a common infection in a population affects the overall population temperature,” Ley offers as an example. (Though the study did not directly compare average temperatures obtained in the US to areas where infections like tuberculosis is still common.)

But there could be other reasons why. Maybe it has to do with how we heat and cool our indoor spaces. In a well-heated home in the winter, the body may not have to work as hard to maintain a steady temperature, for instance. The proliferation of nonsteroidal anti-inflammatory drugs (like ibuprofen), which reduce inflammation and can reduce body temperature, could play a role.

Body temperature is variable. Even in one body.

How your body generates heat is fascinating. The warmth you radiate is the result of individual cells of your body breaking down the food we eat. You have these millions of heat generators all throughout your body, but the brain has ways to make sure they’re all working in order: It can increase or decrease blood circulation, cause you to sweat, or shiver.

As it stands, comparing an individual’s body temperature to a single number doesn’t make much sense.

“You can’t say there is a temperature you should be at, because it depends on who you are,” Ley says.

Women tend to run a little hotter than men, and their body temperature can fluctuate with the menstrual cycle. Age matters too. The older we get, generally, the colder we are.

A 2017 study in BMJ of 35,500 patients found that our average body temperatures declines around .03°F every decade (maybe due to the loss of fatty tissue under the skin). So it makes sense if grandpa complains about being cold over time. People with a higher body mass index tend to run hotter than thinner people (as people with a higher body mass are more insulated.) Overall, some people may run a half degree hotter or colder than “average” and that’s fine for them.

But then, a lot is still unknown. “Most variation in baseline temperatures remained unexplained by commonly measured health variables in both sexes,” the 2017 BMJ paper reports. “The same temperature that is normal for one person might be dangerously high for another.”

But not only that: Even in one person, body temperature fluctuates. There’s a circadian rhythm to it, and it even goes through seasonal changes.

Our bodies are at their coldest, overnight, as we sleep. They’re still warming up as we wake up. Our average body temperature might even fluctuate with the seasons. The 2017 BMJ found that body temperature was on average 0.14°F lower in July than February. In the summer, our bodies sweat more, working to stay cool. And in the winter, our bodies may try harder to hold onto heat, constricting the blood vessels to keep the core warmer.

Instead of a set number like 98.6, Ley says it would be better if there was a sliding temperature scale for individuals to figure out what’s normal for their demographic group.

“If I go into the doctor and I’m 30 years old, and I have a BMI of 20, and it’s 2 o’clock in the afternoon, there will be a normal for that series of characteristics,” she says. “It would be so nice if we could boil health down to simple rules, but biology is more complex.”

Ley says a big takeaway for her in this research was just realizing that while body temperature is a critical vital sign, there’s not a lot of great historical data on it. Body temperature datasets are potentially a huge source of information about population health, and “they have been, until now, rarely recorded,” she says.

She’s interested in following up with this work, and figuring out, exactly, what average body temperature can tell us about the health of large groups of people. “Normally, we look at life expectancy to determine if we have a healthier population,” she says. But “you have to wait a really long time to see a change in life expectancy.” It would be nice if we can learn a lot more about human health, and what works to improve it, just by taking temperatures.

Monday’s Iowa caucuses should be the last
The federal agency that’s supposed to protect workers is toothless on Covid-19
The Next Four Years: A Weeds series
Jimmy Fallon thinks Donald Trump has more important things to do than make fun of him on Twitter
It’s “white supremacy normalized”: A historian on why Stone Mountain should come down
Amazon’s looming challenge: Europe’s antitrust laws