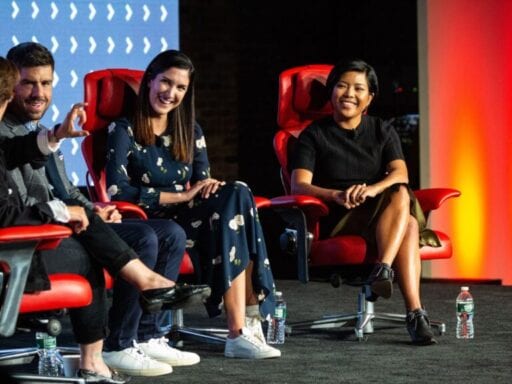 A behind-the-scenes look at how Lululemon’s Stuart Haselden replaced Away CEO Steph Korey earlier than planned.

Just four days after an investigation into a “toxic company culture” at the luggage startup Away went viral, the company announced that it had hired a top executive from Lululemon to replace its embattled co-founder Steph Korey as CEO.

The company told the Wall Street Journal that the CEO search had been in progress since the spring, insinuating that the fallout from the article, published by The Verge, did not play a role in Korey’s resignation.

But multiple sources tell Recode that while new CEO Stuart Haselden had indeed planned to join Away before The Verge piece was published, he was not meant to immediately helm the CEO role; instead, he would join the company as Away’s chief operating officer, or COO, reporting to Korey, and would later move into the top spot if all went according to plan.

Under that original plan, Haselden would eventually replace Korey as CEO — perhaps as early as mid-2020 — after he got to know the business better. It was also meant to allow Korey time to get comfortable with the transition, according to a person familiar with the plan. (Haselden was already COO of Lululemon, a public company worth $29 billion, and wouldn’t have taken the COO role at a much smaller company without the understanding that he would eventually hold the top spot.)

But after the workplace culture story erupted late last week, some of Away’s investors pushed to rip the band aid off and accelerate the CEO swap.

On Friday, the day after the article ran, Korey had posted an apology statement on Twitter that seemed to indicate she wasn’t going anywhere — “I know I have more work to do, and I will do better for the team.” But by Monday, she had agreed to a new plan to step aside for Haselden effectively almost immediately (he starts as CEO on January 13), giving up day-to-day control of the company while keeping a seat on the company’s board of directors with the title of executive chairman.

In a statement to Recode, the company said in part: “At the beginning of the year, our co-founders recognized the need to bring in additional leaders to help manage the company and accelerate growth. Steph Korey launched a search for an executive to become COO. During the course of that process, we met a fantastic candidate in Stuart Haselden. During our months of discussions with him, it became clear his experience and skills make him uniquely qualified to be our next CEO.”

The statement did not address the last minute change in plans prompted by The Verge article, and Away would not comment on it.

The original investigation from The Verge painted Korey as a micro-managing chief executive who blasted employees publicly on the workplace collaboration software Slack, and who hounded overworked junior employees in the company’s customer service division.

“I know this group is hungry for career development opportunities, and in an effort to support you in developing your skills, I am going to help you learn the career skill of accountability,” Korey wrote in one series of middle-of-the-night Slack messages to her customer service staff (emphasis hers). “To hold you accountable…no more [paid time off] or [work from home] requests will be considered from the 6 of you…I hope everyone in this group appreciates the thoughtfulness I’ve put into creating this career development opportunity and that you’re all excited to operate consistently with our core values.”

In her apology a day after the story ran, Korey said she was “appalled and embarrassed” by the exposed Slack messages published in the piece. She said had been working with an executive coach this year, and had built out an experienced leadership team around her and her co-founder Jen Rubio.

The story, and Korey’s subsequent resignation, touched off debates in the tech industry and beyond. Some wondered why an online luggage retailer seemed to espouse the kind of cutthroat company culture and demanding work-life imbalance that have historically been more common in Silicon Valley. Others questioned whether the outcome for Korey might have been different if she were a man and not a woman.

Investors in Away include venture capital firms like Global Founders Capital and Forerunner Ventures, as well as the mutual fund giant Wellington Management and the hedge fund Lone Pine Capital. The fact that some investors were keen to find a replacement for Korey — the founder-CEO of one of the hottest consumer startups around — even before The Verge article ran, indicates that some of Korey’s leadership flaws were evident to the board of directors previously.

But Away has still been able to raise more than $180 million in venture capital since its founding in 2015, and was valued at $1.4 billion in its most recent round of investor funding. The reason? Korey and Rubio, in a very short period of time, built a company that has sold hundreds of millions of dollars worth of hard-shell, carry-on suitcases popular with urban, millennial consumers. They’ve also been building a brand with ambitions to expand into other product categories such as apparel and consumer-packaged goods.

Along the way, the two founders have also sold tens of millions of dollars combined in company stock back to one of its investors, according to a source, relinquishing part of their stakes in the startup while limiting their financial downside in the event that the company didn’t continue to find success in the future. The company allowed dozens of Away employees to also participate in the stock sale, according to a separate source.

Now, it will be Haselden’s job to repair whatever fractures remain in Away’s company culture, while keeping it on the path toward a future outcome that many around the company still view as a realistic outcome: an IPO.

The GM strike has officially ended. Here’s what workers won and lost.
The RealReal isn’t buying a department store anytime soon, CEO Julie Wainwright says
Stacey Abrams makes the case for herself as Biden’s VP pick
One Good Thing: This animated miniseries perfectly captures the loneliness of autumn
Trump’s Hannity interview reveals a president out of touch with reality
Suspiria reimagines a cult classic as a bone-cracking tale of women, power, and pain