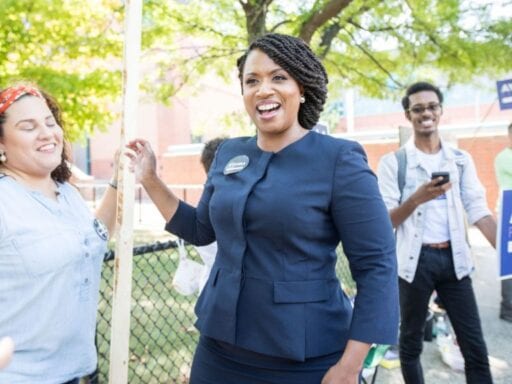 Pressley’s win is another victory for candidates of color.

Pressley’s Tuesday night victory over Rep. Michael Capuano (D-MA) all but guarantees that she will head to Capitol Hill as a newly minted representative in January, since there is no Republican challenging her in November.

The 44-year-old Pressley’s challenge to Capuano, himself a longtime progressive Democrat, sent a resounding sign that the voters in the Seventh Congressional District — a liberal area encompassing parts of Boston and Cambridge — were ready for a change.

Unlike other races around the state, Pressley wasn’t exactly running against a centrist Democrat. Capuano has burnished his liberal record for years; he voted against the Iraq War, supports Medicare-for-all, and is a member of the House Congressional Progressive Caucus.

The Boston City Council member’s campaign had national progressive groups excited that she could be the next Alexandria Ocasio-Cortez, but she’s not an outsider in Massachusetts politics. Pressley served as a senior aide to former Sen. John Kerry and interned for former Sen. Ted Kennedy’s office. She’s arguing that she will shake up Washington, DC, and is running on Medicare-for-all and a litany of other progressive issues.

But Pressley wasn’t just running on a progressive message, she was arguing that her own experience as a person of color made her more qualified to represent the district than an older white man — no matter how liberal. People of color make up the majority of the Seventh Congressional District’s residents, but as local public radio station WBUR noted, white people make up the majority of the voters there.

Pressley spoke on the importance of representing voters of color recently.

One of the few policy differences between Capuano and Pressley was a so-called “Blue Lives Matter” bill, which would make assaulting a police officer a federal crime. Capuano and the rest of the Massachusetts Congressional delegation voted for the House version of the bill, a decision Pressley criticized.

Her victory adds to a growing list of victories for candidates of color across the nation. Last week, Tallahassee Mayor Andrew Gillum pulled off an upset in Florida’s Democratic nomination for governor. In doing so, he made history; Gillum is Florida’s first African-American gubernatorial nominee.

Pressley’s win adds to an exciting moment for progressive groups, but also for black Democrats. The Democratic nominee for Georgia governor, Stacey Abrams, could make history as the nation’s first African-American woman governor if she wins. Other women of color, including Lauren Underwood in Illinois, Jahana Hayes in Connecticut, Ilhan Omar in Minnesota, and Lucy McBath in Georgia are the nominees for their respective congressional districts.

It’s something Pressley could not forget on Tuesday night.

How camping became the social distancing activity of the summer
We finally know some details about the Google and Verily coronavirus websites
Justin Amash just announced an exploratory committee for a bid for the White House
8 experts on why the Paul Manafort jury doesn’t have a verdict yet — and what it might mean
Joe Biden officially accepts his party’s nomination for president. Read his speech.
Why Congress’s antitrust investigation should make Big Tech nervous