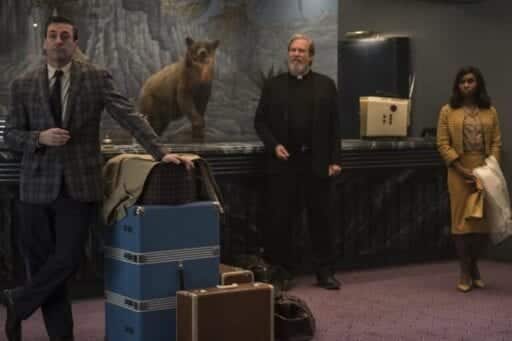 Notice: Undefined offset: 0 in /var/www/wp-content/plugins/seo-optimized-images/seo-optimized-images.php on line 131
Share
Loading...
In his 1944 play No Exit, the French existentialist thinker Jean-Paul Sartre trapped three strangers together in a drawing room and called it hell. Each member of the trio snipes at the others, experiences hatred and obsession, and drives the others crazy. They slowly realize that they’ll never escape these people. That’s their eternal fate.

Ever since, one of the work’s most enduring cultural contributions has been the oft-misquoted phrase “hell is other people,” which isn’t a mantra for misanthropes or introverts, but a rumination on how we can’t escape the gaze of others. As humans, we rarely stop viewing ourselves through others’ eyes — and that, to Sartre, was hell.

I’ve often theorized that all sitcoms, or at least all ensemble sitcoms, are actually set in either purgatory or hell and try to do roughly what Sartre did in No Exit. Stick a bunch of humans in a mostly enclosed space — an apartment, a newsroom, a bar called Cheers — and watch them bounce off each other, fall in love, drive each other crazy, and maybe learn some lessons about the nature of being and goodness for several seasons.

Movies rarely allow their characters to stay in the same place for long. But when they do — in, say, Twelve Angry Men, or Rope, or The Hateful Eight — they often take on those same sitcom qualities. There’s not much to do on a single set other than talk, argue, and manipulate one another.

That’s what these films are best at exploring: They show how people perceive one another and what they do to shield themselves from the gaze of others. And, of course, it all happens while we’re gazing at them, too, judging them by the choices they make.

All of these themes converge in Bad Times at the El Royale, an ambitious and kind of bizarre movie about religion, salvation, and who we really are. Technically, it’s set in a hotel that straddles the Nevada-California state line, but the otherworldly air at the El Royale gives away the game: This is a movie about purgatory and judgment, and whether anyone really can earn their way out.

It’s definitely no coincidence that the writer and director of Bad Times at the El Royale is Drew Goddard, who made his feature directing debut with 2012’s The Cabin in the Woods but cut his teeth writing on shows like Buffy the Vampire Slayer (which is set at the literal mouth of hell) and its spinoff Angel. He currently serves as an executive producer on The Good Place.

For this film, Goddard shifts the location to a fictional novelty hotel called the El Royale, at the border of Nevada and California near Lake Tahoe. The El Royale was once a favorite haunt of stars and celebrities — photos and headlines about Marilyn Monroe and the Rat Pack grace the walls — but it lost its gambling license a year before the movie’s main action begins in 1969, and business has slowed to almost nothing. Just one employee, a young man named Miles (Lewis Pullman), now handles everything from the front desk to housekeeping to bartending.

A thick red painted stripe bisects the El Royale, right down the middle of the parking lot and the lobby. On the west side is California, which is “warmth and sunshine,” according to Miles; on the east is Nevada, full of “hope and opportunity.” The two sides are decorated differently, and the hotel lacks a Nevada liquor license, so you have to drink on the California side, where the rooms also cost a dollar more per night.

One night, a bunch of strangers show up at the hotel: a priest named Father Daniel Flynn (Jeff Bridges), a gregarious traveling salesman named Laramie Seymour Sullivan (Jon Hamm), a singer named Darlene Sweet (Cynthia Erivo), and a mysterious and glamorous young woman who signs in to the ledger by simply writing “fuck you” (Dakota Johnson).

There’s something fishy about everyone, and they’re all eyeing one another. But in the manner of strangers in a hotel, they don’t get too friendly, even after Father Flynn asks Darlene if she’d like to eat dinner with him.

It quickly becomes clear that something is about to go down, especially once the blue skies turn to a dark and stormy night. But after The Cabin in the Woods, any movie made by Drew Goddard is expected to be full of twists, and Bad Times at the El Royale delivers on that promise — so outlining what happens next in any detail risks spoiling the fun.

What I can tell you is that, as the plot continues to thicken and it becomes harder for anyone to imagine leaving the hotel, Bad Times at the El Royale turns theological, or at least philosophical. Who is bad? Who is innocent? Does it matter what we believe? And what really makes us who we ultimately are?

Bad Times at the El Royale packs a lot of ideas and concepts into its runtime, but its chaos feels controlled

Bad Times at the El Royale boasts a cast of versatile performers in Bridges, Hamm, Johnson, and Erivo (who sings, gloriously) — as well as Chris Hemsworth, who plays a Charles Manson–like cult leader. All of these talented actors are conventionally attractive by Hollywood standards, but over their careers, they’ve each shown a range that verges on that of a great character actor instead.

The sort of balancing act they all must perform — making you wonder whether what you’re seeing is genuine or subterfuge — makes the first half of the film feel like an Agatha Christie–style thriller, in which a crowd of mysterious strangers are brought together and a crime occurs, even as it’s seeding the philosophical reflections still to come.

But there’s a lot packed into this movie: ruminations on the 1960s in America, race, war, religion, music, surveillance culture, and much more — so much that it’s probably inevitable that some of it just doesn’t work.

The best parts of Bad Times at the El Royale feel like scenes in a play, with groups of characters isolated in some of the hotel’s rooms before they eventually all end up in the lobby, talking to and second-guessing one another. The resulting conversations, suspicious looks, and passing of judgment are when the actors are able to shine.

But at one point, the storytelling turns nonlinear, with the same moments shown a bunch of different ways, and it’s not clear it adds much to what the film is trying to say. The same goes for flashbacks that fill in backstory for some of the characters — you can see how both techniques might make parsing the plot a little easier, but in spelling out the details, the movie loses some of its allusive punch.

And yet there’s a strange charm to Bad Times at the El Royale, which never really shows its hand. Part metaphorical (which it jokes about halfway through), part homage to old Hollywood, part whodunit, and part social commentary on an America reeling from mid-century chaos, it’s overstuffed but still feels controlled.

In the end, one of the movie’s biggest questions is whether we can atone for our wrongdoing on Earth, and who does the atoning. If, as in some religious traditions, purgatory (or a place like it) is where sinners are sent when they aren’t quite bad enough for hell and are given the chance to earn their way to heaven, then the El Royale — set on a dividing line between two places, inhabited by people who misbehave in complex ways — is a fairly obvious stand-in for that place. It’s an existential crossroads.

The film’s purgatory also functions as a microcosm of an America trying to get a grip on its sins from the 1960s; Richard Nixon, J. Edgar Hoover, cruelly casual racism, roguish celebrities, doomed Hollywood starlets, hippie cult leaders, gruesome random murders, and the Vietnam War are all in the story’s background. In their own ways, each of the characters represents some element of that decade that could be seen through rose-colored glasses or much darker ones, depending on who’s looking. (One of the plot’s surprises involves literal looking.) And they’re all acutely aware that if they’re found out for who they really are, there may be consequences to pay.

I won’t spoil them here, but the afterlife symbols arguably get a little heavy-handed by the end of the movie, and that can make it feel ponderous — like it’s trying to explain its own concept rather than inviting viewers to discover it for themselves. And yet, in its best moments, the movie does avoid becoming too literal. Bad Times at the El Royale is most effective when it makes us work to discern what people really mean by the words they’re saying.

It’s a compelling film about coming near to the end of one’s life and trying, with a bunch of other people, to figure out what kind of afterlife you deserve. And it suggests that redemption might be available, even to characters who may have committed the worst sins they can imagine.

But not just because they say they’re sorry. In Bad Times at the El Royale, it’s not the gesture of repentance, being sorry for one’s sins, that’s important. Rather, it’s the act of confessing those sins that matters. People are always talking about confession in the El Royale, and those who earn their way out of the state-straddling hotel are those who speak freely about their past misdeeds in time for someone else to see them for who they really are. If you confess, someone can absolve you — even if they’re not the one who was wronged, and even if they’re not particularly religious themselves.

To cram all that into a two-hour film is impressive, and so even when it stumbles, Bad Times at the El Royale feels like a deeply weird and wondrous accomplishment, especially coming from a risk-averse major movie studio like 20th Century Fox. It taps into something that cinema and TV have been obsessed with for decades: how we can be saved, who saves us, and what we need saving from. And when it works, it’s a good time indeed.

Bad Times at the El Royale opens in theaters on October 12.

“I don’t want to be a depressing drumbeat”: TV comedy legend Greg Daniels on his daring new shows
The global coffee crisis is coming
Meet the woman who made Netflix get rid of its most annoying feature
The New York Times’s Trump-bashing op-ed from a senior Trump official, explained
How the Venus de Milo got so famous
4 ways to be smarter about land use to fight climate change