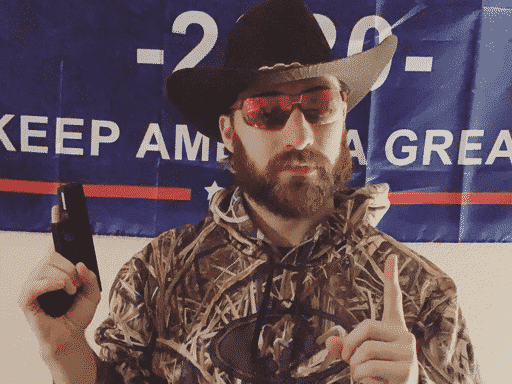 The former BuzzFeed employee’s arrest for his role in the Capitol riot reminds us alt-right racism was never ironic.

Before he evolved into an extremist, Anthime Joseph “Tim” Gionet, better known on the right-wing internet as “Baked Alaska,” was Extremely Online.

Gionet, whom the FBI arrested Friday for his role in the January 6 insurrection at the US Capitol, spent years chasing clout across the web. And in doing so, he left a track record of a bizarre — but familiar — downward spiral into white supremacy.

Gionet, whose performative trolling has gotten him banned from most mainstream social media platforms (and even Uber), livestreamed a half-hour video filmed within the heart of the Capitol mob. The FBI subsequently used the video to identify and arrest dozens of the rioters captured on camera, including Gionet himself. He was arrested on multiple counts, including unlawful entry, violent entry, and disorderly conduct on Capitol grounds.

An affidavit filed by an FBI agent cited Gionet’s own livestream as evidence of his illegal conduct, and quoted numerous statements Gionet made as he stormed the Capitol. At one point, the FBI notes he confronted a Capitol Hill police officer, stating:

“You’re a fucking oathbreaker you piece of shit,” “fuck you” approximately four times, and, “you broke your oath to the constitution.”

He also proclaimed things like, “1776, baby,” and “America First is inevitable. Fuck globalists, let’s go!” while pleading with other protesters not to leave the building.

The livestream also revealed to Arizona authorities that Gionet had violated the conditions of his bail by leaving the state; he had been arrested after a December incident in which he allegedly pepper-sprayed a bouncer at a Scottsdale bar. Gionet posted bond in the bond violation case on Friday.

It’s tempting to ask how a former Vine prankster (and temporary Andrew Yang supporter) who once ran social media for BuzzFeed — yes, BuzzFeed — wound up becoming the kind of real-life right-wing troll who shouts “We gotta preserve the white race, bro!” at random teens on the street.

But if the internet allowed Baked Alaska to gain a dollop of mainstream notoriety, it also arguably drove him — and countless trolls like him — toward the outer reaches of society, into the dark embrace of internet extremism and neo-Nazi beliefs.

Like many of his alt-right ilk, Gionet started out as the classic internet troll

Long before he was headlining neo-Nazi rallies, Gionet grew up in Anchorage, Alaska, son to a pharmacist and nurse who sent him to a private Christian academy, where he was voted senior class president. After graduating from high school in 2006, he studied film and marketing at a Christian college in Los Angeles. There, he gained an internship at Warner Bros. and worked his way into a paid social media position, which is where he first began cultivating his online persona.

His Warner Bros. boss Kevin Lyman later described him as “a nice guy.” But he also seems to have been perceived as a manipulative bully; according to an Anchorage Daily News profile of Gionet, people who knew him as a teen are reluctant to go on the record about him now because they fear the way he might retaliate.

That fear of retaliation isn’t unwarranted.

Gionet gained his first taste of the limelight as a low-level Viner and YouTuber, where he routinely engaged in pranks like trashing grocery stores, pouring milk over himself, or harassing Target employees with not-so-ironic racism — videos that routinely racked up tens of thousands, and eventually millions of views. He also styled himself as a parody rapper, writing bizarrely empty rhymes like “Bull Moose Trappin” or “I Live on Glaciers.” Another fawning 2013 Daily News profile revealed Gionet trying hard to pitch himself as just standing on the cusp of broader fame, reaching for, “YouTube, Spotify, iTunes, maybe even [a] reality show.”

Yet that profile also noted that Gionet’s small YouTube following was “a cyber platform full of critics who aren’t constructive and can’t seem to take a joke.” This passing remark may have held what would prove to be the real key to Baked Alaska’s success: internet contrarianism.

In this turn toward contrarianism, Gionet certainly wouldn’t be alone: the entire “do it for the Vine” ethos of prankster internet made a nihilistic chase for clout into a whole life philosophy for countless Viners and YouTubers. But Gionet clearly wanted to weaponize empty content-making as a part of his brand. “I want people to superficially judge me super hard,” he told the Anchorage Daily News in that 2013 profile. “So they think I’m a wacky douchebag; I’ve always been the underdog.”

In other words, Gionet was primed to embrace the reactionary online politics of the Trump era.

On the back of his Vine success, Gionet got a job at BuzzFeed in 2015, first running their Vine account and later their Twitter feed as well. At BuzzFeed, Gionet first claimed to be libertarian and at one point reportedly kept a Bernie Sanders picture on his desk. But then he started wearing MAGA hats around the office, and he attended the 2016 Republican National Convention.

His Twitter and Vine accounts also turned increasingly towards “ironic” racism. According to BuzzFeed’s then editor-in-chief Ben Smith, who recently wrote about Gionet for the New York Times, most people on staff viewed Gionet’s performative Trumpism as just that — ironic. This view prevailed on staff despite ample evidence at the time that the alt-right internet weaponized irony in order to mask its actual, sincere racism.

BuzzFeed staff didn’t fully process that Gionet was serious until late 2016, when he abruptly announced he was leaving the company to serve as the tour manager for white supremacist instigator Milo Yiannopoulos, who was embarking on a cross-country lecture series of college campuses. Many of these schools subsequently canceled his appearances after Yiannopoulos and his fans stoked counter-protests, increases in hate crimes, and violence at many of his tour stops.

Yiannopoulos, like Gionet, had once been a member of the mainstream media before fully embracing the alt-right. He and Gionet were both eventually kicked off Twitter for their increasingly extremist brand of “trolling,” which in Gionet’s case included quoting actual Nazi slogans and “joking” about gas chambers.

But Gionet’s turn away from the mainstream also got him mainstream media attention, like a 2017 Business Insider profile in which he claimed that a BuzzFeed staffer asking him not to say “spirit animal” was the politically correct final straw that sent him fleeing progressive politics.

Months later, in September 2017, Gionet went viral for once again pouring milk on his face — after getting maced during the Charlottesville, VA Unite the Right rally, where he was a prominent demonstrator. The AV Club dubbed him “the internet’s saddest neo-Nazi” and chronicled the many times over the years when Gionet’s racism had led to other cringe-inducing self-owns. But even the negative attention manifested clicks and traffic to his YouTube channel and other social media platforms. Even Yiannopoulos wrote in later revealed emails that Gionet “seems more interested in his career as an obscure Twitter personality than my tour manager.”

Gionet, at that point, still had supporters claiming that his actions were all “ironic.” But as Gizmodo queried at the time, “How long does someone get to joke about endorsing Nazism before they’re officially a Nazi? Is there a magic number of times people get to “jokingly” say they’re a Nazi before we take them at their word?”

Gionet peddled ironic racism, but whether he was sincere is beside the point

Much of Gionet’s behavior after the Yiannopolous tour seemed to support the idea he was indeed doing much of this purely for clout rather than out of any deep personal conviction. The biggest evidence for this argument is that he kept swiftly about-facing.

After the 2018 Christchurch, New Zealand mass shooting, in which the shooter livestreamed the attack and posted a manifesto full of alt-right memes, Gionet garnered still more media attention by claiming to be repentant — saying that he had abruptly figured out in the wake of the shooting that all of the alt-right’s white supremacist rhetoric was sincere. In a since-deleted YouTube video, he claimed to have been brainwashed by the alt-right cult, and denounced the movement’s violence.

“I really thought this was just fun memes and jokes and edgy 4Chan posting and all this stuff, and then you get to the end of this rabbit hole and you realize these guys are serious,” Gionet told the Daily Beast.

Media outlets were skeptical that this pivot was sincere. It didn’t help that Gionet also seemed to be entirely clear-eyed about the exploitative tools that white supremacists used to recruit and gain followers. “I don’t think the deplatforming approach works because the alt-right has learned to exploit deplatforming to convince their adherents that they can’t possibly rejoin mainstream society,” he bluntly told the Daily Dot at the time.

But despite this rhetoric, Gionet rapidly seemed to give up on rejoining mainstream society himself. Instead, he went back to a full-on embrace of racist rhetoric and Trumpist propaganda, deleting his earlier videos of repentance. He got banned from more platforms: Facebook, YouTube, Twitch, even Airbnb.

By the time the pandemic arrived in 2020, Gionet could be seen on the right-wing-friendly streaming platform DLive harassing store employees and refusing to wear masks. January 6 found him standing in the Capitol, chanting, “who’s house? Our house!” alongside avowed neo-Nazis.

“UNLEASH THE KRAKEN”… Houston social media star nicknamed “Baked Alaska” arrested for role in US Capitol chaos. Here are some of his more memorable alleged quotes from Jan 6 pic.twitter.com/xg88YAUXjk

On one level, none of this internet history is exactly typical. But on the other hand, countless average YouTubers who’ve gotten sucked into the radical online sphere of right-wing extremism have had similar trajectories of pursuing ironic racism for the lulz until it was no longer ironic.

That pattern of trolling until you aren’t anymore has happened alongside the algorithmic spread of disinformation and conspiracy-mongering across social media. Ultimately, the combination of alt-right trolls intentionally obfuscating truth in order to spread their agenda, and the unintentional confusion about reality that conspiracy theories like QAnon help propagate, has created a chaotic, emotion-fueled online environment in which people like Gionet have thrived the only way they know how: through constant disruption.

“It’s not clear what Mr. Gionet actually believes, if anything,” Smith concluded in the Times. “And really, I’m not sure I care.” Regardless of what his actual intention is, the end result of Gionet’s performativity is a blanket contribution to white supremacist violence.

Yet what’s perhaps saddest in all of this is how little humanity seems to lie beneath Gionet’s trolling. In the video where he tries and fails to bait random teens into supporting white nationalism, he babbles vaguely, apparently referring to white people, “We will… go away if we don’t do something now.” It’s unclear what that something is, and while his words are urgent, Gionet seems bored — he doesn’t even look particularly interested in his own game. But as long as a camera is pointed in his direction, does anything else matter? As he said while cleaning mace from his eyes in Charlottesville, “Keep streaming — keep streaming!”