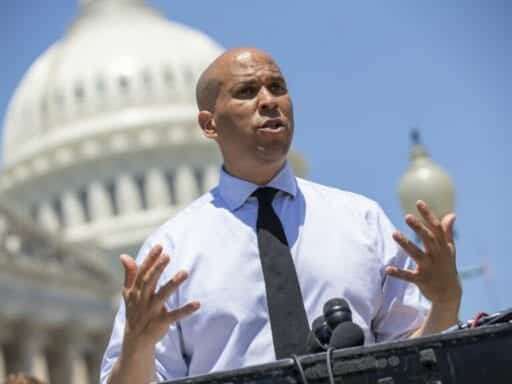 Lower-income customers are disproportionately affected by such penalties.

Sen. Cory Booker is taking aim at bank overdraft fees, which users incur if they spend or withdraw more than their available checking account balance. These fees have become a crucial source of revenue for financial institutions and have long targeted low-income customers who struggle the most to stay out of debt.

Booker’s newly proposed legislation — informed by a survey of several large banks that his office conducted last year — would bar financial institutions from charging overdraft fees on debit card transactions and ATM withdrawals. The bill would also restrict the frequency of such charges on payments made by check.

“It’s been well-documented for many years that banks have used a variety of methods to push people into incurring overdraft fees to boost their income,” said Lauren Saunders, an associate director at the National Consumer Law Center, who helped work on the legislation. “They do a lot to push huge costs on the people least able to bear them.”

How exactly did overdraft fees come to be?

Overdraft fees were originally a penalty primarily associated with checks. If a customer submitted a rent check, for example, but didn’t have enough money in his or her account, the bank could still let the check go through and then hit the person with an overdraft fee. In this context, customers would incur the additional cost but also be spared the inconvenience and charges tied to the check bouncing.

As debit cards gained popularity, banks initially rejected transactions if users didn’t have enough money in their accounts, explained Rebecca Borne, of the Center for Responsible Lending, who contributed to the bill as well. Institutions quickly discovered, however, that enabling such transactions to go through and charging the customer a subsequent overdraft fee could be a handy source of income.

“When debit cards first came to be, they were the piece of plastic that couldn’t get you into debt,” Borne said. “In the late ’90s, that shifted.”

Since then, financial institutions have seen such fees contribute to a massive chunk of their income: In 2016, US customers paid roughly $15 billion in overdraft and bounced check fees. That’s the equivalent of nearly 10 percent of the net income that banks raked in that year.

Their attachment to these fees has only grown, with many institutions charging customers roughly $35 every time they overdraw their accounts. This flat fee doesn’t change much based on the amount of the overdraft — if someone goes $5 over their balance versus $500, for example, they must often still deal with the same penalty. A 2014 CFPB study found that users were paying a median overdraft fee of $34 for debit card payments of $24 or less. As the Washington Post has calculated, that is comparable to a loan with a staggering 17,000 percent annual rate.

Overdraft fees are among the income sources that are making up a higher and higher proportion of banks’ revenue, even as the income they’ve derived based on interest goes down, per Pew Charitable Trusts.

As banks have become increasingly reliant on these fees, they’ve also resorted to more tactics that take advantage of customers who are making these payments. As Booker’s office found last year, some banks even reorder the sequence in which they process a person’s transactions — so the most expensive transaction is processed first.

As a result, if that payment overdraws the account, every other purchase after that could also potentially trigger an overdraft fee. Theoretically, this could mean that one customer is hit with multiple $35 charges in one day — a substantial cost — especially if maintaining a positive bank balance is already a challenge.

“It’s been such a cash cow for banks. They’re deeply committed to their overdraft revenue,” Borne said. In the late 2000s, this activity attracted the attention of the Federal Reserve, which concluded that banks were not giving consumers enough information about how they were levying these penalties. At the time, the agency established rules that would require banks to get consumer opt-in, or consent, for participating in any overdraft programs.

Borne said this effort temporarily hurt banks’ revenue, but institutions quickly found a way around it. She noted that many banks’ marketing explicitly touts free checking accounts and obscures how such fees and opt-in programs work. A 2014 Pew study found that more than 50 percent of consumers had no clue they had opted in to an overdraft program. Pew has also found that 70 percent of people who have overdrafted in the course of a year did not know they could get their debit cards declined for free.

Not only is this process opaque, it’s also one most likely to hurt people who are already low-income and living paycheck to paycheck. Users who may be overdrafting their accounts more frequently are likely to already have a low balance, with these fees only adding to their other costs. This dynamic can spur a detrimental cycle in which they keep digging themselves deeper into debt.

One study notes that 18 percent of account holders pay more than 90 percent of overdraft and insufficient funds fees collected. The CFPB has also found that the majority of frequent overdrafters have lower credit scores and daily balances and are broadly more financially vulnerable than those who are not. Almost seven in 10 of heavy overdrafters make less than $50,000 per year.

The consequences of exorbitant fees can ultimately be dire.

What Booker’s bill would do

Booker’s legislation, dubbed the Stop Overdraft Profiteering Act of 2018, would bar banks from imposing overdraft fees on debit card or ATM transactions. It would also curb the number of overdraft fees that could be levied on check-based transactions and prohibit banks from reordering the sequence of user activity.

“Overdraft fees fall on those least likely to be able to afford them — individuals for whom a $35 overdraft charge could push them over the brink into financial ruin,” Booker said in a statement. “Our bill would end these unfair practices many banks use that leave some consumers — especially those that are the most vulnerable — trapped in a vicious cycle of poverty.”

If overdraft fees were eliminated as the bill outlines, a few things could happen. More customers could see transactions get outright declined, so they wouldn’t be able to follow through on purchases, but they also wouldn’t be hit with a sudden unexpected fee. Banks could also treat the money that customers are taking out the same way they treat other credit — by charging an interest rate on it.

“Overdraft protection is really a form of credit. You’re borrowing it and repaying later,” Saunders said, adding that this isn’t how overdrafted funds are currently handled. “They don’t price it they way they do with credit. That causes the cost and affordability to really skyrocket.”

Borne said the implementation of this bill could compel banks to offer more small-dollar loan products to customers and provide more transparency about how they are being charged for, in effect, borrowing this money. “If the reasonable safeguards of Sen. Booker’s bill would become law, we would see a shift in the market away from the back-end fees toward upfront fees,” Borne said. “It would shift them to upfront pricing which is a more competitive and healthy way for the market to work.”

Better Markets’ Dennis Kelleher said that more information would certainly help consumers navigate this murky process. “The problem when you’re getting hit with a fee is that it’s completely nontransparent and it’s almost completely unrelated to the actual cost. The customer is at an extreme disadvantage to the bank,” he said.

Rep. Carolyn Maloney has also introduced numerous bills tackling this topic in the House —which limit the number of fees that consumers can incur — and Booker’s office noted that they integrated components of her legislation into the new bill.

This bill is just the latest in a swath of legislation tackling everything from stock buybacks to noncompete clauses, which Booker has introduced in recent months in order to address various forces that are seen as contributing to rising inequality. An aide from his office said that much of the impetus behind this focus has been driven by constituent feedback. It’s also possible such bills could be part of an effort to dial up his accountability bona fides ahead of 2020.

CFPB was scrutinizing overdraft fees, but it’s been dropped from the agency’s agenda

Booker recently led a letter alongside Sen. Elizabeth Warren and other Democrats questioning the agency’s decision to shift its focus. “Overdraft fees contribute to a vicious cycle from which vulnerable consumers struggle to recover,” they wrote. “This action undermines one of the CFPB’s core functions: to protect consumers from unfair, deceptive, and abusive practices.” Booker’s office said they have yet to hear back.

A Booker aide notes that this bill is partly an opportunity to step in and fill that regulatory gap. The legislation is co-sponsored by Sen. Sherrod Brown (OH), a top Democrat on the Senate Banking Committee, which gives it more heft, even though it stands little chance of passing in a Republican-dominated Congress.

Despite this likelihood, however, it’s possible this bill could heighten pressure on banks to voluntarily change their practices, while raising awareness about this specific problem. “What would be nice to see is recognition from the banking industry,” Borne said.

Bernie Sanders narrowly leads Joe Biden in a national ranked-choice poll
China and India are in a dangerous standoff over a hotly contested border
Photos: What the youth climate strike looks like around the world
Why Mike Pence’s pink-looking eye caused so much speculation
Why the street gang MS-13 is an American problem
The strange sight of a solar eclipse on Mars