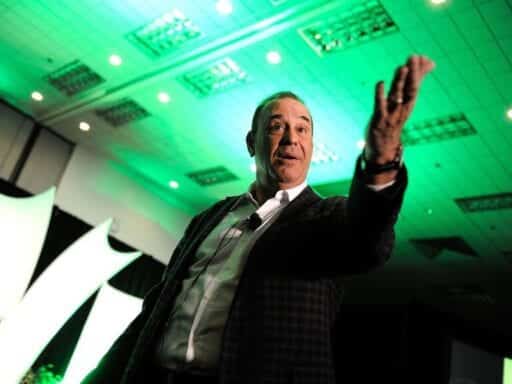 The host of the popular show has been talking about retail experiences for 40 years. Now he’s in the hard seltzer business.

When you go to a store to buy a shirt in 2019, you’re not really going to a store, and you’re not just buying a shirt. No, instead, you’re engaging with an “experience,” and that shirt you bought is actually an investment in a brand, so you too can share a piece of its aspirational image.

This is why last October when Timberland opened its new New York City store — sorry, experience — it included a “Rain Room,” a “Snow Room,” and 2,000 plants in the hopes that in between all of the selfie-taking maybe you will also buy some boots. It’s why the at-home bike company Peloton likes to say that it “sells happiness” instead of bikes, and why the couch brand Burrow wants you to visit its stores not to purchase a couch but to head to the downstairs movie theater and grab a drink (it also absolutely wants you to purchase a couch).

All of this retail jargon feels relatively new and novel, geared towards the enigmatic millennial consumer known for despising any whiff of advertising that sounds like advertising and eschewing supposedly beloved product categories (bars of soap, physical banks).

But there’s one person who’s been talking about this stuff throughout the 40 years he’s been in the business, the last eight of which have been televised: Jon Taffer.

The bullish, 64-year-old host of Bar Rescue, formerly on Spike TV, since renamed the Paramount Network, is not the image of “millennial retail whisperer” one might assume to be spreading the gospel of “experience” and “relevance” to brands. He’s best known for turning mismanaged dive bars in Rust Belt towns into upscale beer gardens by revamping menus, installing copper bar tops, Edison bulbs, and possibly some decorative maps. He does this by shouting extensively at said owners while wearing suits. It is, naturally, a fantastic show.

But aside from the compelling personal drama and messy financial issues that come with a show about bar owners, the “rescuing” part of Bar Rescue hinges on Taffer explaining to his subjects a fundamental rule of sales: You’re not really selling a product, you’re selling an experience. It’s even alluded to in the show’s opening sequence: “Running a bar is not just a business. It’s a science. From the height of the stools, to where your eyes fall first on a menu, no one knows more about bar science than Jon Taffer.”

“I don’t believe that we make drinks or food in the bar business,” he says when I meet him in person at the Vox office in New York. “Food is not the product. Food is the vehicle. The product is the reaction. The guy in the kitchen who thinks he’s cooking an entree, he’s not. He’s cooking a reaction and achieving it through the entree.”

It just so happens that Jon Taffer is in the business of making products now. After releasing a line of cocktail mixers earlier this summer under the brand name Taffer’s Mixologist, on September 16 he announced a forthcoming collection of hard seltzers, which will be available in October. Similar to others in the category that is, mindblowingly, skyrocketing, his is low-ish in alcohol by volume (5 percent), low-ish in calories (100), and is considered a vaguely healthier alternative to beer (there’s no added sugar). His flavors are more cocktail-inspired than seltzer-inspired — instead of simple options like raspberry or grapefruit, there’s strawberry basil and cucumber jalapeno; an elderflower version will be available later in the year.

But these products are also subject to the Taffer philosophy of experience over physical things: “Today, when we create products, relevancy is key,” he says. “You wouldn’t go to a place that’s empty, [because then] you’re irrelevant. You wouldn’t go to a place that the prices are too cheap because you didn’t want to go out with guys who were there for 50 cent beers. The brand [Taffer’s Mixologist] creates relevancy. Strawberry basil creates relevancy because it’s a unique flavor that has a culinary flair.”

Relevancy, Taffer argues, is the only thing that matters in an age where marketing takes place online. He offers an example: “If you posted the worst picture of your life — your hair up, you’re a mess — on social media, somebody’s going to say, ‘Looking good, girl, look great!’ You get this instant gratification. So when I go to a bar, I want to be relevant; I want food and cocktails that I can photograph and put on social media.”

Taffer has a lot of other thoughts of what bars and retail stores are doing right and wrong (ordering tablets: bad; smartphones: “the Antichrist of social interaction”; the city of Las Vegas: doing a great job of attracting younger visitors with dining and entertainment rather than gambling). He celebrates the death of velvet ropes and the VIP section. “We can’t be picky. There’s only so many people out there,” he says.

That’s also because bars and stores are all fighting the same opponent. “[They] now have competitors on every corner now. It’s called the internet,” he says. With the rise of what Kaitlyn Tiffany called the “homebody economy” in a Vox piece, or the unprecedented convenience of on-demand food, alcohol, shopping, and entertainment paired with the glamorization of staying home for the nebulous purposes of “self-care,” brick-and-mortar establishments need to offer something you can’t get alone in your own bedroom.

“You can order a canned cocktail, but you can’t get interaction online,” he says. “I can’t look in your eyes, get to meet you, get to talk, get to share food with you. If you take the interaction out of a bar, heck, you can hear the same music at home, watch the same video programming at home, drink the same stuff at home. You don’t need me anymore. So at the end of the day, a bar still has to be fun.”

It’s the same thing he’s been saying for 40 years, and the same thing we’ve heard him tell bar owners all over the country for the past six seasons on Bar Rescue. He even engineered one of the most enduring architectural components of nightclubs: The butt funnel (his name), or the 30-inch opening into a dance floor, through which two people can pass by each other, but just barely, so that they’re forced to acknowledge the other.

Alternate Tafferisms he says all bars should employ: A seating plan so that everyone’s eye levels are within 10 inches of each other (i.e. high stools on lower ground, low stools in elevated areas), and two staircases to every floor (“Let’s say you guys are sitting up there. I like you. I want to interact with you. So I walk up the staircase to walk by. I hit a dead end, I feel like an idiot. I got to turn around and walk back the other way, you know exactly what I’m doing. I’m busted. But if there’s a staircase on the other side, I can walk through with purpose.”)

What is it, exactly, about that human interaction that makes us want to buy stuff? Taffer argues it’s similar to the disparity between someone’s online profile and the vibe you get when you’re actually sitting next to them. He worries, like most people do, that as our lives become more entwined with the internet, our relationships suffer.

The irony is that in launching a product, Taffer now has to market it on the very space that bars are competing against. Particularly notable about the branding of Taffer’s Mixologist is how it adheres to the colorful, direct-flash, minimalist aesthetic popular among brands targeting millennial women. The cans themselves, Taffer points out, are pretty and Instagrammable, and have the tall, slender shape that differentiates it from beer. But, of course, he hopes that you’ll drink it in a bar.

CBS gave Les Moonves a graceful exit he didn’t deserve
David French and I debate polarization, secession, and the filibuster
The menacing symbolism of the noose
Halloween’s post-credits “scene,” explained
People are buying boxes of unknown stuff from Etsy and eBay sellers
Republicans are making it harder for people to vote in key 2018 elections