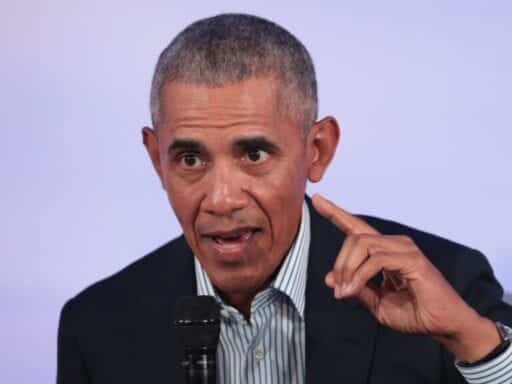 “I don’t care” if it’s not “your perfect candidate.”

Barack Obama exhorted some of Silicon Valley’s wealthiest Democratic donors to “chill” in their debate over the party’s candidates, seeking to ease the tensions among tech billionaires who have broken into separate camps backing Pete Buttigieg, Joe Biden, and — most surprisingly — Elizabeth Warren.

Even if the nominee is not “your perfect candidate,” Obama said, “I don’t care.”

At a high-dollar fundraiser on Thursday nestled across the street from hiking trails winding through the Los Altos Hills in California, the former US president downplayed 2020 candidates’ differences as merely disagreements over “tactics” — even as he reiterated concerns about his party possibly going too far to the left.

“Everybody needs to chill out about the candidates,” Obama said. “But gin up about the prospect of rallying behind whoever emerges from this process and making sure that we’re hitting the ground running.”

Obama’s remarks were some of his most direct and candid of the entire Democratic campaign so far. Over hors d’oeuvres that included tea-smoked duck and red curry cornbread, Obama told about 100 donors — some of whom paid hundreds of thousands of dollars to attend — to put to rest any internecine party battles once the primary concluded.

“The choice is so stark and the stakes are so high that you cannot afford to be ambivalent in this race,” he said.

Obama has gingerly handled the 2020 race up until recently, when he has seemed to offer some veiled criticism of the further-left candidates, Bernie Sanders and Elizabeth Warren. Obama said last week that most voters don’t want to “tear down the system.”

And though he was calling for unity, Obama reiterated some of that message on Thursday.

“When you listen to the average voter — even ones who are stalwart Democrats, are more independent or low-information voters — they don’t feel that things are working well but they’re also nervous about changes that might take away what little they have,” he said. “So there’s always a balance in politics between hope and fear.”

The event — which featured a top-ticket price of $355,000 — is expected to raise over $3 million for the Democratic National Committee. The event was hosted at the home of Karla Jurvetson, an ascendant Democratic megadonor in Silicon Valley politics. Other key fundraisers for the event included former Twitter executive Katie Jacobs Stanton and former Obama ambassador Denise Bauer.

Stephen Curry, the star point guard of the Golden State Warriors, also attended alongside his wife Ayesha, who spoke at the event.

Obama’s speech followed a call to arms by Democratic powerhouse fundraiser Amy Rao, who called on the 100 donors gathered in a cavernous living room to “give so much that it hurts.”

Obama echoed that sentiment at the conclusion of his remarks.

“If you’ve got a lot of money, give some more money. You can afford it. I know because I can afford it,” Obama said. “I see what’s happening with your companies. You can do more.”

Bernie Sanders endorses Joe Biden: “We need you in the White House”
Why Pelosi calling Trump’s tweets racist on the House floor turned into chaos
Inside the final days of the $35 million startup meant to fix the Democratic Party
Most courts are closed due to coronavirus — but not those that serve high-risk populations
Latinos feel worse off under Trump, and more energized to vote
Minutes after pledging to not lie, the new White House press secretary lied a whole bunch