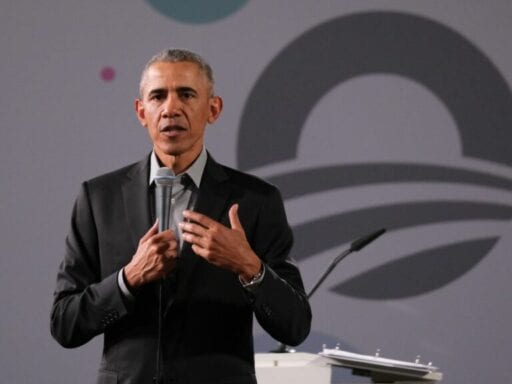 “We have to be careful in balancing big dreams and bold ideas with also recognizing that typically change happens in steps,” Obama said.

Former president Barack Obama touched on growing divisions within his own party, warning against pushes for ideological purity that can result in a “circular firing squad” in a town hall organized by The Obama Foundation in Berlin on Saturday.

While taking audience questions about the frustration that comes with lack of change, Obama expressed concern about a lack of compromise in Washington, and said he specifically worries progressive politicians could be alienating potential allies.

“One of the things I do worry about sometimes among progressives in the United States — maybe it’s true here as well — is a certain kind of rigidity where we say, ‘Oh, I’m sorry, this is how it’s going to be,’” Obama said. “And then we start sometimes creating what’s called a ‘circular firing squad’ where you start shooting at your allies because one of them is straying from purity on the issues.”

The former president said he believes this approach “weakens” movements, and that those that would like to see a progressive agenda “have to recognize that the way we’ve structured democracy requires you to take into account people who don’t agree with you.”

Obama ended his speech by advocating for patience and incremental change: “We have to be careful in balancing big dreams and bold ideas with also recognizing that typically change happens in steps. And if you want to skip steps, you can. Historically what’s ended up happening is sometimes if you skip too many steps you end up having bad outcomes.”

What else did Obama talk about?

Obama took several audience questions, and used them to speak at length about issues facing Europe and the United States.

While the former president did not directly address President Trump’s recent meeting with NATO Secretary General Jens Stoltenberg or Trump’s criticisms of the organization (the current president has said “NATO is as bad as NAFTA,” for example), Obama explained why he believes NATO is important.

“I can’t say exactly what the United States and NATO are doing right now,” Obama said. “I recognize that there are some strains. … I think it’s important not to separate military alliances — the strength of Europe over the last 20, 30 years has not been because there were a bunch of missiles fired. It was because — thankfully — it was because ideas won.”

Speaking about immigration in Sweden, Obama said, “We can’t label everybody who is disturbed by immigration as racist. You know, that’s a self-defeating tactic. You push away potential allies, people who maybe just haven’t thought about it … but if they’re exposed to new information and they’re meeting people from other countries and they understand the nature of these different traditions and they see that others are eager to work with you, then suddenly they go, ‘Ah, okay.’”

Obama also encouraged people to take a more active role in government, arguing citizens with new ideas should reach out to politicians who are open to them.

“Sometimes we think of the government as this ‘thing’ that is separate from us,” Obama said. “But if we’re active citizens, then part of our job is not just to get government to respond to you — it’s also to improve the government.”

He added, “The point I’m making is, in addition to electing good people, one of the things that you can do, I think, is encourage and work with governments to identify where are bottlenecks, where are inefficiencies that could potentially be solved and then finding allies to help improve processes inside of government.”

In an Obama Foundation event earlier this year, Obama called for “new blood” in the political ranks, but new, progressive House Democrats have at times found themselves at odds with more established party figures over issues from refusing to take corporate PAC money to big ideas like Medicare-for-all and the Green New Deal.

For the most part, however, Democrats have been following Obama’s lead and been careful to maintain unity in public.

As Vox’s Ella Nilsen notes, when Speaker Nancy Pelosi responded to a question about the Green New Deal championed by Rep. Alexandria Ocasio-Cortez (D-NY) by saying, “It will be one of several or maybe many suggestions that we receive. The green dream or whatever they call it, nobody knows what it is, but they’re for it right?” Ocasio-Cortez didn’t take it as a slight. Instead, the freshman Congresswoman said, “I think it is a green dream. I don’t consider to be that a dismissive term.”

Similarly, policy divides between Democratic 2020 candidates on issues like trade, reparations, and even eliminating the filibuster have not led to open hostilities — at least not yet.

How the press calls elections, explained
The decline of the suit
The Trump administration will now allow doctors to discriminate against LGBTQ people
A disgraced evangelical leader returns to ministry after #MeToo. He won’t be the last.
The 2020 Tonys are officially postponed
Elizabeth Warren isn’t done yet