Barack Obama’s crucial insight into the crisis of American democracy 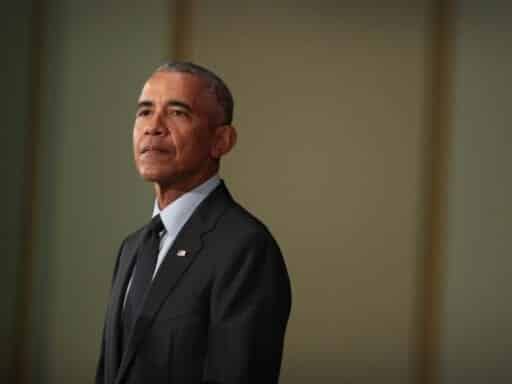 In a fiery campaign-style speech on Friday, former President Barack Obama attacked Donald Trump by name for the first time since leaving office. But then he went further than that — calling out the Republican Party by blaming it for Trump’s rise.

“It did not start with Donald Trump,” Obama said of the current crisis in American politics in his address to students at the University of Illinois Urbana-Champaign. “He is a symptom, not the cause.”

He goes on: “Neither party has been exclusively responsible for us going backward instead of forward. But I have to say this because sometimes we hear a plague on both your houses … over the past few decades, the politics of division and resentment and paranoia has unfortunately found a home in the Republican Party.”

This is an out-of-character moment for Obama. He has certainly levied harsh critiques against the Republican Party in the past, but he built his brand on rhetoric that transcended partisanship. Lamenting the “smallness of our politics” and that “Washington is broken” were characteristic Obama pronouncements — critiques of a system but not of any actors, certainly not the opposing party. It’s a posture he’s cultivated further in his post-presidency, during which he hasn’t played much of a role in the controversial debates and policy fights of the Trump era.

Like any vintage Obama speech, he did still call for common ground and bipartisan collaboration. But coming in the wake of what felt like an 18-month political hibernation — and with two months to go before crucial midterms — Obama’s lambasting of the Republican Party stood out. It’s a bracing analysis of how we got here, in an environment where critiques of Trump frequently stop with him and not the party enabling him. And it suggests a new turn for Obama, who has a habit of opting for post-partisan positioning when the partisan trench warfare is more what the moment calls for.

Obama tried to work with Republicans. He’s learned his lesson.

Liberals were frustrated for years with Obama’s ongoing attempts to negotiate with Republicans, to try to get even a single vote for his priorities. It never worked, but Obama kept trying.

He tried to find compromise on priorities ranging from health care to gun control to the future of the welfare state. He sought to have a bipartisan Cabinet (to mixed success). After Senate Republican leader Mitch McConnell declared in 2010 that “the single most important thing we want to achieve is for President Obama to be a one-term president,” he still kept trying.

Today’s Obama appears to have learned his lesson. He called the Republican Party beholden to wealthy interests:

None of this is conservative. I don’t mean to pretend I’m channeling Abraham Lincoln now, but that’s not what he had in mind, I think, when he helped form the Republican Party. It’s not conservative. It sure isn’t normal. It’s radical. It’s a vision that says the protection of our power and those who back us is all that matters even when it hurts the country.

It’s a vision that says the few who can afford high-priced lobbyists and unlimited campaign contributions set the agenda, and over the past two years, this vision is now nearing its logical conclusion. So with Republicans in control of Congress and the White House, without any checks or balances whatsoever, they’ve provided another $1.5 trillion in tax cuts to people like me — who I promise don’t need it — and don’t even pretend to pay for them.

Obama argues that the party is willing to make a Faustian bargain with Trump — let him do what he wants in exchange for signing Republican legislation — even though they know it’s dangerous. They could check him, but they don’t:

In a healthy democracy, there’s some checks and balances on this kind of behavior, this kind of inconsistency, but right now there’s nothing. Republicans who know better in Congress — and they’re there, they’re quoted saying, yeah, we know this is kind of crazy — are still bending over backward to shield this behavior from scrutiny or accountability or consequence, seem utterly unwilling to find the backbone to safeguard the institutions that make our democracy work.

It’s a sweeping condemnation of one of America’s two major parties. And it’s also, for reasons my colleague Ezra Klein has explained, correct: Republicans in Congress really do have the power to check Trump, to launch investigations into his most egregious scandals and block him from firing special counsel Robert Mueller and messing with core American international agreements. But they choose not to, for essentially the reasons Obama suggests in his speech.

Obama’s solution to the problem he outlines in the speech is clear enough: Democrats should win elections. But when he tries to give them advice on how to do that, his analysis begins to sound a little more familiar.

Consider the following passage, a veiled criticism of Hillary Clinton’s infamous “deplorables” comment. Obama argues that Democrats shouldn’t write off any Americans as irredeemable bigots, instead considering everyone a potentially persuadable voter:

We won’t win people over by calling them names or dismissing entire chunks of the country as racist or sexist or homophobic. When I say bring people together, I mean all of our people. This whole notion that has sprung up recently about Democrats needing to choose between trying to appeal to white working-class voters or voters of color and women and LGBT Americans, that’s nonsense. I don’t buy that. I got votes from every demographic. We won by reaching out to everybody and competing everywhere and by fighting for every vote.

There’s a part of this that feels like it’s ignoring reality. Political science research on the 2016 election suggests that Trump won because a huge chunk of voters responded positively to his racism and sexism. Voters who scored high on tests of racial resentment were unusually likely to support Trump, as were voters who scored high on measures of hostile sexism. These voters did not tend to be particularly stressed economically; this wasn’t displaced economic resentment. Rather, they seem to genuinely share the current president’s values, agreeing that the way to “Make America Great Again” is to slow or even roll back social change.

Many of these voters seem to have been motivated by Obama’s own victories. Research by UC Irvine political scientist Michael Tesler has found that over the course of Obama’s two terms, the country polarized significantly along racial lines — with Republicans in particular adopting more hostile views toward black people and civil rights. Race came to shape every issue — even people’s opinions on Obama’s dog Bo.

This would suggest that a Democratic Party that wants to be diverse and egalitarian can’t win over some of those voters and really shouldn’t try — because trying would mean betraying women, people of color, LGBTQ Americans, and the like. That’s the tension Obama was alluding to — but instead of grappling with it honestly, he decided to mostly pretend it didn’t exist.

This actually mars his analysis of GOP complicity in Trump’s rise, too. The problem isn’t just the institutional actors in the Republican Party — it’s the party’s supporters too. Gallup shows that 85 percent of Republican voters currently approve of Trump’s job performance, and that the number has been fairly consistent throughout his presidency. If we don’t confront the fact that a huge chunk of America’s voters truly are reactionary, we can’t honestly grapple with the crisis of the Republican Party.

But the fact that Obama’s analysis doesn’t go quite far enough shouldn’t distract from the main point here. A president who began his national political career by declaring that “there’s not a liberal America and a conservative America” but rather “a United States of America” is now blaming one party for breaking the government and dividing the country, for essentially selfish reasons. This speech was a searchlight, illuminating just how much American politics has changed over the past couple of decades.

Why art matters at the end of the world
Everything you need to know about the next Democratic debate
Aunt Jemima and the long-overdue rebrand of racist stereotypes
Trump gave congressional Republicans the deniability they crave
GLAAD: the number of LGBTQ series regulars on TV is at an all-time high
Harvard’s coronavirus response highlights how college closings are hurting low-income students