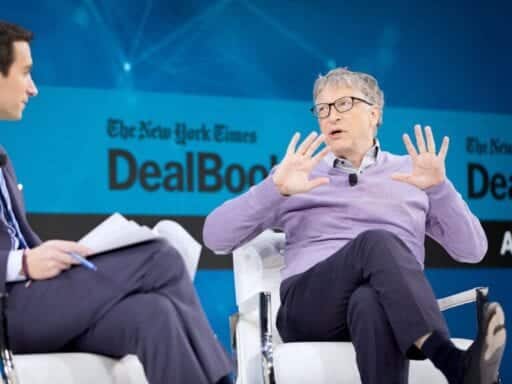 Most of the ultra-rich are right-wing and single-mindedly focused on lowering their taxes, and it’s a major social problem.

“I’ve paid over $10 billion in taxes. I’ve paid more than anyone in taxes. If I had to have paid $20 billion, it’s fine. But when you say I should pay $100 billion, then I’m starting to do a little math about what I have left over,” Gates said.

Gates was obviously — based on both his tone and the fact that he literally said the words “I’m just kidding” right after — just kidding. The point of his comments was that he supports dramatically higher taxes on people like himself. He even concluded his response to Sorkin’s question by saying that you could “go a long way” toward raising taxes on people like him before creating any problems with work incentives.

Here’s what Bill Gates had to say yesterday about Elizabeth Warren’s wealth tax, plus his thoughts on a potential Warren vs. Trump decision in 2020. #DealBook https://t.co/aYsCPUL3b7 pic.twitter.com/rWrIj8fSO8

His remarks were … not interpreted that way. When my colleague Teddy Schleifer tweeted Gates’s comment about the possibility of paying $100 billion, it got 4,000 retweets and 2,500 replies, mostly in outrage; Teddy’s follow-up making it clear Gates was kidding got only 145 retweets and 37 replies. Amid the blow-up, both Warren and Bernie Sanders (who has also proposed a wealth tax) took the opportunity to respond, Warren by assuring Gates that her tax wouldn’t cost him $100 billion and Bernie by speculating about what $100 billion could do if seized as revenue.

We could end homelessness and provide safe drinking water to everyone in this country.

Bill would still be a multibillionaire.

Our message: the billionaire class cannot have it all when so many have so little. https://t.co/fVlxuIGygf

The backlash got even worse when Gates demurred in response to a question about whether he’d vote for Warren or Trump in a general election, saying he’d favor the more “professional” candidate in the general election and adding with a meaningful glance to Sorkin, “I hope the more professional candidate is an electable candidate.”

I took this as a barely disguised statement that he’ll vote for the Democratic nominee because anyone the party could nominate would be more professional than Donald Trump. This interpretation is reinforced by his body language and the crowd’s laughter during the answer; he was just expressing a hope that Democrats nominate someone he considers electable. Gates has not to my knowledge ever publicly endorsed a candidate for office, keeping instead to endorsing specific ballot measures in Washington state, in part so as not to endanger his foundation’s collaborations with US foreign aid agencies and other groups. Given that constraint, this was a pretty strong hint.

Many Gates detractors, however, took it as evidence that he was somehow undecided in the election, or, as Anand Giridharadas put it, that Gates “mulls voting for a white nationalist” to avoid having his taxes increased.

This all seems rather silly to me. Gates’s presidential vote almost certainly won’t matter in Washington. Even if it did, the few times he’s ever intervened in politics, it has been to push for a price on carbon and higher taxes on the wealthy; more to the point, he has never spent on presidential elections before, and I doubt 2020 will be an exception.

But the misconstrual of Gates’s position isn’t just unfair; it’s actively counterproductive given how anomalous a figure he is. Most billionaires are more politically active and more politically right-wing than him, and far more likely to actually make the choice to back Trump so their taxes go down. Fixating on him lets the billionaires causing actual harm to the world off the hook.

Gates is the exception, not the rule

We (and I include myself in this) have a tendency to focus our discussions on billionaires on the ones who happen to have massive public profiles: Amazon CEO Jeff Bezos, Facebook CEO Mark Zuckerberg, and Gates, the founder of Microsoft. There’s also, to some degree, a desire to focus on Gates specifically because his philanthropic work, at least abroad, seems unusually effective; Gates can accurately claim that he has saved millions of lives by funding immunization campaigns, and could save millions more if the efforts he has funded to eradicate malaria pay off.

Giridharadas puts it well: We talk about Gates because he’s the hard case, and biting the bullet and saying, “No, not even he is worth celebrating,” effectively wins the whole argument:

This is a game-changing moment for this conversation. Because if we can’t even trust Bill Gates to put his desire for a better world above his self-preservational plute drive, then who on planet earth can we trust?

It’s a fair reaction, but I worry the media’s intense focus on edge cases like Gates risks, perversely, making billionaires look a lot better than they actually are.

Scroll through a list of the richest people in America, and pretty quickly you get out of the realm of Zuckerbergs, Bloombergs, Kochs, and other headline grabbers to folks you probably think about very rarely. There are three heirs to the Walmart fortune — Jim, Alice, and Rob Walton — bunched together with $44 billion each. There are the Mars candy heirs John and Jacqueline with $24 billion each. There are forgotten tech founders like Steve Ballmer; while you don’t see Dell computers around very much anymore, Michael Dell is still worth $34 billion. Then there are folks like Donald Bren, Thomas Peterffy, and Abigail Johnson, who rarely make headlines outside the business press at all.

Most of these folks are nothing like Bill Gates, or even maybe-presidential candidate Michael Bloomberg. If anything, they’re much likelier to be similar to the libertarian/right-leaning Kochs. Political scientists Benjamin Page, Jason Seawright, and Matthew Lacombe’s book Billionaires and Stealth Politics, published last year, examines the views of the 100 richest Americans, as suggested by their political contributions, giving to advocacy groups, bundling efforts, and (more rarely) public statements. Sixty-four percent of the billionaires they studied gave solely or primarily to Republicans or conservative groups; 13 percent of billionaires additionally donated to organizations advocating lower taxes, in most cases to organizations fighting for lower estate taxes.

“The Koch Brothers and Sheldon Adelson, while unusual in the enormous magnitude of their political spending, are much more typical than Gates, Buffett, or Bloomberg in not speaking out about public policy but quietly engaging in extensive political activity, most of which supports conservative causes and candidates,” they conclude. Indeed, Thomas Peterffy, who has one of the largest fortune-to-fame ratios of any billionaire, made a rare appearance in the public spotlight in 2012 by buying ads attacking the Obama administration’s “socialism” in major swing states.

Obviously, the people criticizing Gates also find fault in what the Kochs, Adelsons, and Peterffys are doing too. But the bias toward discussing billionaires like Gates nonetheless inadvertently lets the rest of the gang off the hook. It seems dramatically less productive to shout at a billionaire who is openly calling for higher estate taxes and capital gains taxes to shrink his own fortune than to target the bulk of billionaires with much more self-interested political projects in mind.

Why time feels so weird right now
Trump faces pressure from a federal judge to release detained migrant kids as coronavirus spreads
A new generation of Black progressives has been elected to Congress
No Time to Die tease looks like it will really be Daniel Craig’s last Bond
Exclusive: Nobel laureate Joseph Stiglitz on how to fix the economy during and after the pandemic
The 2020 Grammys kicked off with a Kobe Bryant tribute from Alicia Keys and Boyz II Men