Before Trump, churches were increasingly multiracial. What next? 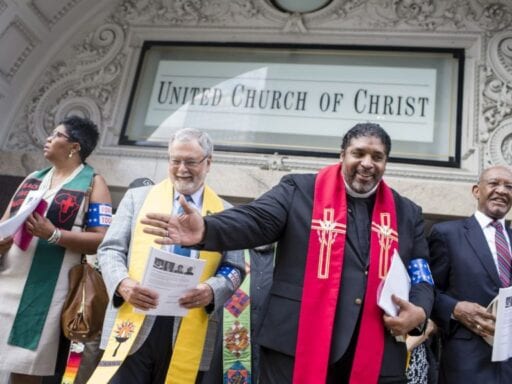 A new study shows that churches were becoming more diverse over the past two decades. Then Trump happened.

Martin Luther King Jr. famously said that the most segregated hour in America is 11 o’clock on a Sunday morning. Fifty-four years later, church affiliation across America — particularly in mainline and evangelical Protestant communities — remains racially and politically divided. But a recent study published in the Journal for the Scientific Study of Religion found that Christian churches are generally becoming increasingly multiracial.

Surveying congregation demographics between 1998 and 2012, the study found an increase in the number of multiracial congregations. In 1998, just 6.4 percent of Christian congregations overall were multiracial — defined as having no single ethnic group make up more than 80 percent of the community. By 2012, that figure doubled to 12 percent. In that timeframe, the portion of American churchgoers who attended multiracial churches went up from 12.7 percent to 18.3 percent.

Changes were particularly pronounced in evangelical churches, which have historically been racially segregated, and seems to have been spurred, at least in part, by the proliferation of evangelical megachurches.

While the study ends with 2012, the findings track with wider demographic changes in church communities. Trends within the evangelical community likewise have indicated an increasingly diverse, and increasingly multiracial, church in the years leading up to the 2016 election.

For example, in the Southern Baptist Convention — the single largest evangelical Protestant group — half of all new churches have nonwhite congregations. Many of these churches are predominantly Latino or black — and may not necessarily be multiracial congregations — but they nevertheless generally reflect more diversity in denominations overall in the first part of the 21st century.

The numbers reflect, in part, demographic change in America, particularly the increase in the Hispanic population. But they also reflect a wider, and conscious effort on the part of many churches to effect what was known as “racial reconciliation” in the late ’90s and 2000s. For example, in 1995, the Southern Baptist Convention publicly repented of its historical complicity with slave owners and passed a resolution for racial reconciliation. Similar resolutions were also passed that year by other evangelical churches such as the Evangelical Covenant church.

The attempts at resolution, though, may be reversing thanks to the contentious 2016 presidential election. We don’t yet have the data to ascertain exactly what the effect of the 2016 election will be on these numbers. However, anecdotal suggests that, for many Christians of color, Donald Trump’s election may have been a step back prompting some non-white evangelicals to leave multiracial or predominately-white congregations. A New York Times article from March suggests that evangelicals of color — discouraged by the 81 percent of white evangelicals who voted for Trump and the 75 percent who continue to support him as of April — are leaving their congregations.

If Trump’s presidency fragments multiracial congregations or denominations, he will be actively undoing a decade and a half’s worth of effort, and turning back the tide on racial reconciliation within Christian communities. Eleven o’clock on a Sunday morning may end up more segregated than ever.

10 Things I Hate About You is as fresh as ever, even 20 years later
Food halls are everywhere now. It’s because we crave “authenticity.”
Democrats took a risk by speaking Spanish during the debate
The rescue of the 12 Thai boys who were trapped in a cave, explained
Watch our new show Answered on Quibi
The scariest thing about global warming (and Covid-19)