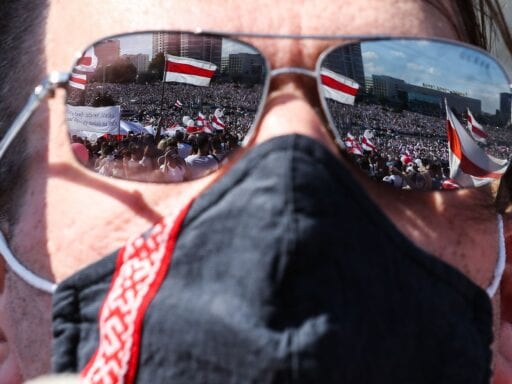 A man’s sunglasses reflect participants in a rally against the results of the country’s 2020 presidential election at the Minsk Hero City Obelisk in Minsk, Belarus, on August 16, 2020. | Natalia Fedosenko/TASS via Getty Images

Some observers say they may be the largest protests in the history of the former Soviet republic.

Tens of thousands of protestors demanding a new election gathered in Minsk, Belarus, and other cities around the country on Sunday in what some observers say may be the largest protests in the history of the former Soviet republic.

The demonstrations came a week after Belarusian President Alexander Lukashenko — Europe’s longest-serving leader — plainly rigged national elections to remain in power. And they marked the eighth day of protests across the country against those results, a striking burst of energy against a repressive government that has resulted in thousands of Belarusians being detained and at least two deaths.

The antigovernment protestors formed an immense crowd that was several times the size of a pro-government rally held nearby where Lukashenko delivered a speech, rejecting demands for new elections and falsely claiming that Belarus was being threatened by a NATO buildup of troops on its borders.

#Belarusprotests are unique in many ways: sustained, nonviolent, self-organized but also they take place not only in the capital, not only in #Minsk. The whole country raised up against #Lukaschenko. Here’s from today’s demonstration in Brest ⬇️
pic.twitter.com/CMEKzlZ3ZR

The Sunday protests were notable not only because of their size, but also because they appeared to be unusually free from crackdowns. The Times reports:

For the first time, Belarusians were allowed to walk freely in the city center, wrapped in opposition flags and chanting antigovernment slogans. After gathering near the obelisk, they walked toward the main square, blocking traffic on the capital’s main avenue. Only one week ago, a group of clapping people on a sidewalk would have been violently dispersed by the riot police. On Sunday, the police were nowhere to be seen.

As Vox’s Alex Ward has explained, public perception of Lukashenko in the run-up to last week’s election was at a low point because he had “minimized and mishandled his nation’s coronavirus outbreak, oversaw a collapsing economy, and struggled to keep an encroaching Russia at bay.”

Lukashenko intervened aggressively in the elections: he detained journalists and two of the top three opposition leaders running against him; he prohibited the third one from running altogether.

Lukashenko’s authoritarian handling of the election while the nation also faced serious economic and public health crises seems to have backfired, helping to ignite the protests.

Part of the dissident energy also seemed to be fueled by the meteoric rise of a 37-year-old stay-at-home-mom-turned-opposition leader named Svetlana Tikhanovskaya, who stepped into the race after her husband, a popular blogger, was arrested two days after he announced his candidacy for president. Tikhanovskaya has been forced to flee the country out of safety concerns, but protests have continued to gather momentum across the nation.

Demonstrators in Ukraine, the Czech Republic, and Russia protested in solidarity with Belarusians