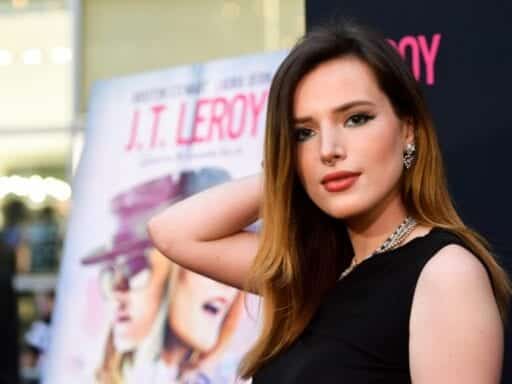 The latest chapter in the saga of why the internet is a terrible place for women involves two celebrities who seem unlikely to have ever been connected to one another: Bella Thorne and Whoopi Goldberg.

Thorne, 21, is an actress best known for her roles in Big Love and Disney Channel’s Shake It Up. On June 15, Thorne said on Twitter hackers had stolen her nude photos and tried to blackmail her — leading her to defiantly release the photos on her own.

Thorne’s actions gained national attention, including from such actress-turned-talk show co-hosts like Whoopi Goldberg, who took it upon herself to chastise Thorne on the June 17 episode of The View. Goldberg’s issue with Thorne wasn’t just her decision to release her own photos; she reprimanded her for taking nude photos of herself in the first place.

BELLA THORNE POSTS NUDE PICS TO THWART HACKER: Actress Bella Thorne said she took her “power back” by sharing nude photos of herself after blackmailers threatened to leak them – the co-hosts discuss if this was the right move. https://t.co/1091s9Fn2d pic.twitter.com/VqFXmggPle

“If you’re famous, I don’t care how old you are. You don’t take nude pictures of yourself,” Goldberg said during the episode. “Once you take that picture, it goes into the cloud and it’s available to any hacker who wants it, and if you don’t know that in 2019 that this is an issue, I’m sorry. You don’t get to do that.”

While Goldberg and Thorne’s exchange seems intimate, their fight is actually indicative of something that’s more than just personal. Thorne isn’t the first woman in the public eye to have her nude photos exposed without her consent; far from it. And Goldberg won’t be the last woman to shame another woman for taking said photos. But Thorne and Goldberg’s conflict really is a story about how the objectification and violation of women’s bodies has now become commonplace on the internet.

Bella Thorne had her consent and control over her sexuality violated

To fully understand Bella Thorne’s problem is to understand how rampant “revenge porn,” or and the targeting female celebrities has become. Actresses like Jennifer Lawrence and Blake Lively, singers like Ariana Grande, and models like Kate Upton have had their private nude photos leak — many during the infamous 4chan hack in 2014. 2017 saw egregious instances like Rob Kardashian posting nude photos of his ex Black Chyna on Instagram and a photographer taking an upskirt photo of actress Natalie Morales. And last month, rapper Iggy Azalea spoke out about how violated she felt when her topless photos, were released without her consent.

Thorne is the latest example in an all-too-familiar trend. Her hacking incident played out in much the same way as her peers’: Someone found their way into her digital photo storage. But what sets her story apart is that, according to Thorne, the person who stole her photos went to Thorne directly, in an attempt to blackmail her. In the previous cases, the images were just shared online without any prior contact with their owners.

“For the last 24 hours I have been threatened with my own nudes,” she wrote in a message posted on June 15. “I feel gross, I feel watched, I feel someone has taken something from me.”

In order to fight back against the threats, Thorne released the nude photos that her hacker was threatening her with. By releasing the photos, Thorne argued, her hacker wouldn’t have power over her — since everyone would have access to the photos, should they want to see them.

This move, while surprising, is not without precedent. In November 2017, singer Sia did the same thing under the same circumstances — a photographer was threatening the singer with a nude photo saying they would sell it to magazines. So Sia released the photo herself.

“I’m putting this out because it’s my decision,” Sia wrote. “Now u don’t get to take yet another thing from me. I can sleep tonight better knowing I took my power back.”

Thorne seems unashamed of expressing her sexuality, in the roles she plays onscreen, her art, and her personal life. And Thorne, the other women who have been hacked or had their nudes leaked — from Jennifer Lawrence to Iggy Azalea — and every other human on this planet has the unflinching right to express their sexuality on their own terms. Thorne’s hacker violated this, taking away her control over her own body. Through releasing the photos on her own, Thorne was able to take some of that control back into her own hands.

Whoopi Goldberg’s job on The View is to express her opinion. This past week, for example, she stood behind former Vice President Joe Biden over his comments about segregationist senators, and in the past, she’s defended Michael Jackson and Mel Gibson’s racism, and Michael Vick’s dog-fighting. How Goldberg factors into one’s personal moral compass depends on said person, and her defenses and castigations often vary in coherence and quality.

Her take on Thorne is one such questionable argument. In response to the nude photo incident, she blamed Thorne for what had happened, along with every female celebrity who had ever been in a similar situation. “If you’re famous, I don’t care how old you are. You don’t take nude pictures of yourself,” Goldberg said.

To Goldberg, a celebrity hack is to be expected. It’s better to be safe and not take nude photos than to be sorry and have them leak. But Goldberg’s advice is akin to telling someone carrying cash that it’s their fault for getting mugged. Or, as my former colleague Kelsey McKinney wrote for Vox in 2014, it’s akin to saying that a woman is “asking for it.” McKinney wrote:

“Don’t take nude selfies” falls into the same category as other victim-blaming arguments. Don’t wear a short skirt. Don’t have a drink at the bar. Don’t smile at cat-callers. Don’t have too much cleavage. Don’t ever, ever say that you want to have sex. Don’t possess your sexuality, society says, in any way, because then you deserve to have it taken from you.

It’s impossible to emphasize enough that the person hacking Thorne or Lawrence or Kate Upton’s photos is the real person at fault.

“So, whether it’s one picture or a million pictures, once you take that picture, it goes into the cloud, and it’s available to any hacker who wants it. If you don’t know that in 2019, that this is an issue … you don’t get to do that,” Goldberg also said in the segment.

“Dear Whoopi, I have loved u for so long but honestly I’m so displeased and saddened by your response to [Thorne’s leaked photos]. Blaming girls for taking photos in the first place? Is sick and honestly disgusting,” she wrote in an Instagram story on June 18. (Instagram stories expire and delete after 24 hours, so Thorne’s is no longer available).

Giving Goldberg the benefit of the doubt, and considering the way that The View is structured to encourage its hosts to say incendiary things, she does make some semblance of a reasonable point about privacy: It’s true that the apps, devices, data storage platforms we use have completely let us down time after time.

The notion that “any hacker who wants it” can easily access your private drives is appalling. Maybe what we should blame is the people we trust to store our data as much as the hackers, and the notion that our right to privacy is dead, should be debated and examined.

Perhaps Goldberg was, in a roundabout way, trying to make that point too.

But after hearing her response to Thorne’s hack, and the different permutations of it that pop up over and over when these leaks happen, whatever point Goldberg wanted to make about privacy is comparatively lost. Instead, our takeaway is that a young woman who is proud of her body has only herself to blame when that body is exposed without her consent. Thorne will not be the last woman whose nude photos appear online, and it’s exhausting having to remind people each time that those women aren’t at fault; they’re the victims.

The Ukraine scandal makes a stronger case for impeachment than the Mueller probe did
From Netflix Party to Zoom: The unlikely internet apps getting us through quarantine
Aircraft fuel is notoriously dirty. This airline is betting on clean electricity.
The fine print of Grubhub’s $100 million relief program for ailing restaurants
Greg Gianforte flips Montana governorship to Republicans
The Trump tax scandal is an indictment of the president — and the system