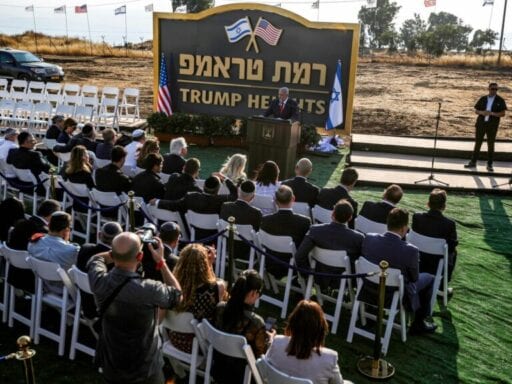 The town will be built in the contested Golan Heights.

Israeli Prime Minister Benjamin Netanyahu unveiled a plaque marking the location of the newest settlement in the Golan Heights on Sunday.

The marker proclaims the settlement will be known as “Trump Heights.” Netanyahu said the name was chosen to thank President Donald Trump for breaking decades of US tradition and recognizing the Golan Heights as part of Israel in March. Prior to that point, the US observed the international custom of considering it occupied territory.

Trump Heights, called “Ramat Trump” in Hebrew, is a symbol of the airtight alliance that’s developed between the US and Israel. Trump has repeatedly aligned himself with Netanyahu’s right-wing policy vision for his country and the Middle East.

The new town has yet to be built, but the ceremony marking the name and location of the settlement was conducted with much fanfare by the Israeli government. Netanyahu called it “a historic day” and praised Trump as a “friend of Israel.”

In a tweet, Trump thanked Netanyahu “and the State of Israel for this great honor.”

Thank you PM @Netanyahu and the State of Israel for this great honor! https://t.co/OUcf6s98UX

Why the Golan Heights matters so much to Israel

The Golan Heights is a strategically valuable swath of land that Israel annexed from Syria after 1967’s Six Day War. The United Nations and most of the international community do not recognize the territory as belonging to Israel. That’s because international law prevents countries from appropriating land by force, and also because recognizing the territory as Israel’s might be perceived as giving the country a green light to take over even more disputed territory in the region.

The US observed that norm until Trump made the controversial move in March to recognize Golan Heights as part of Israel — much to the joy of Netanyahu.

After 52 years it is time for the United States to fully recognize Israel’s Sovereignty over the Golan Heights, which is of critical strategic and security importance to the State of Israel and Regional Stability!

As Vox’s Alex Ward has explained, Trump likely went against precedent in hopes of helping Netanyahu win a political victory as he faced corruption charges and geared up for a tough election. It wasn’t the first time that Trump has made convention-shattering moves to align himself with Netanyahu.

In May 2018, the US opened up a new embassy in Jerusalem as a clear signal that it recognized the city as Israel’s capital. The move upended decades of US foreign policy that specifically avoided taking a stance on who the city belongs to since it’s such a pivotal component of the Israeli-Palestinian peace process.

The opening of the embassy helped fuel a surge in Palestinian protests along Israel’s border with Gaza and resulted in Israeli soldiers killing dozens of protesters and injuring thousands more.

Last month, Trump made the unprecedented move of attempting to intervene in the Israeli electoral process by publicly backing Netanyahu as he struggled to form a governing coalition.

Hoping things will work out with Israel’s coalition formation and Bibi and I can continue to make the alliance between America and Israel stronger than ever. A lot more to do!

It’s highly unusual for a country to endorse foreign leaders as they form governing coalitions, as they’re considered part of the electoral process of a country. In other words, it’s considered meddling.

Ultimately, though, Trump’s efforts didn’t seem to do the trick: Netanyahu failed to form a government, and Israelis will be voting again in September.

Netanyahu is likely drawing attention to Trump Heights in part because he thinks it’s politically advantageous to remind right-wing Israeli voters of his record of winning over the US on the status of the Golan Heights and the benefits that have been reaped from his strong relationship with Trump.

It might not win him the election, but it certainly won’t hurt his friendship with Trump.

Why a second round of Covid-19 lockdowns might not be as effective
In Sharp Objects’ “Closer,” women’s stories don’t belong to them
Sen. Kelly Loeffler has tested positive for the coronavirus
Federal appeals court rejects a Trump election lawsuit: “Calling an election unfair does not make it...
Trump’s social media executive order, explained
A new study shows that even the poorest immigrants lift themselves up within a generation