Bernie Sanders and the socialist ethic 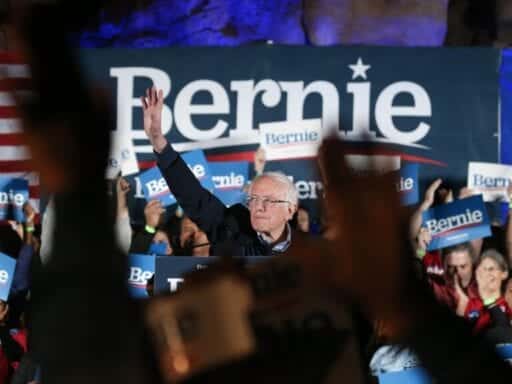 What it means for Democrats to nominate a Sanders-style socialist.

On Saturday, Sen. Bernie Sanders won the Nevada caucus, with ease. Before that, he won the New Hampshire primary, and before that, he won the most votes — though not the most delegates — in the Iowa caucuses. He is the favorite among Democrats in national polls, and heavily favored, at this point, to win the nomination. And so I have been hearing the same sentence, spoken in sharply different emotional registers, from thrilled young leftists, nervous moderate Democrats, gleeful Republicans: Democrats are about to nominate a socialist for president!

In 2015, I asked Sanders what being a socialist meant to him. “Democratic socialist,” he quickly corrected me. “What it means is that one takes a hard look at countries around the world who have successful records in fighting and implementing programs for the middle class and working families.”

When you do that, you automatically go to countries like Denmark, Finland, Norway, Sweden, and other countries that have had labor governments or social democratic governments. And what you find is that in virtually all of those countries, health care is a right of all people and their systems are far more cost-effective than ours, college education is virtually free in all of those countries, people retire with better benefits, wages that people receive are often higher, distribution of wealth and income is much fairer, their public education systems are generally stronger than ours.

This is Sanders’s standard answer, and it’s a good one: it makes his political program legible, concrete. He doesn’t want to turn America into the Soviet Union, he wants to turn us into Denmark. But it still, I think, leaves something important out — something key to understanding Sanders’s philosophy and appeal.

In his book Why You Should Be A Socialist, Nathan Robinson makes a distinction between the socialist ethic, which he defines as “anger at capitalism over its systematic destructiveness and injustice,” and socialist economics, which “rearranges the way goods are produced and distributed.”

During a conversation on my podcast — which is worth listening to in full if you want to understand how the rising generation of young leftists understands their movement — Robinson expanded on that distinction.

“There’s the great Eugene Debs quote,” he said, “which is, ‘While there is a lower class, I am in it. While there’s a criminal element, I am of it. And while there is a soul in prison, I am not free.’ And that’s not a description of worker ownership, right? That’s a description of looking at the world and feeling solidarity with people who are at the bottom with the underclass, with the imprisoned.”

Cutting the socialist ethic away from socialist economics is both frustrating and useful. It’s frustrating because it defines socialism in vague, expansive terms — a socialist, essentially, is someone who believes injustice is bad, equality is good, and solidarity is morally necessary. Lots of people who don’t define themselves as socialists believe those things to be true. But it’s useful in that it correctly describes Sanders’s ethic and appeal, and makes clear why he’s been able to build a coalition among people with no interest in a centrally planned economy.

What sets Sanders apart from many liberal Democrats isn’t his voting record or even his policy proposals. It is an animating belief that our political and economic system is unjust, and its successes do not remotely blunt its failures. In that same 2015 interview, I asked Sanders about the Democratic Party — which he was, then as now, running to lead — and his reply was unsparing:

The Democrats, to a much too great degree, are separated from working families. Are the Democrats 10 times, 100 times, better on all of the issues than the Republicans? They surely are, but I think it would be hard to imagine if you walked out of here or walked down the street or went a few miles away from here and you stopped somebody on the street and you said, “Do you think that the Democratic Party is the party of the American working class?” People would look at you and say, “What are you talking about?”

Sanders’s longtime insistence that he is a democratic socialist, not just a Democrat, is a way of holding himself apart from the political system. That includes the party he has worked with for 30 years, much as Donald Trump’s attacks on the GOP and his angry populism separated him from the Manhattanite billionaire class he actually represented.

The closest analogue to Sanders’s democratic socialism is the 2010 rise of Tea Party Republicans. Critics argued that the Tea Party was little more than a rebranding effort to rescue conservative Republicans from responsibility for the failures of governance, organizing, and messaging that afflicted actual Republican officeholders.

They were right, but they were right in a way that missed the power of their own insight: There were a lot of conservative Republicans who didn’t want to answer for the catastrophes of the Bush administration, who were disgusted by the compromises their supposed leaders had made. The Tea Party gave them a home. A few years later, Trump went even further and gave them a candidate.

Sanders’s critics inside the Democratic Party argue that he’s a liberal Democrat who has branded himself a socialist to maintain distance from the compromises, concessions, and coalitions the party has had to make to govern.

Their sense that Sanders is somehow playing unfairly is only compounded by the fact that Sanders, a reliable Democratic vote during his three decades in Congress, has supported many of those compromises, concessions, and coalitions, even as key members of his movement now treat them with contempt. These critics are right, but they are right in a way that misses the power of their own insight. There are lots of liberals tired of defending the compromises and concessions past Democrats have made.

In 2016, Molly Ball, now a national political correspondent for Time magazine, made a sharp observation on why Trump was beating the rest of the Republican field. “All the other candidates say ‘Americans are angry, and I understand,’” she wrote. “Trump says, ‘I’m angry.’”

Sanders, too, is angry. And that sets him apart. Democrats who believe in, and in some cases built, the political and economic system balance a celebration of its successes — think of former Vice President Joe Biden repeating the Obama administration’s accomplishments during each and every debate — with an ongoing recognition of its failures. They recognize that Americans are angry about those failures, and these Democrats understand that anger.

Sanders helped build parts of that political and economic system, too, but he doesn’t celebrate its successes. He lives in fury over its failures. “The more you learn about what life is actually like for people at the top and bottom, the more grotesque everything seems,” Robinson writes, in what could serve as a simple, one-sentence summation of Sanders’s worldview.

The difference between the socialist ethic and its absence isn’t the recognition of that moral fact — many agree with it abstractly — but the emphasis of it, the refusal to look away from it. Anger is the core of the socialist ethic. And Sanders is angry.

The cost and benefits of symbolic socialism

The term “socialist” remains unpopular. A Quinnipiac poll found that only 28 percent of Americans have a favorable view of socialists, and that number falls even further if you concentrate on older Americans. When older Americans hear the word socialist, they think of socialist economics — specifically, the planned, failed, economies of the 20th century, and the totalitarian nightmares they birthed — not the socialist ethic. A February Gallup poll found a majority of Americans say they wouldn’t vote for even a “well-qualified” socialist.

But Sanders continues to best Trump in head-to-head polls, and I suspect that’s because when voters look at him, what they see is his socialist ethic, not Soviet-style socialist economics.

When they hear him, they hear someone who wants universal health care, not totalitarianism. And when they look at his record, they see someone who has compromised with the system, but not been compromised by the system. There is a natural psychological tendency, when working inside a system, to defend your accomplishments in a way that slowly turns you into a defender of the system. That hasn’t happened to Sanders.

Perhaps, if he is elected president and has to disappoint his base by signing compromises into law and failing to fix some of the injustices he sees, it will. But that’s in the future.

For now, Sanders’s vulnerabilities lurk in the unpopular parts of his platform: tens of trillions in implied tax increases, abolishing 160 million private insurance plans by government fiat, decriminalizing unauthorized border crossing. His strength lies in his ability to be both inside and outside the political system at the same time, to understand how politics actually works, and what passing legislation actually requires, without losing his primal sense of identification with those the system has failed.

Here’s why it’s so hard to make a NAFTA deal
Women are running — and winning — in 2018
The sudden Democratic shift in favor of impeaching Trump, explained
The economic cost of major tech events canceled due to coronavirus has passed $1 billion
Awful online coronavirus hoaxes keep popping up
How to fight climate change at home