Bernie Sanders has an answer to the eternal question, ‘baby how u feelin’ 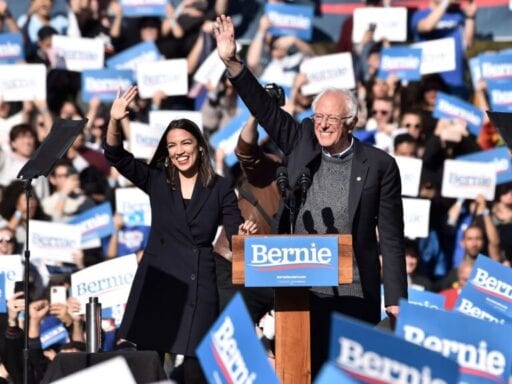 The senator from Vermont just got a bump from Ariana Grande.

A promotional tweet became a political sensation Friday; when Sen. Bernie Sanders responded to a tweet from pop star Ariana Grande, the chunk of the internet where feel-good pop music and left-wing politics intersect exploded.

Grande, who is featured on the remix of Lizzo’s “Good As Hell,” tweeted a line from that song Friday: “baby how u feelin.”

“Ready to fight for Medicare for All,” Sanders tweeted in response.

Ready to fight for Medicare for All. https://t.co/tltURZpb6a

Rep. Alexandria Ocasio-Cortez (D-NY), who recently endorsed Sanders’s candidacy for president, jumped into the conversation as well, promoting the progressive politics that she and Sanders are known for, like the Green New Deal, using some of Grande’s biggest hits.

God is a Woman: Strike the Hyde Amendment

Grande favorited both of these tweets, responding, “screaming” to the Vermont senator, and doubling down (“screaming screaming”) in her response to AOC.

Sanders hopes for new momentum after taking a break from campaigning

While Grande’s tweet is not the sort of full-throated endorsement that Sanders has won from other artists like Killer Mike and Cardi B, it is still a boon for the senator’s presidential ambitions, coming at a time at which he hopes to gain traction with voters.

He has not benefitted from the sort of increase in support enjoyed by his rival Sen. Elizabeth Warren, having seen his support remain around 16 percent for months, according to RealClearPolitics’ polling average. And he was briefly forced to take a break from earlier this month after suffering a heart attack.

Since his recovery, Sanders has staged an aggressive comeback campaign. “I am back,” he told a crowd of 25,000 people who turned out to an enormous rally in Queens, New York last week, at which Ocasio-Cortez — one of the Democratic Party’s rising stars — officially endorsed him.

Sanders has also gained the endorsement of Rep. Ilhan Omar (D-MN), and will be joined at a rally Sunday by Rep. Rashida Tlaib (D-MI) — both lawmakers are members of the group of young, progressive women in Congress often known as the Squad.

Other influential public figures are adding their support, too. Musician Jack White will join Tlaib at a Detroit rally in support of Sanders on Sunday, for example. Cardi B has joined Sanders on the campaign trail and filmed videos with him. Rapper T.I. also expressed his support for the candidate on The View on Friday, and rapper Kid Cudi has expressed support for Sanders’s plan to federally decriminalize marijuana.

As Chris Wade, producer of the progressive podcast Chapo Traphouse put it, Sanders “is collecting a killer festival lineup.”

Ariana, T.I. and Jack White endorsements all in one day, Bernie is collecting a killer festival lineup pic.twitter.com/1jonL9UcBx

The support of these figures could help Sanders appeal to newer, younger, and more diverse voters, who are increasingly drawn to progressive politics in general. And as Vox’s Sean Collins has reported, having backing from well-known progressive figures like the Squad could be critical for Sanders at this stage of the campaign:

Omar and Ocasio-Cortez could also be key in helping to boost Sanders, particularly if they act as his surrogates. Both are vocal members of their caucus who are seen as rising stars. Each — in part thanks to attacks against them by Trump and other Republicans — has high name recognition and large social media followings through which they are able to connect to and influence Democrats nationally.

The endorsements also help Sanders burnish his progressive bona fides and to further differentiate himself from fellow liberal candidate Warren, something he has sometimes struggled to do. He told ABC’s Meet the Press last week one key difference between the two is that “Elizabeth, I think, as you know, has said that she is a capitalist through her bones. I’m not.” With two of Democratic Party’s most famous progressives now in his camp, Sanders can offer further proof that he, not Warren, is the candidate who best typifies progressive ideas.

Unlike Cardi, Beyoncé, Kanye, or even Taylor Swift, who recently dipped her toe into electoral endorsements, Ariana Grande has not been notably outspoken on matters of public policy. Among a legion of fans of her music, however, she is hugely influential. In fact, Grande is the most followed woman on Instagram. If she began to feel the Bern, and post about the candidate in earnest, perhaps an untapped fan base could be motivated to turn out for a democratic socialist from Vermont.

How Cakes in Disguise Got Out of Hand
Norway wants to lead on climate change. But first it must face its legacy of oil and gas.
McDonald’s rolls out meatless Beyond burgers in Canada
A high school put books about police violence on a summer reading list. A police union wants them go...
The people running the world’s biggest companies have no idea what’s going to happen, either
“Fake milk”: why the dairy industry is boiling over plant-based milks