Bernie Sanders has declared victory in Iowa, without the final results 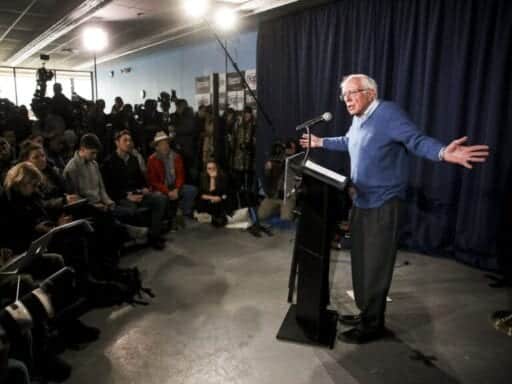 Sanders just declared a “strong victory” in Iowa, after the DNC called for a recanvass.

“We are now at a point with some 97 percent of the precincts reporting, where our campaign is winning the popular initial vote by some 6,000 votes,” Sanders told reporters in a Manchester field office. “In other words, some 6,000 more Iowans came out on caucus night to support our candidacy than the candidacy of anyone else. And when 6,000 more people come out for you in an election than your nearest opponent, we here in northern New England call that a victory.”

The Iowa caucuses have still not officially been called for any candidate, but the results show an extremely close race between Sanders and former South Bend, Indiana, Mayor Pete Buttigieg. Buttigieg declared victory on Monday night before any results were released, but has not spent much time touting a win since then on the trail in New Hampshire.

This is the first year the Iowa Democratic caucuses have reported popular vote tallies — making it the first time a candidate could make an argument like Sanders’s. With 97 percent of precincts reporting in caucuses after major delays, there is a razor-thin margin of 0.1 percent separating the top two candidates in the traditional metric the Iowa Democratic Party has reported in the past: “state delegate equivalents” (also known as SDEs), which determines how many delegates each candidate will get at the Iowa state convention.

“As it stands right now … either I or Mr. Buttigieg will end with a tiny fraction of an advantage in the SDEs. That may change, we may go in the lead by a little bit,” Sanders said. “Given the remaining precincts outstanding and mathematical errors which we are discovering in the data, we could well end up with more SDEs.”

Even though the number of SDEs had determined Iowa winners in the past — and is the metric the Iowa Democratic Party itself is prioritizing — Sanders argued that the race for national delegates and raw vote totals are a much bigger determinant of who won in 2020. He and Buttigieg are tied for their number of national delegates — 11 each, so far.

“But this difference — no matter who inches ahead in the end, is meaningless because we are both likely to receive the same number of national delegates to the Democratic National Convention in Milwaukee,” Sanders stressed. “Those national delegates, not the state delegates, are the ones that really matter in the nominating process.”

Iowa’s real importance isn’t delegates, however, it’s the momentum generated by winning here. The first-in-the-nation contest bestows momentum on a frontrunner or frontrunners. In declaring himself victorious and highlighting the popular vote tallies, Sanders is trying to capture the narrative and focus it squarely on himself.

As Sanders pointed out repeatedly on Thursday, he is leading in the popular vote in Iowa, both on the first and second realignment.

Sanders told reporters he had just minutes before learned of DNC Chair Tom Perez calling for a recanvass, but insisted it would not change the raw vote totals his campaign had received in Iowa. On the first alignment vote, Sanders received 42,672 votes compared to Buttigieg’s 36,718. On the second and final alignment vote, Sanders’s vote totals increased to 44,753 while Buttigieg went up to 42,235.

“We won an eight-person election by some 6,000 votes, that is not going to be changed,” Sanders said. “What may be changed in this so-called ‘recount’ is a few SDEs here.”

After Perez called for a recanvass on Thursday, Iowa Democratic Party Chairman Troy Price issued a statement saying recanvasses may be requested by individual candidates themselves, rather than the DNC.

“Should any presidential campaign in compliance with the Iowa Delegate Selection Plan request a recanvass, the IDP is prepared,” Price said. “In such a circumstance, the IDP will audit the paper records of report, as provided by the precinct chairs and signed by representatives of presidential campaigns.”

Sanders — along with other top candidates — seems eager to put Iowa behind him and move onto New Hampshire’s traditional secret-ballot primary on Tuesday, February 11, which officials here anticipate will proceed much more smoothly than the chaos of the Iowa caucuses. Sanders won the state in 2016 by 22 points, and many are watching to see whether he can replicate that with another win next week.

What a second Trump term could mean for LGBTQ people
America’s monopoly problem, explained by your internet bill
Why Iran won’t talk to Trump, explained in one paragraph
The case for prosecuting the Sacklers and other opioid executives
Fox News’s coronavirus coverage slid back off the rails spectacularly on Monday night
Democrats have been discussing the same ideas on guns for 25 years. It’s time to change that.