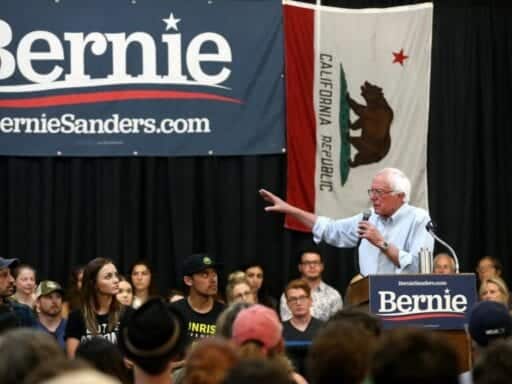 It’s a unique step for a Democrat who has been particularly outspoken in his criticism of the media.

Sen. Bernie Sanders (I-VT) is taking aim once again at Silicon Valley, this time laying some of the blame for the turbulence of the journalism industry at the feet of tech giants like Google and Facebook. And he’s promising as president to use regulation to hold them accountable.

On Monday, Sanders, who has accused “corporate” media of being biased against his campaign, offered what appears to be the first 2020 campaign platform for bolstering a media industry that’s been beleaguered by job cuts, ownership changes, and advertising shortfalls thanks to the rise of the Google-Facebook duopoly.

In a Columbia Journalism Review op-ed, Sanders writes that if he’s elected, his Justice Department would police those two behemoths with stronger antitrust enforcement, saying that Google and Facebook are “using their enormous market power to cannibalize, bilk, and defund news organizations.”

“Their monopoly power has particularly harmed small, independent news outlets that do not have the corporate infrastructure to fight back,” he wrote.

What Sanders does not offer is any way to sustainably shore up revenue shortfalls at legacy or digital media companies. Sanders cites stats that Facebook and Google control 60 percent of the digital ad market, but also parrots a widely criticized study that “Google made $4.7 billion off reporting that Google did not pay for.” (Here’s more on that flawed stat.)

Another novel idea that Sanders floated is taxing ads that are sold by Facebook and Google and using that money to support government-funded public broadcasting, like PBS. But the candidate says he wants to direct this money locally “to substantially increase funding for programs that support public media’s news-gathering operations at the local level.”

What should also draw the attention of Silicon Valley is Sanders’s declaration that he would institute an “immediate moratorium on approving mergers of major media corporations.” For instance, he opposes the attempted merger of CBS and Viacom, saying it would create a “$30 billion colossus.”

He also floated the idea that employees be given the opportunity to purchase media outlets through stock-ownership plans before their company is sold.

Sanders is walking a very fine line. Through telecom and tech policy, action from the White House can indeed impact the media industry. But presidential candidates — who are obviously not disinterested parties in media coverage — cannot be seen to be interfering with editorial independence. This is an especially acute concern for journalists at a time when the incumbent president speaks of strengthening libels laws and runs grievance campaigns against individual reporters.

Sanders himself has shown more willingness than any other Democratic candidate to go beyond the perennial griping about a bad story or two. The candidate — who has seen his support dip in national surveys in recent months — has alleged that the Washington Post, which is owned by Amazon CEO Jeff Bezos, is biased against him because of his criticism of Amazon (an unsubstantiated claim that he has since softened).

Operatives from Sanders campaign have spent an unusually large amount of time speaking about their frustrations with “corporate” media. In light of this, some Sanders critics have gone so far as to draw a comparison between Sanders and President Donald Trump.

Sanders has tried to cool the heat with efforts like an (eventually aborted) softball game between his staff and reporters. But this new plan — even if the details can be debated — does more to thoughtfully reckon with how the media industry can be strengthened, while simultaneously offering a chance to hit the political punching bag that is Big Tech.