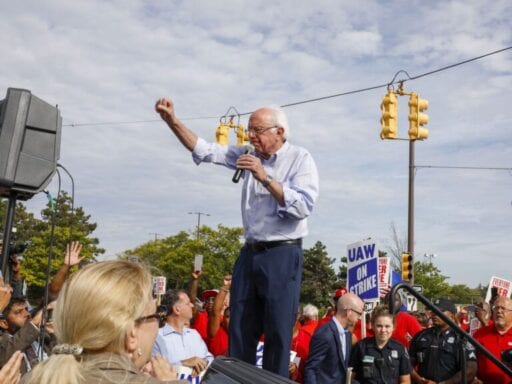 The average CEO of an S&P 500 company made 287 times more than their median employee last year, and Sen. Bernie Sanders wants to force them to change that — or pay for it.

Sanders’s presidential campaign unveiled its latest proposal to curb inequality in the United States Monday: An “Income Inequality Tax” on companies with massive pay disparities between the executive suite and the median worker.

“It’s a sin tax,” said Sarah Anderson, with the progressive think tank Institute for Policy Studies, who worked with Sanders’ team on the plan. “You are hoping to reduce harmful behavior. We see these gaps as harmful to society at large…but we think that it’s likely that some companies are so wedded to this idea that they have to pay their CEOs 100 times more than their workers —then they have to pay more in taxes.”

This idea isn’t new. Portland, Oregon has implemented a similar tax on a local level which fully went into effect last year. San Francisco plans to vote on a CEO tax measure next year, and similar proposals have been considered in Connecticut, Illinois, Massachusetts, Minnesota, and Rhode Island. Federally, Reps. Mark DeSaulnier (D-CA) and Bonnie Watson Coleman (D-NJ) introduced a bill proposing national CEO-to-worker pay ratio tax on publicly held companies in 2016. It has the backing of former Secretary of Labor Robert Reich, as well as several leading economists on income inequality, like Thomas Piketty.

Sanders’ team, however, is expanding on the idea, lowering the ratio companies would have to meet to avoid the tax, and extending it to both public and privately held companies with an annual revenue of more than $100 million. The campaign estimates the tax would raise $150 billion in revenue over 10 years, which Sanders wants to put toward his plan to eliminate $81 billion medical debt.

“It is time to send a message to corporate America: If you do not end your greed and corruption, we will end it for you,” Sanders said in a statement.

There’s a huge pay disparity between CEOs and workers

There are striking pay disparities between those in the C-suites of the biggest companies in the United States and the average workers.

An average American CEO at a S&P 500 company earned $14.5 million in 2018, the same year an average worker made $39,888. Over the last decade, CEOs’ average pay has increased by $5.2 million. In ten years, the average American worker’s pay hasn’t even increased by $10,000, according to the AFL-CIO labor federation’s analysis of the federal data.

A new IPS study found only five S&P 500 firms had CEO-to-worker pay ratios of less than 25 to 1. More shockingly, 49 of the 500 largest publicly traded firms have a median worker pay below the U.S. poverty line for a family of four. The median 2018 CEO pay at these 49 firms is $12.3 million.

Publicly held companies are required to file their CEO-to-worker pay ratios with the US Securities and Exchange Commission as part of the Dodd-Frank Wall Street Reform and Consumer Protection Act of 2010.

These filings showed Walmart paid its CEO 1,076 times more than the median Walmart worker last year — $23.6 million to $21,952. Jeff Bezos gets paid 58 times the median Amazon worker. The CEO of the Gap makes a staggering 3,566 times what the clothing retailer’s median worker makes. These are the companies that would get hit by Sanders’s Income Inequality Tax. His plan would direct the Treasury to collect CEO-to-worker pay ratio data from privately held companies — and make it public — and also issue regulations around tax avoidance.

Proponents of such a tax argue that either companies will pay a fairer share in corporate taxes, or be forced to address their internal pay disparities, reallocating executives’ pay toward rank-and-file workers. So far, in the one jurisdiction that has implemented such a tax — Portland, Oregon — it’s not clear the policy has had much of an impact on executives’ pay. But it has raised a fair bit of revenue.

Critics, like the typically more conservative Chamber of Commerce, have been vocal in their opposition to similar plans, arguing that they would push companies to cut lower-wage jobs, send jobs overseas, or replace workers with contractors. It should be noted that SEC rules requires companies to account for offshore employees in their calculation of median pay.

And as Anderson and Sam Pizzigati, also with Institute for Policy Studies, pointed out, you “gotta wonder who’d still be around to keep shelves stocked and tables clean, especially since most big companies have already outsourced as many jobs as makes corporate bottom-line sense,” if companies were to let go of lower-waged workers to avoid the tax.

This kind of tax has been implemented on a local level

This kind of tax has been implemented on the local level with success.

Portland, Oregon has become the case study for cities and states around the country looking to address pay disparities at their biggest companies. Implemented fully in 2018, companies in Portland have to pay 10 percent more toward their business license tax if their CEOs make more than 100 times the median pay of employees. Companies that pay executives 250 times more than the median worker have to pay a 25 percent additional tax.

The city expects to raise $3.5 million with this tax.

In 2016, Thomas Piketty, an economist who tracks inequality in the United States, told the New York Times that the Portland tax could have been even more aggressive.

Corporations and America’s wealthiest have seen a massive windfall under the Trump administration, which enacted massive corporate tax cuts — from 35 percent to just 21 percent — and reduced the top marginal tax rate. Since Republicans passed their tax cuts, corporations have spent billions buying back their own stock, and giving the riches to shareholders and investors, rather than workers.

“This is certainly part of the solution,” Piketty told the Times of Portland’s plan then, “but the tax surcharge needs to be large enough; the threshold ‘100 times’ should be substantially lowered.”

Sanders clearly agrees — his proposal cuts the threshold in half.

Why some people don’t tip their Uber drivers
Brexit talks enter the final stage — maybe
Black voters exist in the Midwest. Democrats, ignore us at your peril.
Betsy DeVos’s reported guns-in-schools plan would make schools less safe
Chief Justice Roberts could be an unexpected savior of public education in a religious schools case
Trump is getting free advertising for his golf course out of his UK trip