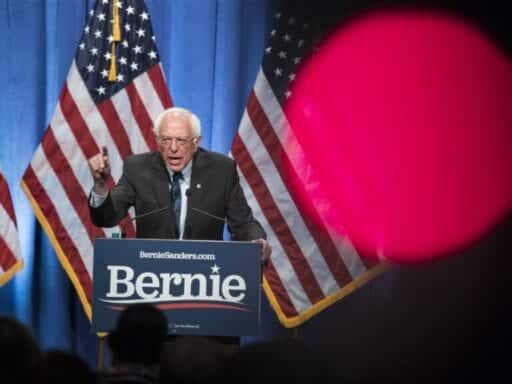 Donald Trump is now at the center of Bernie Sanders’s definition of democratic socialism.

Bernie Sanders sees the need to repeat himself.

Four months into his second presidential campaign, Sanders took the stage at George Washington University to make his clearest case for democratic socialism. It was a case he made in 2015, too, at a speech down the road at Georgetown University, but it appears the moment has caught up to his argument.

“If there was ever a moment when we needed a new vision to bring our people together in the fight for justice, decency, and human dignity, this is that time,” the Vermont senator said Wednesday. “Today in the second decade of the 21st century, we must take up the unfinished business of the New Deal and carry it to completion. … We must recognize that in the 21st century, in the wealthiest country in the history of the world, economic rights are human rights. That is what I mean by democratic socialism.”

There was one marked difference between Sanders’s two speeches on the subject: Donald Trump is now president. Sanders hasn’t changed his vision for America. But the world around him has. He’s not just fighting the corporatist wing of the Democratic Party he was in 2016, he’s also fighting what he sees as a global rise in authoritarianism, one embodied by Trump in the United States. Suddenly, the issues he once strained to fit in his narrative — from social injustice to foreign policy — are on his home turf.

“[Authoritarian leaders] redirect popular anger about inequality and declining economic conditions into violent rage against minorities — whether they are immigrants, racial minorities, religious minorities or the LGBT community,” Sanders said. “And to suppress dissent, they are cracking down on democracy and human rights.”

The speech is a major moment in American political history; a democratic socialist is one of the leading candidates in the 2020 Democratic presidential primary.

But it felt familiar. Three-and-a-half years ago, Sanders’s speech also invoked Franklin Delano Roosevelt. He made the same call for an economic bill of rights: for health care, affordable housing, racial equality, a clean environment, and a living wage. Sanders may have a newfound status as a frontrunner, but a democratic socialist in America still has to define their vision in terms that Americans can understand — and can fit into a fiercely capitalistic society.

Three years ago, Sanders won 43 percent of the Democratic primary electorate, losing the nomination. This time Sanders is in a crowded and diverse field of more than 20 Democratic candidates, polling behind former Vice President Joe Biden, and in one recent poll behind Sen. Elizabeth Warren (D-MA). Sanders isn’t changing his message to play in this field. He’s just raising the stakes.

Bernie Sanders’s agenda has been normalized in Democratic politics

A lot has changed since Sanders’s first presidential run. The rallying cries that distinguished him from Clinton in 2016 — Medicare-for-all, a $15 minimum wage, campaign finance reform, free college — are no longer unique positions.

In 2016, Sanders said he would start a “political revolution.” As I wrote at the launch of Sanders’s 2020 campaign, it’s hard to overstate the influence his first presidential campaign — which railed against corporate greed, economic inequality, and money’s influence in politics — has had on Democratic politics today.

The same day as Sanders’s speech at George Washington University, the Democrat-run House held a hearing on Medicare-for-all and public health care systems, the leading vision for health care among Democratic voters. Even the more moderate 2020 candidates, like Sen. Michael Bennet (D-CO), are running on some kind of public option.

The House is also advancing a bill to raise the minimum wage to $15 an hour, something Clinton and Sanders disagreed on in 2016. The “millionaires and billionaires” that Sanders rails against in every stump speech are now the target of almost every leading progressive economic policy proposal on the 2020 campaign trail. That’s not to say any of these ideas have become politically easier to pass and become law. But they’re part of the discourse in a way that wasn’t true before his 2016 run. Biden might be the leading the polls with a centrist agenda, but combined, the candidates running on progressive platforms mirroring Sanders’s have more support.

The polling around “socialism” and “capitalism” is also reflective of how far the country has shifted in attitudes on the ideologies over the past seven decades. A May 2019 Gallup poll found that 43 percent of Americans see socialism as a good thing for the United States, an 18 percent increase from the early 1940s. Of course, socialism is much more popular among Democrats than Republicans, and more among young people than older Americans. This makes sense, as young people made up a large part of Sanders’s base in 2016.

Sanders says his agenda defines democratic socialism. That’s what he said in 2015, and continues to say now. He calls for present-day New Deal politics that creates economic rights, from health care and affordable housing to a living wage and clean environment. And he’s quick to point out that Americans don’t see those ideas as radical as they once did.

Sanders is raising the stakes

Sanders has been both lauded and criticized for a certain redundancy in his messaging. On one hand, it’s not hard to figure out what Sanders is about. On the other, his critics have questioned how he will expand his base if he keeps saying the same thing.

The Sanders campaign knows the math. The senator’s in a crowded field, which will fracture the electorate; he likely won’t need to secure more than half the Democratic base to win the nomination — a campaign adviser was explicit about that in an interview with Vox. That said, Sanders will still need to exceed the roughly 15 to 20 percent he’s been polling at.

In the last presidential cycle, it was toward the end of the primaries (possibly seeing repeated losses with Southern black voters) that Sanders started speaking more in terms recognizable to different constituencies and communities. He’s continued that, citing racism, sexism, and other structural inequalities in American society in his speech Wednesday and on the campaign trail.

“And let me be absolutely clear: democratic socialism to me requires achieving political and economic freedom in every community,” Sanders said Wednesday.

If anything, he’s raising the stakes; Trump is president.

“When Trump screams socialism, all of his hypocrisy will not be lost on the American people,” Sanders said. “Americans will know that he is attacking all that we take for granted: from Social Security to Medicare to veterans health care to roads and bridges to public schools to national parks to clean water and clean air.”

Vox Sentences: Disarray down under
Tom Coburn, the Senate’s “Dr. No,” has died at 72
Colin Powell says he’s voting for Biden. Other top Republicans may soon follow.
One Good Thing: FX’s A Teacher depicts a teacher and student’s affair with pain intact
If our governments won’t stop climate change, should we revolt? Extinction Rebellion says yes.
Social Security, food stamps, and other programs kept 44 million people out of poverty last year