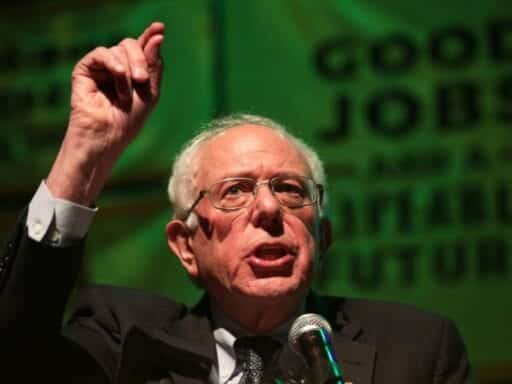 The Vermont Senator has finally put out his own plan to fight climate change. It’s big.

Sen. Bernie Sanders was the first of the 2020 Democratic presidential contenders to back the Green New Deal, a resolution put together by Congress’s most progressive lawmakers, outlining goals and principles for the US fight against climate change.

But the resolution, unveiled in February, was sparse on details, and Sanders didn’t fill in the blanks at the time. Since then, other presidential candidates have issued their own climate change proposals, some more ambitious than others. Washington Gov. Jay Inslee, even made climate change the centerpiece of his now-ended 2020 campaign, having released a six-part set of policies to tackle warming.

On Thursday, Sanders finally responded with his own agenda to fight climate change. It’s his longest policy proposal yet, and in true Sanders form, it calls for the largest government outlay of any of the climate plans out there, commits to a massive surge in union jobs, and it picks a fight with the fossil fuel industry.

The release of the plan coincides with Sanders’s visit to Paradise, California, a town of 26,000 people that was almost completely destroyed by the Camp Fire, the deadliest and most destructive wildfire in the history of the state. The blaze followed years of drought and a massive tree die-off fueled in part by rising average temperatures.

For the most part, Democrats agree that climate change is a major concern and that the United States needs to zero out its greenhouse gas emissions by the middle of the century. Now after two rounds of debates with almost two dozen candidates, Sanders is trying to distinguish himself not only by proposing spending more on fighting climate change than any other candidate has, but by anchoring himself as the most ferocious opponent of the fossil fuel industry.

The Intergovernmental Panel on Climate Change last year reported that if countries want to limit global warming to 1.5 degrees Celsius this century, they need to halve global emissions by 2030, become carbon-neutral by 2050, and then go carbon-negative thereafter.

Most of the other presidential contenders have set 2050 as their goalpost for carbon neutrality. But Sanders’s plan also calls for an intermediate goal of decarbonizing transportation and power generation, the two largest sources of emissions in the United States, by 2030, which would lower US emissions by 71 percent. The plan also calls for the US to help developing countries curb their emissions 36 percent by 2030.

Let’s be clear: 2030 is not that far away. Once inaugurated, a Sanders administration would have less than 10 years to hit this target. Right now, fossil fuel consumption is still rising in electricity production and in cars, trucks, aircraft, and shipping. And Sanders has ruled out increasing reliance on natural gas and nuclear power to curb emissions.

Nonetheless, the campaign thinks it can hit its 2030 target. “The New Deal provided inexpensive electricity to America through efforts like the Rural Electrification Administration and the Federal Power Marketing Administrations,” the proposal reads. “If the federal government was able to electrify America under FDR without computers or any of the modern technologies we have available to us today, think of what we can do today.”

It’s a lot of money, but Sanders says it’s paid for

Democratic presidential contenders all agree that the federal government needs to invest far more in clean energy research, development, and deployment, as well as in building community resilience against climate-linked disasters like extreme weather, rising seas, and wildfires.

Several 2020 Democrats have called for investment in the trillions of dollars, but in the fine print, these plans include public and private funding. Sanders’ plan is notably different because it calls more more money than any of the other candidates — $16.3 trillion in total — and the entire investment budget would come from federal dollars.

The plan generates money from various sources, including $6.4 trillion in revenue from selling energy via power marketing authorities, $2.3 trillion from income taxes from the new jobs created under the plan, and $1.2 trillion from reducing military expenses related to protecting oil shipping routes.

That money would then be spent across many different clean energy and climate adaptation programs:

The proposal aims to pay for itself over 15 years. And according to Sanders, the price tag is a bargain compared to the business-as-usual climate trajectory. “Economists estimate that if we do not take action, we will lose $34.5 trillion in economic activity by the end of the century,” according to the plan.

As we saw in the last Democratic presidential debate, contenders are increasingly willing to name the fossil fuel industry as the adversary. It’s a big change from when President Obama bragged about the massive growth of hydraulic fracturing for oil and gas on his watch and boasted about low gasoline prices during a State of the Union address.

But even among the contenders willing to call out coal, oil, and natural gas producers, Sanders has staked out the most aggressive position: he would direct his Department of Justice to pursue criminal prosecution of fossil fuel companies.

“They have evaded taxes, desecrated tribal lands, exploited workers and poisoned communities,” his proposal reads. “President Bernie Sanders will ensure that his Department of Justice and Securities and Exchange Commission investigate these companies and bring suits — both criminal and civil — for any wrongdoing, just as the federal government did with the tobacco industry in the 1980s.”

This is in addition to Sanders’s calls for civil litigation, increasing pollution penalties, raising taxes on emitters, and requiring fossil fuel producers to pay for disaster risk bonds.

While picking a fight with coal, oil, and natural gas may fire up his base, it sets up Sanders for a collision with a wealthy and powerful foe. Fossil fuel producers have a massive network of think tanks, lobbyists, and lawyers that have long thwarted climate change ambitions, and with their very existence at stake, they are likely to fight back harder than ever with lawsuits, messaging campaigns, and political pressure.

Sanders boldly claims his Green New Deal will “end unemployment” based on the sheer number of workers it will require; the campaign says their plan would create 20 million jobs. Currently roughly 6 million Americans are unemployed.

These jobs are closely tied to creating the green infrastructure required to reach 100 percent renewable energy for electricity and transportation and fully decarbonize. The plan lists jobs in:

The plan calls for a new version of the the Civilian Conservation Corps, a Franklin D. Roosevelt-era public works program that put young unemployed men in the Great Depression to work doing forest management, flood control, conservation projects, and the development of state and national parks, forests, and historic sites.

It also allocates $1.3 trillion for workers currently in the fossil fuel and carbon intensive industries to find work with strong benefits an a living wage.

While there’s plenty of research to show investments in infrastructure would certainly boost the economy and increase jobs — especially an investment as large as Sanders is proposing — the actual long term impacts of the levels of labor demand are harder to project, according to a 2014 study from the left-leaning Economic Policy Institute.

And jobs promises with green economy proposals often come up against barriers when it comes to the make up of the workforce. A 2019 Brookings Institute study found the clean energy economy workforce is currently “older, dominated by male workers, and lacks racial diversity when compared to all occupations nationally.”

The Sanders plan looks to address this by targeting job training and local hiring, and through investments aimed specifically at underrepresented groups — like supporting women-owned businesses, women farmers, as well as low-income and disadvantaged communities.

A movement of climate activists wants the world to respond to the growing wave of extreme weather and climate disasters the way they would to another Great Depression or even war — like it’s an emergency. They have an ally in Sanders.

In July, Sanders and Reps. Alexandria Ocasio-Cortez (D-NY) and Earl Blumenauer (D-OR) introduced a joint resolution calling for the US to join 16 other countries and hundreds of local governments in declaring a “climate emergency.”

His Green New Deal plan reiterates this call, saying the scale of the problem requires the “mobilization of resources made during the New Deal and WWII.”

This push to radically reframe how Americans approach climate change is largely based in political gridlock. Climate policy has become a zero-sum game in Washington, where Republican leaders have made it their political platform to block any climate policy, incremental or bold.

Here’s the only way any of this works: You develop a vision of politics that puts ordinary people at the center and gives them a tangible stake in the country’s future, a share in its enormous wealth, and a role to play in its greater purpose. Then organize people around that vision and demand it from elected representatives. If elected representatives don’t push for it, make sure they get primaried or defeated. If you want bipartisanship, get it because politicians in purple districts and states are scared to cross you, not because you led them to the sweet light of reason.

Sanders is certainly not the first to use the the language of national emergencies around climate. But this plan fits comfortably within his push for a political revolution to combat everything from the health care industry to the fossil fuel industry.

The surprising strategy behind the Gates Foundation’s success
The sordid history of housing discrimination in America
One of Peter Thiel’s venture capital firms has devolved into legal chaos
“The woman in Michigan”: How Gretchen Whitmer became a target of rightwing hate
Biden’s competitors want an apology for his boasting about “civility” with segregationists
The best $20 I ever spent: My first tote bag