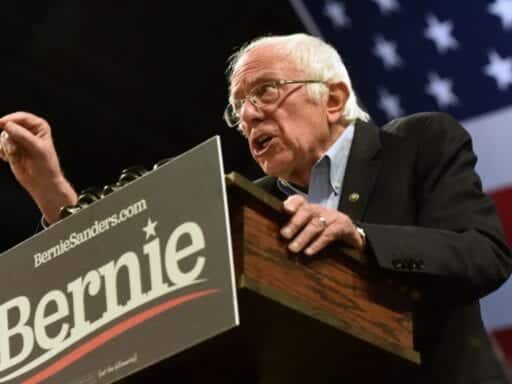 He’s making the argument that his ideas on labor and immigration are compatible.

Bernie Sanders’s immigration platform, released Thursday, is a classic Bernie Sanders plan: a policy agenda that reflects demands from activists on the left while still framing immigration as part of his signature issue of workers’ rights.

Sanders’s progressive bona fides on immigration have been questioned in the past.

In the 2016 presidential election, Hillary Clinton criticized the senator for voting against comprehensive immigration reform in 2007 — a bill that would have opened a pathway to citizenship for 12 million undocumented immigrants while investing in border security. (Sanders, who has long supported a pathway to citizenship, says he voted against the bill because of the lack of labor protections in the bill’s guest worker provisions.)

He has also repeatedly warned against “open borders,” which he calls a “Koch brothers proposal,” arguing it would depress wages for American workers.

“If you open the borders, my God, there’s a lot of poverty in this world, and you’re going to have people from all over the world,” Sanders said at an April town hall in Iowa. “And I don’t think that’s something that we can do at this point. Can’t do it.”

Sanders’s long track record defending labor interests has seemingly sometimes stood in opposition to his otherwise pro-immigrant rhetoric. His policy platform is an attempt to reconcile the two: a worker-centric immigration agenda that bolsters immigrants’ labor rights and offers them a part of the social safety net through programs like Medicare-for-all.

The most sweeping part of the plan: a proposal to use executive action to protect unauthorized immigrants who have lived in the US for more than five years from deportation, which, according to the Pew Research Center’s estimate, would cover almost 9 million people — more than any other legalization plan in the field.

Sanders would use executive action liberally

Sanders’s plan, like those of the rest of the Democratic field, relies on sweeping executive actions to scale back Trump’s immigration enforcement regime.

If Democrats win the White House and Republicans keep the Senate in 2020, the long congressional impasse on comprehensive immigration reform will probably continue. Congress has had some recent movement on bipartisan bills tackling smaller slices of the legal immigration system; one measure would amend per-country caps on green cards, but it has yet to pass the Senate.

That means any change to immigration policy will likely come from the president.

In addition to protecting millions of unauthorized immigrants from deportation through legislative action, Sanders’s plan calls for reversing several unpopular Trump administration policies, including the travel ban that continues to block individuals from seven countries from entering the US. It would also reverse policies targeting asylum seekers, such as the “Remain in Mexico” policy under which migrants have been sent back to Mexico to await decisions on their immigration cases.

Like other candidates, Sanders proposes raising the number of refugees the US admits annually. Unlike other candidates, he does not specify a number. Trump had lowered the cap on refugee admissions to a record low of 18,000 this year. Sen. Cory Booker and former US housing secretary Julián Castro have proposed reverting to the pre-Trump refugee cap of 110,000, but Sen. Elizabeth Warren would go even further, setting the cap at 125,000 initially and increasing it to 175,000 by the end of her first term.

And Sanders calls for ending immigration detention for all but a few immigrants with records of violent crimes or in other specific circumstances. (Under the Obama administration, however, it proved difficult to determine uniformly what constituted a serious crime that would merit detention.)

He would also restore programs that have historically offered legal protection to hundreds of thousands of immigrants that Trump has tried to terminate, including Temporary Protected Status, which the US has conferred on citizens of countries that have suffered from catastrophic events such as natural disasters or armed conflict, and Deferred Action for Childhood Arrivals, which has allowed almost 800,000 unauthorized immigrants who arrived as children to live and work in the US legally.

Candidates have mostly focused on immigrants’ civil rights and Trump’s agenda, rather than the economic role immigration can play.

But Sanders, whose campaign has centered on curbing income inequality and empowering workers, gives particular attention to immigrants’ labor rights.

Sanders claims that unauthorized immigrants are particularly vulnerable to abuses at the hands of employers because they might fear retaliation that could put them at risk for deportation. He consequently suggests redirecting funding from enforcing immigration laws against workers to holding their employers accountable for labor law violations. (The plan does not mention whether that will include preventing employers from hiring unauthorized workers in the first place.)

That message has taken on new urgency in light of Trump administration immigration raids targeting unauthorized workers over the past year. In one raid in August, 680 workers were arrested at two Mississippi poultry plants.

He suggests offering immigrant workers whistleblower protections if they speak up about workplace abuses and improving labor standards for farmworkers, domestic workers, gig economy workers and those employed in other underregulated industries. He would also allow them to participate in Medicare-for-all and College for All, his bill to make public colleges and universities tuition- and debt-free.

Though application backlogs have piled up under Trump, driving up wait times for visas and green cards, some of the issues with the current system predate his administration. Sanders proposes to provide more funding to US Citizenship and Immigration Services and naturalization programs, as well as overhauling the visa system for workers and their families.

Democrats have an easy unifying message on immigration: They’re anti-Trump

In some ways, Trump has made it easy for Democrats to display a unified front on immigration: They all think some kind of “comprehensive immigration reform” is necessary. Candidates’ first priority is to stop Trump’s immigration agenda, which has left roughly 11 million undocumented immigrants, living under the fear of deportation, 3.6 million of whom were brought to the United States as children.

Legalizing all unauthorized immigrants, not just those who entered the US at a young age, was once considered a “third rail” in Democratic politics; Republicans decried it as amnesty, and even moderate Democrats worried it would send the wrong message to people living unlawfully in the United States.

Now it’s uncontroversial: Public opinion shows that conservatives are losing the argument about a path to citizenship. Every candidate supports a path to citizenship for the people currently living in the United States without papers — not just those who came in as children.

In Congress, House Democrats have rallied around the Dream and Promise Act, a pathway to citizenship for unauthorized immigrants who came to the US as children and those with temporary humanitarian protections.

On the campaign trail, Sanders’s plan is joining a debate that has moved even further left. Castro, the only Latino candidate in the Democratic primary, was first to propose a radical reshaping of immigration enforcement by calling to repeal the provision that makes “illegal entry” into the US a federal crime. (Others, including Sanders, Warren, and Sen. Kamala Harris, followed suit.) The law has been on the books for decades but was rarely enforced until the George W. Bush administration, when criminal prosecution of unauthorized immigrants for illegal entry became increasingly common.

Sanders, Castro, and Harris have publicly said they would in their first 100 days in office pursue legislation to provide a path to citizenship for the 11 million unauthorized immigrants currently living in the United States.

New dividing lines are emerging in the party, particularly on border security and deportation. No Democrat actually supports an “open borders” policy, no matter what Trump claims; Sanders himself has made that clear. But so far, the candidates mostly haven’t gotten into details about who should be deported and who should be allowed into the US.

Former Vice President Joe Biden, South Bend, Indiana, Mayor Pete Buttigieg, and Harris have yet to release formal, comprehensive immigration plans, suggesting that some candidates are more willing to speak in generalities on the subject rather than specifics.

The gleeful maximalism of fashion legend Bill Cunningham, explained in 8 hats
Louise Glück just won the Nobel for literature. This poem will introduce you to her work.
Canned cranberry sauce, explained
Senate Republicans have already made up their minds on impeachment
Trump supporters storm the US Capitol: News and updates
“Definitely not”: Iran’s foreign ministry rejects the possibility of a meeting with Trump