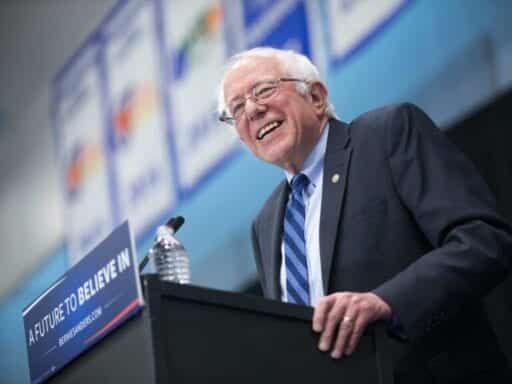 Sen. Bernie Sanders’s proposal to make college free in the United States just got bigger: He wants to erase all student debt, too. All $1.6 trillion of it.

The Vermont senator will unveil the most ambitious higher education plan in the Democratic 2020 presidential primary so far on Monday. The proposal would make two- and four-year public and tribal colleges and universities tuition-free and debt-free, and erase the roughly $1.6 trillion in student loan debt currently owed in the US, paid for by a tax on Wall Street.

Currently, about 45 million Americans have student loans. This would cancel debt for all of them — regardless of their income or assets. That’s a notable difference from Sen. Elizabeth Warren’s free college proposal, which also provides broad debt relief but caps it for households with incomes over $250,000.

Sanders is proposing funding streams to states, tribes, and historically black colleges and universities (HBCUs) to allow them to eliminate undergraduate tuition and fees. The bill would also increase spending on work-study programs, and build up federal grant programs for low-income students for additional costs related to getting an education — from housing and transportation to buying books.

The proposal would cost $2.2 trillion over 10 years, which Sanders says would be paid for with his Wall Street tax. Sanders proposed a Wall Street speculation tax in 2016, which would raise small levies on buying and selling stocks, bonds, and derivatives. It’s a proposal that many experts estimate could raise hundreds of billions of dollars annually. Sanders’s office cited progressive economist Robert Pollin’s projection that the tax would bring in $2.4 trillion in revenues over 10 years.

Free college is one of Sanders’s signature issues. He’s called the prohibitive costs of higher education a “national disgrace.” It was one of many proposals that distinguished Sanders in the 2016 presidential primary against Hillary Clinton, who argued the government shouldn’t subsidize education for the wealthiest Americans. Three years later, it’s clear that Sanders’s vision is ascendant in the Democratic Party.

“We believe definitionally that if you are the upper elite, that you by definition would not have had to take out student loans,” Keane Bhatt, Sanders’s spokesperson, told Vox. “There is something to be said about simple, intelligible policies that build broad constituencies.”

Here’s how Sanders’s College for All Act would work:

The federal government would give states and tribes at least $48 billion per year, through a two-to-one federal dollar match program, if states commit to eliminating tuitions and fees at public universities and colleges.

To receive the federal funding, states and tribes would have to meet some requirements: Essentially, they’d have to show the Department of Education that they will maintain higher education and need-based financial aid funding and rely less on adjunct faculty to teach classes. States and tribes would also have to show that they can cover the full cost of higher education for the poorest families, those who earn less than $25,000. For tribal colleges with at least 75 percent low income student enrollment — students eligible for the Pell Grant — the federal government would cover 95 percent of costs to eliminate tuition and fees.

The federal funding has restrictions: It cannot go to administrators’ salaries, any merit-based financial aid, or non-academic buildings — like shiny new football stadiums.

While this is a universal program — students from any financial background would benefit from the elimination of tuition — the proposal specifically targets lower-income students by increasing the federal Pell Grant program, tripling funding for the work-study program, and creating a dollar-for-dollar federal match to states to eliminate additional costs related to going to college.

HBCUs and Minority Serving Institutions (MSIs) would also qualify for this federal funding. Sanders’s proposal allocates $1.3 billion per year to reduce tuition and fees at private nonprofit universities and colleges with at least 35 percent of students from low-income households. Roughly 200 institutions would be eligible, Sanders’s office said.

The proposal also caps student loan interest rates to the same rate the federal government pays for its debt.

All told, this bill, introduced with progressive Reps. Pramila Jayapal (D-WA) and Ilhan Omar (D-MN), is a more expansive version of Sanders’s original 2016 free college proposal. What was originally a tuition-free proposal with a provision for refinancing student loans has become a debt-free and tuition-free proposal.

It’s a clear departure from the free college plan that Hillary Clinton proposed and Sanders endorsed as the 2017 College for All Act. That bill would have eliminated tuition and fees for families making up to $125,000, conceding to Clinton’s argument that the government shouldn’t have to cover costs for families who can afford to send their kids to college.

There are several Democratic candidates in the field right now who share those concerns, but Sanders is no longer heeding them.

How Sanders’s plan compares to other Democrats in the race

Sanders’s 2016 campaign normalized free college in Democratic politics. In the current field, Warren and Sanders have similar proposals with one main difference.

Warren’s student debt relief is means-tested. As Vox’s Ella Nilsen explained, Warren’s plan cancels $50,000 in student loan debt for every person with household income under $100,000, and offers “substantial debt cancellation” to every person with household income between $100,000 and $250,000. Those making above $250,000 wouldn’t qualify. In total, Warren’s plan is estimated to cost $1.25 trillion over a decade — almost a trillion less than Sanders’s.

Sen. Kirsten Gillibrand (D-NY) has backed various proposals, including the more moderate Clinton/Sanders plan that eliminates tuition and fees for families that make up to $125,000 a year.

The big question: Will states buy in?

Because public colleges in the US are run at the state level, implementing a universal tuition-and-debt-free college program requires the states to buy in. Sanders’s proposal, like Warren’s, requires states to enter a voluntary agreement with the federal government. As Nilsen writes, “if states don’t want to take the money, their universities are left out of the equation.”

This is the uphill battle associated with all federal-state partnership programs — and it can backfire, as with the Affordable Care Act, where many conservative states rejected the health care program’s Medicaid expansion despite a far more generous federal match.

Sanders’s team doesn’t see the ACA as a cautionary tale, though; some red states voted to expand Medicaid in the 2018 midterm elections, as Bhatt, Sanders’s spokesperson, pointed out. And that won’t be a concern for private historically black colleges that might want to participate.

One of the other biggest criticisms of universal free college and debt relief proposals is an argument Clinton made in 2016: The government shouldn’t be subsidizing school for people who can easily afford it.

“Getting to free college for everybody is not a very progressive way to approach this because a lot of wealthy kids will benefit from that,” Sen. Michael Bennet (D-CO), who’s running a more moderate Democratic presidential campaign, told a voter at an Iowa campaign event in May. Buttigieg made a similar argument in April.

But in Sanders’s book, Americans are entitled to “the right to a complete education.”

“You have lower-class people, middle-class people, upper-middle-class folks all getting student debt relief and bolstering the value of college,” Bhatt said of Sanders’s vision. “If Ivanka Trump decides she wants to go to [Pennsylvania State University], there is no problem with that. That’s part of the thinking.”