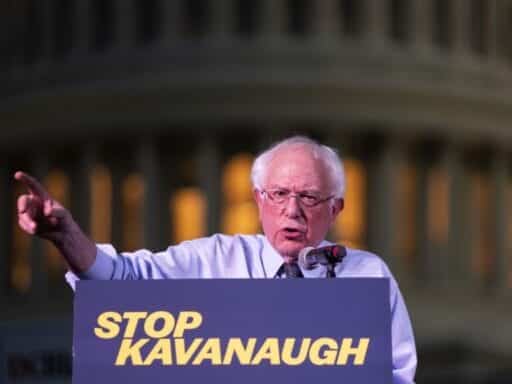 One possible version: What if the Court had 188 justices?

Sen. Bernie Sanders (I-VT) came out against court-packing as a way to end Republican dominance of the Supreme Court on Saturday. But he then suggested an alternative that is no less radical — neutralizing the Court’s Republican majority by demoting some of its members.

Some of Sanders’s rivals have embraced or, at least, expressed openness toward court-packing, adding additional seats to the Supreme Court to dilute its Republican members’ votes. Sanders, at a forum focused on how Democratic presidential candidates would approach an increasingly conservative judiciary, said he emphatically rejects such an idea.

Court-packing, Sanders told MSNBC’s Stephanie Ruhle during an event titled “Our Rights, Our Courts,” would produce a kind of death spiral for the Supreme Court.

“We add two more judges. The next guy comes in — maybe a Republican — somebody comes in, you have two more,” and before you know it, he said, “you have 87 members of the Supreme Court. And I think that delegitimizes the Court.”

But then he suggested another alternative: It may be possible to “rotate judges” off the Supreme Court and onto lower courts.

The Sanders campaign did not respond to a request for comment regarding this proposal.

It’s a novel response to the hardball tactics Republicans used to hold a Supreme Court vacancy open for more than a year, until President Trump could fill it with the archconservative Neil Gorsuch. But is Sanders right? Can Gorsuch simply be told that he’s being transferred to the United States District Court for the District of Colorado?

The short answer to this question is almost certainly “no.” But the longer answer is more nuanced. A President Sanders cannot simply reassign justices to lower courts, but he could potentially create a system where many different judges take turns serving as our nation’s most powerful jurists.

Is it legal to “rotate” justices off the Supreme Court?

The federal judiciary has three levels. District courts conduct trials and are typically the first judicial forum to hear a federal case; circuit courts (or courts of appeal) are the first recourse for litigants seeking to appeal a district court’s decision; and the Supreme Court sits at the top of the judicial pyramid, hearing a small percentage of the most vexing appeals.

It is well established that a judge appointed to one court may sometimes perform duties on a different court. District judges often sit “by designation” on circuit court panels. Retired Supreme Court justices typically remain members of the federal judiciary, and will occasionally hear a case on a lower court. In 1984, then-Justice William Rehnquist presided over a district court trial in Richmond, Virginia.

Yet while there are many examples of a Supreme Court justice temporarily assuming the duties of a lower court judge, the justice typically must consent to such an arrangement. It is highly doubtful that either Congress or a Sanders administration could reassign a justice to a lower court without that justice’s permission.

The Constitution provides that federal judges “shall hold their offices during good behaviour.” The “office” currently held by Neil Gorsuch is “associate justice of the Supreme Court of the United States.” Though there is some debate among scholars about what constitutes “good behaviour” under the Constitution, no reputable scholar that I’m aware of claims that a justice can be removed simply because their political agenda is at odds with the views of the president or of the majority party in Congress.

Absent some kind of misbehavior on his part, in other words, Gorsuch is likely to remain an associate justice for as long as he wants. Yet, while it would be difficult to strip a sitting justice of their current office, there may still be a way to effectively demote the current members of the Supreme Court.

In an influential paper published in the Yale Law Journal, law professors Daniel Epps and Ganesh Sitaraman suggest two ways to restructure the Supreme Court in the hopes of depoliticizing it. One of their proposals, which former South Bend, Indiana Mayor Pete Buttigieg often touts on the campaign trail, is to expand the Supreme Court to 15 justices and implement a nonpartisan selection method for five of those justices.

Epps and Sitaraman’s other proposal is a “Supreme Court lottery.”

But there would be a catch. Under Epps and Sitaraman’s lottery proposal, “the Supreme Court would hear cases as a panel of nine, randomly selected from all the Justices” — meaning that this panel would be randomly selected from among the nine current justices plus the 179 new justices. Epps and Sitaraman would also reshuffle this panel very frequently — a new panel of nine would be chosen every two weeks — although the proposal could be modified so that a particular panel would sit for a longer period of time.

The advantage of this “lottery” proposal is that it might be constitutional. Barring extraordinary events, Congress cannot strip a sitting justice of their “office,” but it can give the same office to a whole bunch of additional people. Under the lottery proposal, Gorsuch would remain an associate justice of the Supreme Court. He’d just have 179 new colleagues.

Moreover, it’s hardly unheard of for judges to hear cases on randomly assigned panels. The overwhelming majority of cases heard by federal circuit courts are heard by randomly assembled three-judge panels, not by the full appeals court. So if a small panel of appeals court judges can decide a case on behalf of their court, perhaps a panel of Supreme Court justices could do so as well.

To be clear, the constitutional case for a Supreme Court lottery is hardly airtight. Recall that the Constitution provides that federal judges “shall hold their offices during good behaviour.” The current justices might argue that one of the essential attributes of their office is the right to sit permanently on the nation’s most powerful panel of judges — and thus any legal regime that strips them of that right is unconstitutional.

It’s also far from clear that rotating judges would prevent the Supreme Court from undercutting Sanders’s agenda. In just three years in office, Trump’s appointed more than a quarter of the judiciary, and many of his judges hold views that are well to the right of the current median justice.

One danger of randomly selecting members of the Supreme Court is that there’s no guarantee that the lottery won’t select James Ho, Neomi Rao, and three other Trump judges who are well to the right of the Roberts Court. Such a panel would only serve temporarily, under the lottery system, but that could be all the time they need to declare much of Sanders’s accomplishments — and potentially many of the New Deal and the Great Society policies — unconstitutional.

Which brings us back to the proposal Sanders has already rejected: court-packing.

The downsides of court-packing are myriad. Sanders is right that it is likely to inspire retaliation — Republicans can add justices too if they regain control of Congress and the White House. And Sanders is also right that court-packing will tend to delegitimize the Supreme Court.

Red states are likely to engage in massive resistance against a Supreme Court packed with Democratic appointees. And, as the Jim Crow South’s massive resistance to Brown v. Board of Education (1954) demonstrates, such resistance can be very effective even when most of the country accepts the legitimacy of the Court.

But Republicans also believe that they won control of the Supreme Court fair and square, and are likely to treat any effort to strip away that control as illegitimate. If the Roberts Court overrules Roe v. Wade (1973), red states are likely to engage in massive resistance if Roe is reinstated by a packed Court. They are also likely to do the same if Roe is reinstated by a panel of liberal justices chosen by a lottery.

All of which is a long way to say that there probably isn’t any way to change the makeup of the Supreme Court that won’t be met with resistance. If Sanders believes that a lottery system is preferable to a packed Court on the merits, then he should push the policy that he believes to be best.

But he shouldn’t expect the same partisans who wouldn’t let President Obama appoint anyone at all to a Supreme Court vacancy to accept a new system where Republicans aren’t guaranteed control of the judiciary. One the Supreme Court becomes a partisan prize, it is devilishly hard to take that prize away from the party that captured it.

10 things we learned about Earth since the last Earth Day
The WeWork CEO’s outsize power is one reason the company is imploding
The case for weakening the Supreme Court
The private chefs risking their lives to feed the super rich
Joe Biden still leads among black voters nationally
This nurse is treating the sickest coronavirus patients. Trump still wants to deport him.