Better Call Saul is nearing its end game. Here’s how long its showrunner thinks it has left. 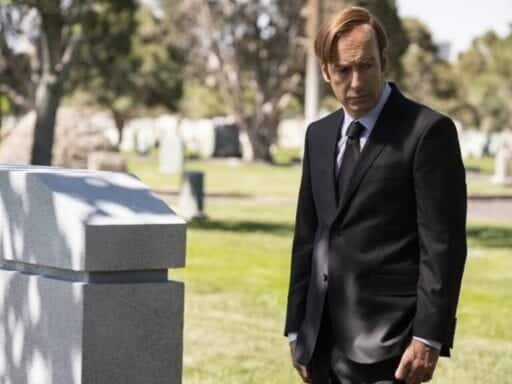 “I don’t think the end of the story is Walter White walking in and his whole world falling apart.”

AMC’s Better Call Saul recently completed a terrific fourth season, which brought the character to a real crisis point in its finale. The show ably navigated that finale — one of my favorite TV episodes of the year — and that’s all I’ll say for those of you who haven’t seen it.

Recently, Better Call Saul showrunner Peter Gould (who co-created the series with Vince Gilligan and wrote the episode of Breaking Bad in which Saul Goodman originally appeared) joined me for the latest episode of my podcast, I Think You’re Interesting. We talked about the origins of the show, as well as the deeper questions it raises about human philosophy and morality.

But toward the end of our chat, we embarked on a spoiler-filled discussion of season four’s finale, especially the big turn at the end. And to move beyond this point, those of you who haven’t seen the show should really bail. Begone, because spoilers follow.

After Gould and I had discussed just why this was the right time to turn Jimmy McGill into Saul Goodman, what might happen to Kim in the near future, and why Mike’s storyline this season culminated in his murder of Werner, I had one last, pressing question: Just how much longer can this show go on? Gould’s answer surprised me somewhat, because I had never thought he might tell more stories about this character after Breaking Bad’s end (beyond the short flash-forwards to that timeline that have started each season). But the more I thought about this idea, the more it made sense.

That portion of our conversation, lightly edited for length and clarity, follows.

Obviously, you could just run this show forever as “Saul takes a case of the week,” and I would watch it. But do you have the sense that you’re approaching some sort of end game?

Yeah. I think the similarity with Breaking Bad is that this is a story with a beginning, a middle, and an end, and I think we’re probably closer to the end than to the beginning.

It’s a different kind of story, because I always go back to that saying, which I heard as a kid, which is, “Where there’s life, there’s hope.” We know that Jimmy/Saul/Gene lives, and so I want to know what is the end of this man’s story? I don’t know. I don’t think the end of the story is Walter White walking in and his whole world falling apart. There seems to be more to it than that. I would like to see more of Gene Takovic [Jimmy’s new identity post-Breaking Bad]. I’ll tell you that.

And Breaking Bad ran 62 episodes. We just premiered our 40th. Boy, it would be wonderful to have this box set, and you turn it one way, and it’s the RV from Breaking Bad, and then you flip it around, and it’s Jimmy’s Esteem from Better Call Saul. Bryan Cranston and I were in his trailer once, and I said, “Wouldn’t it be great, and you could have a row of DVDs, and the first one is the pilot of Breaking Bad, onto the end.” And we did it. Vince, and Bryan and all of us did it together, led by Vince, of course. It’d be wonderful if this show, too, had a beginning, a middle, and God-willing a satisfying ending, and then it has a relationship to this other show.

I think that would be fun. So my hope would be that we run roughly the same length as Breaking Bad. The one thing I wouldn’t want to do is tread water or feel that we’ve overstayed our welcome.

I sort of thought about Breaking Bad for a long time as about a man everybody assumed was good who deep down was not that good, and I thought about this show for a long time a a man who everybody assumed was bad, who deep down was not that bad. Now that we’ve seen all this water under the bridge, would you say that’s still an accurate read? Or has Jimmy sold himself out?

I think everybody has potential to go any which way. Maybe it’s a mechanistic way of looking at things, but I think of decisions, the choices people make. It’s the difference you make in the world that says whether you’re good or bad.

I know there are other ways to look at it. There are religious ways that say what’s good or bad is how you feel inside, or your relationship to the eternal. And those are obviously legitimate ways. But as a dramatist — oh, that’s too pretentious — as a television writer, I like to think of it as the decisions that people make. You add up the decisions, and that’s who you are.

Part of the fun of narrative fiction is you get to experience different kinds of lives, and you imagine, “What would my life be like if I had made these decisions, or if I was in this person’s shoes?” That’s the glory of being human is that you can project yourself into someone else. Those are the things that I think about more than “Is the essence of the person good or bad?”

If Walter White had made the decision to stop cooking meth after that first adventure when he made all that money, he might have been a much better person. He had a lot of opportunities to change his ways. I think a lot in terms of character tests. I think we all do in the writers’ room. You always hope that you don’t have too many of those in your life, because you don’t want to flunk them.

For so much more with Gould — including his thoughts on why comedic actors can be so perfect at performing drama — check out the full episode.

S-Town, the controversial hit podcast, is being sued for exploitation
The soothing, slightly sinister world of productivity hacks
The QAnon supporters winning congressional primaries, explained
Why the coronavirus canceled the NBA
How the pandemic got people smoking again
George Floyd’s brother’s plea to Congress: “Stop the pain”