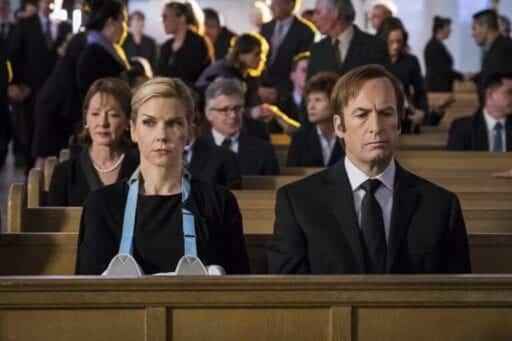 Notice: Undefined offset: 0 in /var/www/wp-content/plugins/seo-optimized-images/seo-optimized-images.php on line 131
Share
Loading...
From the very first cold open of the very first season, it’s been clear that Better Call Saul is capable of reaching — even surpassing — the emotional heights of its progenitor, Breaking Bad. That’s rare to be able to say about a spin-off, but Better Call Saul, which kicks off its fourth season tonight on AMC, is a rare show.

Granted, that might not be immediately obvious to anyone who came over from Breaking Bad expecting the show to contain the kind of action that facilitated the rise and fall of drug kingpin Walter White (Bryan Cranston). It’s not gangland standoffs that lend Better Call Saul dramatic tension or emotional heft; rather, it’s an attention to detail, turning the minutiae of everyday life into moments that feel practically titanic.

Turning Jimmy McGill (Bob Odenkirk) into Breaking Bad’s notorious Saul Goodman has involved a balancing act between portraying the slow dissolution of Jimmy’s life as a legitimate lawyer and the ins and outs of the drug world into which he’ll eventually dive. It speaks to the focus — and strength — of the show that the latter part, which heavily involves Breaking Bad favorites Mike Ehrmantraut (Jonathan Banks) and Gus Fring (Giancarlo Esposito), doesn’t simply blow the former out of the water.

In fact, more often than not, Jimmy’s guns-and-drugs-less struggle with his brother Chuck (Michael McKean), and his relationship with fellow lawyer Kim Wexler (Rhea Seehorn) are more compelling. Going into season four, turning little details into detonations is still the series’s major strength — there’s no show that does it better.

Better Call Saul’s agility with high-impact details is perhaps best illustrated by the black and white flash-forwards that open every season, which take place after Walter White’s empire has crumbled and Jimmy has taken on yet another alias. As “Gene,” he’s a mall Cinnabon manager in Omaha, just as he’d predicted in his last appearance on Breaking Bad. But for all the temptation to laugh at just how prescient he was, not to mention his new mustache, it’s impossible to do so. It becomes clear how even the smallest details — a man staring at him, a number on his driver’s license — might mean the difference between life and death. Season four’s cold open ramps things up even further, though, as always, it might just be a trick of Gene’s imagination.

Gene’s quiet new life and the use of black and white serve as a neat counterpoint to just how loud and colorful we know Saul Goodman to be. On the surface, “Saul Goodman” is a bit of a caricature. The combover, the colorful shirts, the zany ads — he’s larger than life. As such, knowing that Saul is in Jimmy’s increasingly near future only makes it more remarkable that Better Call Saul’s fourth season hasn’t metastasized into a parody of a legal drama. Even the most shocking turns in Jimmy’s storyline — the season three finale, for instance, in which Chuck committed suicide by burning his house down — don’t feel far-fetched or impossible; their grounding in a firmly real emotional structure precludes the ability to watch the show passively.

It’s not difficult to imagine Chuck’s death registering as a one- or two-episode drop into the narrative bucket on any other show, but in Better Call Saul, it affects the entire landscape. Of course, in a show where how a wall gets painted speaks volumes about a character’s essential nature, any death is going to be a major development; one so entwined with the protagonist’s personal and emotional history, as Chuck’s is with Jimmy, is naturally going to be a seismic shift for the series’ characters.

And, as in real life, everyone has a different way of processing grief, and despite best intentions, those methods of coping aren’t always compatible, and send fractures through relationships that are already on unstable ground.

Speaking of which, the slow, inevitable dissolution of the relationship between Jimmy and Kim has been occurring through moments — glances, misplaced words — rather than soap opera hysterics and obvious rifts. Credit where credit is due: Seehorn and Odenkirk knock it out of the park. The briefest, most infinitesimal beats between them do the work of entire conversations, demanding that just as much (if not more) attention be given to what goes unsaid as to what’s made explicit. A grimace can say more than a gunshot.

With the show’s emphasis on interiority rather than obvious outward signifiers, it shouldn’t come as a surprise that Nacho Varga (Michael Mando) has emerged as the best part of Better Call Saul’s gangland half. His attempts in season three at gaining a measure from Hector Salamanca (Mark Margolis) only led to him falling under Gus Fring’s thumb, and even putting his father (Juan Carlos Cantu) in danger.

Nacho’s struggle with his moral compass is what makes him so compelling — Salamanca and Fring are already cruel through and through, though they project that cruelty in vastly different ways — and makes him the yang to Jimmy’s yin. The question of whether Slippin’ Jimmy is a product of nature or nurture is Better Call Saul’s organizing principle, though details scattered throughout the show, such as the title of an episode from last season, “Sunk Costs,” hint at an answer. Nacho isn’t quite so easy to pin down — he’s Pinkman-esque, in that sense.

Though he’s not as much of a victim of circumstance as Aaron Paul’s Jesse Pinkman, Nacho’s certainly not as responsible for his own misery as Jimmy and Walter White, and his progression into ruthless territory is a means to an end rather than an embrace of his true nature. Everything he does is meant to protect those he cares about, whether it’s his father or his childhood friends who’ve also ended up in the drug trade.

One of the most affecting scenes early in the new season involves Nacho and his father, who disowned Nacho last season after being forced to harbor drug money. He can barely look at his son anymore, but before he leaves, can’t resist asking Nacho when he’ll finally be out of the game. It’s a scene I’ve thought about more often than the other trouble Nacho finds himself in the three episodes made available for review.

The same principle goes for the development of Mike Ehrmantraut, who hasn’t yet been given any material to match season one’s “Five-O,” which didn’t advance the plot of Better Call Saul so much as it filled in the character’s past and motivations in a single fell swoop. Despite the inclusion of a shoot-out, the best moments of the episode were little ones, from 38 Special’s “Hold On Loosely” playing on a jukebox during a key revelation to the simple act of letting the eternally tough Mike cry.

Though not every question asked in Better Call Saul actually carries tension — the events of Breaking Bad provide more than a few answers — the series reliably stands out, from both the series that inspired it and television drama more generally, by emphasizing the ordinary, which is inherently more difficult to properly capture and make interesting.

No show on the air does a better job of turning moments that ought to be blips on a viewer’s radar into moments of captivating drama, and as the story moves into increasingly tragic territory in its fourth season, it’s a necessary strength to keep Jimmy’s misfortunes (self-imposed or otherwise) something to care about, rather than to revel in.

Oklahoma primary election 2018 live results: governor and medical marijuana ballot measure
R. Kelly released a 19-minute song called “I Admit.” It doesn’t admit much.
Instagram’s chief says breaking it off from Facebook would make Instagram a less safe space
AOC and Ilhan Omar call for Stephen Miller’s resignation over his promotion of white supremacist art...
A pro-Trump conference showed a fake video of a Trump shooting the media and his opponents
The mind, explained in five 20-minute Netflix episodes

What should Democrats do about the Supreme Court?