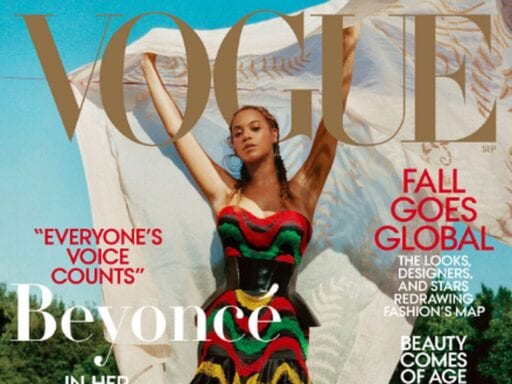 Who had creative control of Vogue’s September 2018 issue: editor-in-chief Anna Wintour or Beyoncé?

Vogue has unveiled its September 2018 issue, and its cover star is Beyoncé Knowles, looking dreamy and utterly radiant in a series of pictures by the 23-year-old photographer Tyler Mitchell. As with all things Beyoncé, people on social media are gushing about the images, which were taken at an estate in the English countryside.

The September issue of Vogue always gets a lot of attention because it’s the biggest of the year, loaded with ad pages and celebrity bait. (There’s an entire 2009 documentary dedicated to the making of it.) This year’s edition became the subject of an unusual amount of interest, however, after a Huffington Post article leaked details about it in late July.

Beyoncé would appear on the cover, the report said, but in an unprecedented (and shocking) move, Vogue’s notoriously exacting editor-in-chief Anna Wintour had apparently given the singer total control over the photography and associated article. This information, some of which was confirmed on Monday when Vogue released portions of the issue, caught and held people’s attention for a few reasons. It’s a conversation about power, Vogue’s history with racial diversity, and Wintour’s retirement plans.

Now that Vogue has unveiled its September issue, we can answer some of our own questions about it.

Why is this issue such a big deal?

Particularly because Tyler Mitchell is the first black photographer to shoot the cover of the 126-year-old American Vogue. The magazine is the leading publication in an industry with longstanding diversity issues, so this is a monumental event — though a telling one if the magazine’s cover star, and not its editor-in-chief, used her “power and influence to get him that assignment.” According to the Huffington Post, Beyoncé picked Mitchell herself.

This issue also speaks to the flux of power in the beleaguered magazine world. An Atlantic think piece published hot on the heels of the Huffington Post’s report cited the arrangement as “the culmination of a long trend: the waning dominance of old-media institutions in relation to new-media stars.”

On top of that, persistent rumors that Wintour is preparing to step down from her post as EIC — persistently denied by Vogue’s publisher, Condé Nast — have led to speculation that this may be her last September issue ever.

This is key to understanding the fascination with Beyoncé’s cover story. Wintour is notoriously demanding about her vision, and September is the magazine’s most important issue of the year. Why would she completely cede control now? You’d expect Anna Wintour’s final September edition to be the most Anna Wintour magazine of all time.

Who is Tyler Mitchell, and where else can I find his work?

Originally from the suburbs of Atlanta, Mitchell got his start shooting music videos while still in high school. Since then, he has photographed young gun control activists for Teen Vogue and Spike Lee for the cover of Office magazine; he’s also worked for brands like Marc Jacobs and Converse. Vogue published a profile of Mitchell the same morning it dropped the Beyoncé cover.

This isn’t Mitchell’s first Vogue credit. He delivered a feature on Deadpool star Zazie Beetz for the May 2018 issue and has shot digital stories about music festival style and Comme des Garçons fans.

And you didn’t ask, but Mitchell’s historic work for Vogue comes at a major moment of transition for the magazine’s photography. In early 2018, Vogue issued statements saying that it would no longer work with Mario Testino and Patrick Demarchelier, two names on a long list of fashion photographers who had been accused of sexual misconduct.

Testino and Demarchelier were also favorite collaborators of Wintour and frequently shot the cover of the magazine. All of a sudden, a void opened up — clearing a path for new creatives to shoot the cover of Vogue, and for Vogue to switch up its aesthetic in the process.

Did Beyoncé singlehandedly choose Mitchell to photograph her?

The question of whether Beyoncé chose her own cover photographer draws attention to the underlying power dynamics of a Vogue cover. It’s a mutually beneficial relationship: A Vogue feature burnishes a celebrity’s image, and the magazine relies on popular cover stars to sell copies on the newsstand and drive traffic to its site.

Generally speaking, the power is understood to rest with Wintour, which makes the idea of Beyoncé calling all the creative shots so interesting.

Based on Beyoncé’s cover story, it certainly seems like she weighed in on the decision.

“Until there is a mosaic of perspectives coming from different ethnicities behind the lens, we will continue to have a narrow approach and view of what the world actually looks like,” she says. “That is why I wanted to work with this brilliant 23-year-old photographer Tyler Mitchell.”

“The concept and the photographer was entirely Vogue’s, specifically Raul’s,” said Wintour, who spoke to Business of Fashion with Condé Nast creative director Raul Martinez. He said he first became aware of the 23-year-old photographer when Mitchell photographed gun control activists for a Teen Vogue digital cover in March, and then became more acquainted with his work at the photography studio and exhibition space Red Hook Labs through Jimmy Moffat, a mentor to the young photographer.

After being presented with options for photographers, Beyoncé immediately approved of Mitchell, recognizing the historic implications of the choice. Her record label Parkwood Entertainment knew about Mitchell too, and he had photographed her sister Solange Knowles.

Did Beyoncé give Vogue an interview? Doesn’t she not do that?

A worthy question, since Beyoncé appeared on the September 2015 cover of Vogue without speaking to the magazine for a written feature, as is typically expected of a celebrity in that position. (She’s famous for, among other things, doing that.) Refusal to give an interview for a cover story is a show of power if there ever was one, evidence that the publication needs her more than she needs the press.

This time around, Vogue published a first-person piece from Beyoncé’s perspective, culled from an interview with Clover Hope, Jezebel’s culture editor. The article is incredibly personal, covering her recovery from an emergency C-section, body acceptance (“Right now, my little FUPA and I feel like we are meant to be”), her desire to open doors for younger artists of color, and her 2018 Coachella performance.

It’s also significant that Vogue hired Hope to interview Beyoncé. Despite being a women’s magazine that almost entirely features women on its cover, Vogue has historically given a notable number of its big celebrity assignments (see: Kendall Jenner, Serena Williams) to writers who are older, white, and male.

Is Anna Wintour leaving Vogue or what?

Not yet. Right after the Huffington Post published its report on Beyoncé’s cover story, Condé Nast CEO Bob Sauerberg issued a statement on Twitter saying that Wintour “has agreed to work with me indefinitely in her role as @voguemagazine editor-in-chief and artistic director of Condé Nast.”