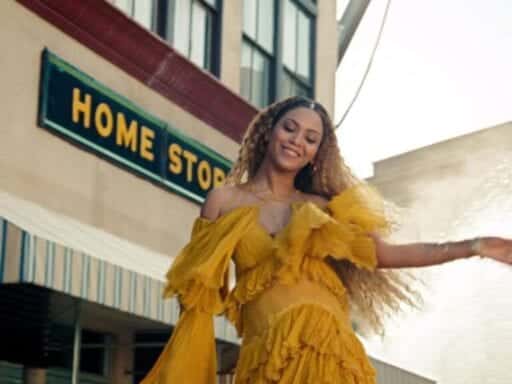 The superstar helmed one of the decade’s most radical films.

Beyoncé’s Lemonade was technically an album, her sixth studio record as a solo artist. But it wasn’t just an album. It was an event, a full-fledged phenomenon, a bolt of lightning on a late-April day in 2016. It sparked rhapsodies and raptures, inspired numerous other artists, and generated full-album responses. Adele broke her Album of the Year Grammy in half in tribute to the album as a stand against what she saw as its snub. Unbreakable Kimmy Schmidt’s Titus Andromedon character performed a glorious homage. And James Comey sang from Lemonade during an FBI briefing, which is how you know something’s really achieved full cultural saturation.

Most importantly for me, though: Lemonade came with a “visual album,” which was really a 65-minute art piece that’s easily one of the decade’s best films. A reported 787,000 people watched its hastily announced HBO premiere before it arrived on the music streaming platform Tidal, owned by Beyoncé’s husband Jay-Z (whose philandering was also the ostensible target of a number of songs on the album); eventually it began trickling out to other platforms.

Gutsy and gorgeous, Lemonade the film flouts genre, just like the R&B-rock-country-soul album. It’s both fiction and nonfiction, mixing fantasy and dream sequences with imagery from the 1991 drama Daughters of the Dust and home videos from Beyoncé’s family. It’s horror and comedy, drama and romance, magical realism and just plain old magic.

The film is divided into eleven chapters, each corresponding to a song on the album with titles that expatiate its arc: “Intuition,” “Denial,” “Anger,” “Apathy,” “Emptiness,” “Accountability,” “Reformation,” “Forgiveness,” “Resurrection,” “Hope,” and “Redemption.” That’s a narrative of reconciliation. And textually, the album seems to be about a relationship (presumably Beyoncé’s own marriage to Jay-Z) nearly torn apart and then painstakingly knit back together.

But on screen, its broader subtext becomes much more explicit — it’s a narrative, really, of brokenness and reparation, filtered through the particular experiences of black women in the American South. As Ashley Ray-Harris wrote at the AV Club in 2016, every image Beyoncé and her collaborators tells a story of “the painful realities of the black female experience in America,” of being betrayed by systems that take and do not give back, and of finding hope in one another to carry on.

“The journey in Lemonade centers on a movement for Beyoncé — but really all of us black women by proxy — from pain toward healing and empowerment,” Syreeta McFadden wrote at the Guardian.

So the film’s imagery ranges from the simple (an intimate piano ballad) to the fantastical (Beyoncé appears as Oshun, the Yoruba goddess of fertility) to the painfully real, as when the mothers of Trayvon Martin, Michael Brown, and Eric Garner hold up images of their sons images and dare us to look away. Poetry by Somali-British poet Warsan Shire is read in the interstitial moments between songs. There are visual homages to Beyoncé’s native Texas and to the culture of New Orleans, to canonical indie classics and to Yoruba tradition. It is a rich, rich text.

That’s a lot of what makes it so important as a work of cinema. Watching Lemonade is a stunning experience — I think I watched it four times during the first week after its release, and I wrote about its religious imagery. And it’s a remarkably cohesive experience, too, given the number of collaborators Beyoncé worked with. It both hews to and challenges the auteur theory, the idea that the director of a movie is more of the “author” than the writer; in this case, there are seven credited directors, but it’s unmistakably the work of one artist — Beyoncé.

Yet those directors are important artists in their own right. They include, among others, the video artist Kahlil Joseph and Melina Matsoukas, whose first feature film, Queen & Slim, came out in late 2019. The avant-garde documentarian Khalik Allah worked as a cinematographer and second unit director on Lemonade; in 2019, his documentary Black Mother was one of the best films of the year.

The entire Lemonade project is a great work of art on its own, and it’s also an unrelentingly political one, a mode people weren’t often used to seeing from Beyoncé in the past. It encapsulates many of the debates and discussions that would grow to animate the film and art worlds this decade — issues of representation on film, of who gets to control the final product, of mixing and remixing the past, of what political art might look like, of the potential reach of films by and starring black artists. By creating the visual album according to her own vision, choosing the means of distribution, and letting the work exist outside of any boxes, Beyoncé managed to make a film that’s both about liberation and an act of liberation in and of itself.

And she did it all while challenging stereotypes and crafting a genuinely beautiful film that demands respect and earns it. Most of the movies that showed up at the multiplex this decade are already utterly forgotten. Lemonade, I’ve no doubt, will outlast us.

Lemonade is available to digitally rent on iTunes, and Tidal subscribers can stream it.

The White House argues the impeachment inquiry is “constitutionally invalid.” They’re wrong.
Amazon white-collar employees are fuming over management targeting a fired warehouse worker
Lil Nas X tried to explain why he came out as gay. Kevin Hart: “So what?”
The DNC is a reminder that America is a big, diverse country, racked by disaster
How ballots are actually counted, explained by 3 election officials
Joe Biden wins the Arkansas Democratic primary