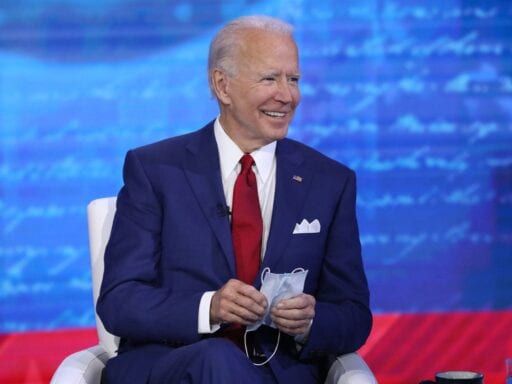 In his 1943 paper “A Theory of Human Motivation,” Abraham Maslow proposed his hierarchy of human needs. At the bottom of the pyramid were the basics: food, water, warm, rest. As you traveled up the pyramid, the needs got more specific, more abstract: belonging, prestige, self-actualization.

Over the past four years, we’ve slipped far, far down the hierarchy of political needs. The question isn’t whether the president is a policy genius, a generational orator, a historic legislative tactician, or a masterful manager. It’s whether he’s a white supremacist. Whether he’s a conspiracy theorist. Whether he’s a liar. Whether he’s extorting foreign governments to investigate domestic rivals. Whether he is a Covid-19 superspreader.

In 2016, I spent a few weeks reporting on why there was so little enthusiasm for a Biden presidential campaign among then-Obama staffers. Everyone I spoke to liked Biden, usually a lot. They extolled his kindness, his decency, his loyalty. It wasn’t those higher-order questions that worried them. He ran messy, inefficient meetings. He wasn’t a policy savant like Hillary Clinton. He didn’t have Obama’s technocratic cool or rhetorical ease. He felt like Obama’s partner, not his successor.

In 2020, Biden looks likely to be Trump’s successor, and his performance at the ABC town hall showed why. I’ve watched, for my sins, a countless number of political town halls. By the traditional standards of these things, Biden’s performance wasn’t especially masterful. He was clear and specific, and on the right side of most of the issues. But on the substance, it wasn’t brilliant rhetoric or stunning policy vision. It was serviceable work.

But 2020 isn’t 2016. More fundamental questions are being asked. And on those levels, Biden excelled. Throughout the night, the meta-message of Biden’s performance was that decency is on the ballot in 2020. After he responded to an audience member, he’d often say, earnestly, “I hope that answered your question.” After a long reply to a young voter whom he could see he wasn’t convincing, Biden said, “There’s a lot more, if you can hang around afterward, I’ll tell you more. I really mean it.” He really seemed to. (If you watched the livestream, you could see that a half-hour after the event ended and the mics were turned off, Biden was still there, taking audience questions.)

At about the same moment that Trump was flirting with QAnon support at his town hall aired on NBC, Biden was saying, “The words of a president matter. No matter whether they’re good, bad or indifferent, they matter. And when a president doesn’t wear a mask or makes fun of folks like me, when I was wearing a mask for a long time, then people say, well, it mustn’t be that important. But when a president says, I think this is very important — for example, I walked in here with this mask, but I have one of the N95 masks underneath it, I left it in my dressing room — I think it matters.”

At the same moment that Trump was refusing to disavow QAnon, Biden on ABC was saying that “when a president doesn’t wear a mask, or makes fun of folks like me when I was wearing a mask for a long time, then people say it mustn’t be that important.” A jarring contrast. pic.twitter.com/rqppKQDUrs

Toward the end of the evening, a mother with a transgender daughter asked Biden how he’d protect the lives and rights of LGBTQ Americans. Biden answered with his policies, but he also told a story of being a kid and seeing two men kiss as his father let him out of the car. “My dad looked at me, he said, ‘Joey, it’s simple. They love each other.’” The idea, Biden continued, “that an 8-year-old, a 10-year-old, decides, ‘I want to be transgender. That’s what I think I’d like to be. It’d make my life a lot easier.’” And then he made a disbelieving face. “There should be zero discrimination,” he concluded.

To my eye, the answer that expressed Biden’s politics most clearly and spoke to this moment most directly, came when he was asked, “As president, how will you avoid the temptation to exact revenge and instead take the high road?” Biden replied, “In politics, grudges don’t work. They make no sense. I really mean it.” And he does. What would it feel like, after four years of a presidency built on grudges, powered by grudges, to have a president who believed that?

Biden wasn’t my favored candidate in 2020. I’m moved by the wonks, the visionaries, the candidates with grand plans and sweeping theories of political change. Biden’s approach to politics is often a rejection of that; an appeal to a quiet, middle-path approach to governing that I fear will crash on the shoals of Republican obstructionism. But however Biden ultimately governs, the secret of his campaign is that he understood that political style comes as a relief to many Americans right now, that it answers their fundamental need for a politics that doesn’t fill them with fear and shame.

Biden was right about the level of our politics right now. He was right about what Americans were looking to hear. The message of Biden’s town hall was simple: Politics can feel like this — gentle, decent, concerned, I hope I’ve answered your question — or it could continue to feel like the circus you found if you flipped over to Trump’s town hall on NBC.

The coronavirus cruise ship outbreak confirms cruises are bad
What to expect at Supreme Court nominee Amy Coney Barrett’s confirmation hearings this week
It took 3 hours for the EPA to tell staff they had a new boss
Red-state Senate Democrats are redoubling their efforts to protect Obamacare
I love movies. That’s why I hate the Oscars.
The Hatch Act, the law Trump flouted at the RNC, explained