Biden charts a path to a post-pandemic normal, with July 4 as his target 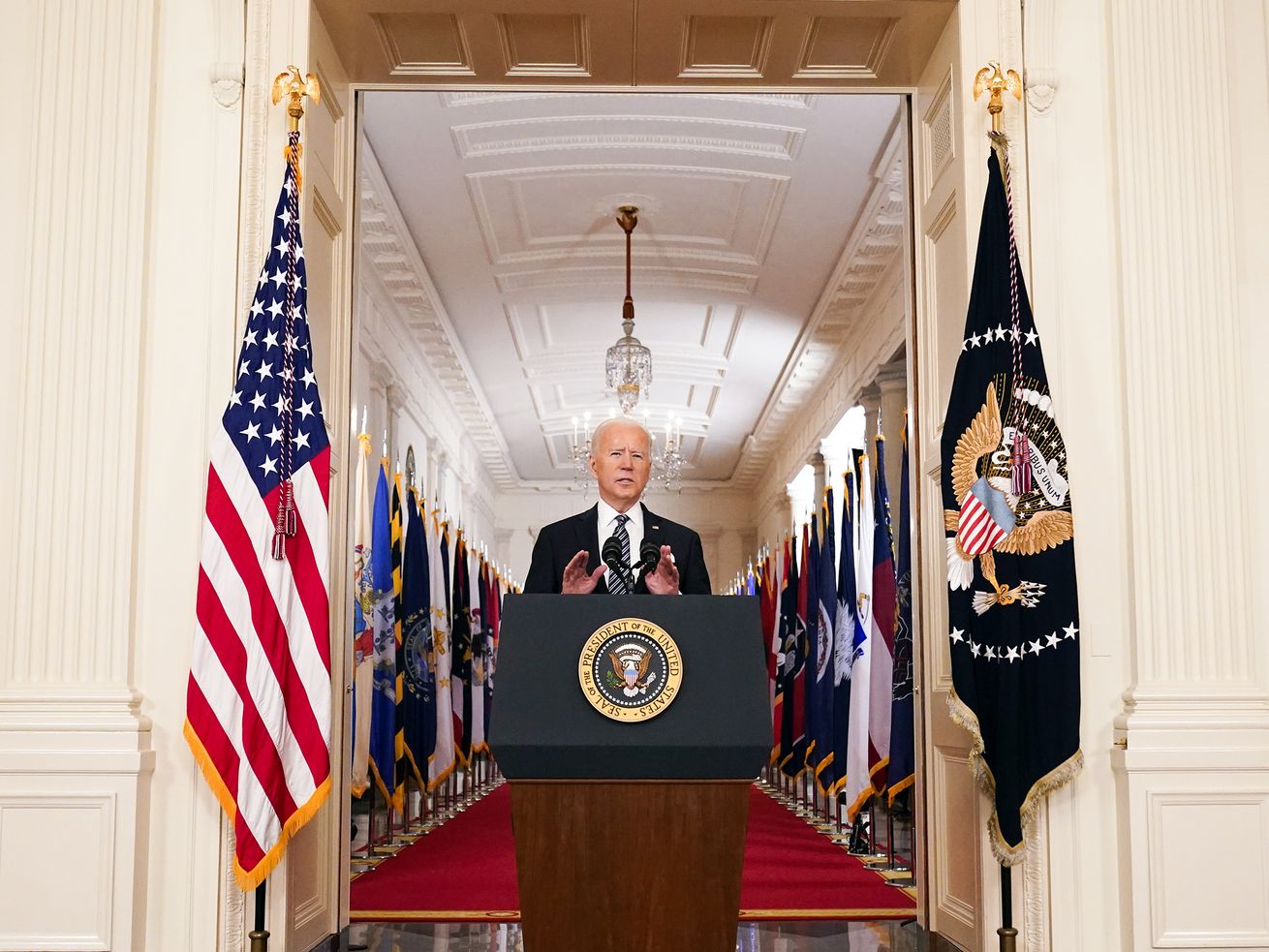 Biden marked a grim anniversary but has hope for the future in his first primetime address.

President Joe Biden said he sees life in America returning to some semblance of a post-pandemic normal by July 4, predicting that Americans will be able to safely gather in small groups to celebrate Independence Day.

The president’s speech marked the anniversary of a grim year: Nearly 30 million Americans have been infected with Covid-19, and more than 530,000 have died from it, exceeding the death toll of World Wars I and II, plus the Vietnam War and 9/11. Biden said he carries a card updated with the nation’s death toll on the back of his schedule.

“While it was different for everyone, we all lost something,” Biden said, speaking about families who lost loved ones and couldn’t say goodbye in person, those who lost their jobs, and millions living in isolation for months. “A collective suffering. A collective sacrifice. A year filled with the loss of life and the loss of living for all of us.”

Halfway through his first 100 days, and hours after he signed the American Rescue Plan — a $1.9 trillion bill that puts money towards vaccine distribution, stimulus checks, testing, school reopening, unemployment, and more — into law, Biden was ready to promise better days ahead.

The president laid out a detailed plan to get more vaccines into arms; Biden is using his presidential authority through the Department of Health and Human Services to direct states, tribes, and territories to make all adults eligible for a Covid-19 vaccine no later than May 1, “months ahead of schedule.” Biden’s plan doesn’t yet have a date for vaccinating children.

Administration officials announced they’d increase the number of places where Americans could get a shot, as well as the number of people who could administer shots. Dentists, veterinarians, medical school students, and paramedics would all be considered vaccinators. The administration will also launch a website to help Americans find vaccines near them. Biden’s White House will also put its focus on reopening schools, aided by the $130 billion in the recently passed stimulus bill.

Biden is making a big bet that Americans have been hungering for the government to be more involved in their lives amid the pandemic, not less. His vision is government as a force of good, rather than the everyone-for-themselves era of government that has prevailed since the 1980s.

“Look, we know what we need to do to beat this virus,” Biden said. “Tell the truth. Follow the scientists — the science. Work together. Put trust and faith in our government to fulfill its most important function, which is protecting the American people.”

The White House has often described the fight against the virus as a “wartime” effort, as Covid-19 has taken a tremendous toll on the American public — disproportionately impacting Black and brown communities. Biden echoed that on Thursday night.

“It’s truly a national effort, just like we saw during World War II,” he said, pleading with Americans to get vaccinated and continue to wear masks. “I will not relent until we beat this virus, but I need you. I need every American to do their part.”

July 4 is somewhat of a soft opening date for the White House; administration officials stressed they don’t consider that date as when the country should be fully reopened, with people returning to offices or large events like concerts or sporting events being held at full capacity. Senior administration officials also emphasized that the public would have to do their part to curb the spread of variants, continuing to mask and social distance throughout the spring and part of the summer.

“The president will talk about small gatherings like a barbecue in your backyard in your neighborhood. He will be clear that does not mean large events where lots of people gather,” a senior administration official told reporters, adding, “This depends on the progress we make on vaccinations.”

As of mid-March, nearly 330 million vaccine doses have been administered, and administration officials have revised their projections of getting every adult vaccinated from the end of summer to the end of May. Around 2.2 million people are being vaccinated per day; if that pace continues, the US could see life return to a pre-Covid normal by summer, Dr. Anthony Fauci told McClatchy recently.

Paired with the passage of the American Rescue Plan, the Biden administration is also putting a large emphasis on reopening schools safely. The Covid relief bill contained $130 billion to get supplies to meet the Centers for Disease Control and Prevention’s guidelines for reopening, as well as implementing regular screening.

Biden also took time in his speech to push back against a wave of harassment and, in some cases, violence, against Asian Americans after then-President Donald Trump spent months using racist names for the virus and associating it with Asian Americans, as Vox’s Li Zhou reported.

Returning the country to normalcy has always been Biden’s guiding principle. When he announced he was running for president in May 2019, he framed his candidacy as a return to a post-Trump normalcy. But when the Covid-19 pandemic hit the US in March 2020, and into the following months, Biden and his aides realized that their biggest challenge wasn’t getting the country back to where it was before Trump — it was to leave the country fundamentally stronger and more equal than they found it.

“It wasn’t enough to go back to the normal pre-pandemic and pre-Trump,” Biden’s campaign pollster John Anzalone told me. “We had to do better in terms of the equality of these things. [It] was a different set of challenges than we’ve got a president that isn’t presidential.”

Biden and his aides were betting that the public wanted a quietly capable government — one that wasn’t governed by erratic tweets, and one that the American people could even forget about every once in a while. But throughout his presidential campaign, the Covid-19 pandemic and Trump’s bungled response to it convinced Biden that his presidency needed to make a profound mark.

“Biden’s been very clear: To get back to where we were sets the bar way too low,” Jared Bernstein, who now serves on the White House Council of Economic Advisers, told Vox. “Much like FDR faced a structural crisis of economic insecurity, we’re at a similar place. The vice president recognizes that the extent of market failure here is not something you can fix with a Band-Aid and that structural reforms are necessary.”

What could take more time — and what the Biden administration will turn to next — is getting the nation’s economy fully back on track. Biden’s administration views the just-passed major stimulus bill as their opening salvo to get the country back to full employment as soon as possible, and to open up the nation’s schools.

The Biden White House and lawmakers are already starting to sketch out the parameters of what will come next in the president’s Build Back Better agenda, which will likely include a green infrastructure package among many other items.

But until then, they will be focused on vaccinating millions more Americans.

“We’ve made so much progress,” Biden said. “This is not the time to let up.”

Most teachers spend their own money on their classrooms. 7 educators explain.
Democrats gear up for a fight over the next head of the CFPB
State data indicates we’re headed for another record unemployment week
Teens are calling themselves “ugly” on TikTok. It’s not as depressing as you think.
The $1.3 billion lawsuit that could bring down Rudy Giuliani, explained
Mitt Romney is now just like every other Republican: he’s with Trump for the tax cuts