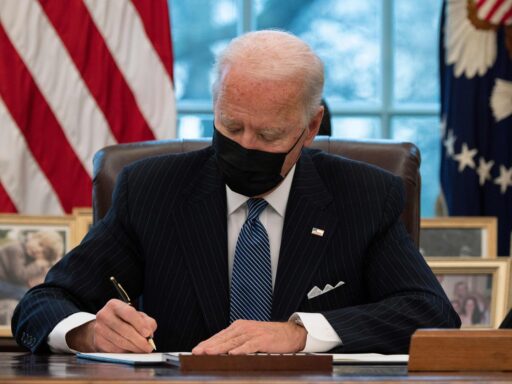 The president announced the move along with other actions to boost vaccines.

According to senior administration officials, Biden will announce three major actions. First, the administration will increase vaccine supply to states to at least 10 million a week, up from 8.6 million, starting next week. The Department of Health and Human Services will also start providing estimates to states of how many vaccines they’re going to receive at least three weeks in advance, up from one week. And the feds will purchase 100 million doses of each of the Pfizer and Moderna vaccines, boosting the federal government’s total order from 400 million to 600 million — enough for 300 million Americans.

Officials also referred to other actions the administration is taking, such as using the Defense Production Act to get more syringes that can squeeze one more dose out of vaccines.

Currently, the US is lagging. Former President Donald Trump’s administration promised 20 million vaccinations by the end of 2020, but the US still hasn’t hit that mark more than three weeks into 2021, based on federal data. Problems have cropped up across the US, from supply shortages to wasted doses to long lines. Other countries, including Israel and the UK, have pulled ahead of the US on vaccination rates.

It’s a genuinely life-or-death situation. With the US now averaging more than 3,100 Covid-19 deaths a day, every day or week or month of problems means potentially thousands, if not tens of thousands, more preventable deaths due to the coronavirus. Boosting vaccine efforts by just days, then, can literally save thousands of lives — getting the US closer to a herd immunity threshold that experts say is needed to truly stop outbreaks. And it would get the nation back to a social and economic normal faster, too.

For Biden, it’s also a massive political challenge. His handling of the Covid-19 pandemic, along with the economic recovery, is likely how his presidency will be judged. If he fails, Americans will suffer, and they may not think fondly of the administration that let them down.

Biden is trying to confront that reality, and his latest actions chip away at the problem. But, as his administration has acknowledged, more action will be needed in the coming weeks to fully address what’s going wrong.

More federal support is key to smoothing out problems

Biden’s answer to Covid-19 and vaccination efforts is, in some ways, simple: more federal support.

If you look at what’s going wrong with vaccines in the US, it can seem like a bunch of different issues from place to place. But many of these issues are rooted in a lack of federal support for notoriously underresourced public health agencies.

To put it another way: If you asked a bunch of underfunded public health agencies to do a big task in a large, diverse country, then refused more support to help them carry out this task, you would actually expect a lot of different problems to arise by virtue of the country being a big, diverse place. The root problem is a lack of federal support, but how that problem looks in different places will vary widely based on geography, demographics, local and state political environments, and more.

“States aren’t totally off the hook, but what we are seeing is the result of lack of resources and strong guidance (and historical way in which public health is organized and delivered in the US),” Jen Kates, director of global health and HIV policy at the Kaiser Family Foundation, told me.

That helps explain why such a variety of problems have appeared throughout the vaccine effort, from vaccine doses going unused to some equipment breaking down to long lines to insufficient staffing at vaccination sites. These problems are rooted in insufficient resources or guidance; whether one state experiences them while another doesn’t can come down to even hyperlocal variables.

Biden’s announcements on Tuesday chip away at some of these problems. For one, they make it clear that the federal government will supply more vaccine doses — promising to alleviate some of the supply constraints. But they also help states coordinate their efforts: By providing more guidance on how many vaccine doses states can expect to get weeks earlier, state officials can actually plan with those numbers of doses in mind.

But administration officials acknowledged these actions are only a start. They called on Congress to pass Biden’s $1.9 trillion economic relief package, which includes a $400 billion Covid-19 plan and $20 billion for vaccine efforts in particular. That kind of funding, along with the $8 billion Congress approved in December, could go a long way to giving states the resources they need to roll out vaccines.

None of this is particularly groundbreaking. But it’s the kind of thing that the Trump administration resisted doing, as it took a leave-it-to-the-states approach to vaccine distribution and even characterized more support to the states as a federal “invasion.”

Biden has promised a much more involved federal approach. Tuesday’s actions are a small part of how that might work in practice.

This week in TikTok: The only election that mattered
Why the Trump campaign is going all-in on YouTube
Inside the fight to “defund” the NYPD
Michael Cohen wants to scrap the Stormy Daniels NDA
How teachers unions can survive
VMAs 2018: 6 winners and 2 losers from a mostly lackluster show