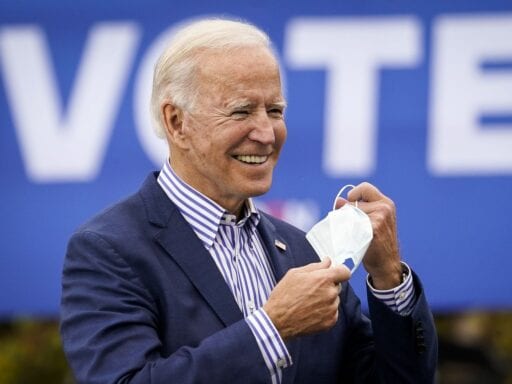 He’s leading or tied with Trump in Florida, Georgia, North Carolina, and Texas, all states in a GOP-leaning region.

A set of new polls show Democratic presidential nominee Joe Biden with a narrow lead — or a tie — with President Donald Trump in the Southern states of Florida, Georgia, North Carolina, and Texas, a potentially promising sign for Biden’s odds of winning the White House.

In this election cycle, political analysts consider Florida and North Carolina to be swing states — and Texas and Georgia to be possible swing states, as well. Considering that Trump won all of them in 2016 — including outstripping Democratic nominee Hillary Clinton in Texas by 9 percentage points — the new polling speaks to the president’s vulnerabilities as Election Day swiftly approaches.

The results are close enough that Trump could regain his advantage ahead of November 3, but it is striking to see Biden performing so well in states that Trump easily won before, and to see a Democratic candidate putting up big numbers in a region that has skewed Republican for decades.

Most worryingly for Trump, perhaps is that Biden garners more trust from voters on the top tier issue of handling the coronavirus pandemic. In Florida, Biden leads Trump 49 to 41 percent on the issue; in North Carolina he leads 50 to 39 percent; and in Georgia 48 to 41 percent.

CNN’s polling expert Harry Enten has argued this is bad news for Trump, since historical polling data suggests that in elections where there’s an issue that surpasses the economy in attention, then “whoever is most trusted most on the non-economic issue is likely to win the election.” And as Vox’s Roge Karma has written, while polls show the pandemic isn’t necessarily the top issue for Trump voters, surveys have found it is a key issue for the undecided voters who could swing all three states either toward Trump or Biden.

In Texas, things are looking up for Biden as well. A new Dallas Morning News/University of Texas at Tyler poll shows Biden edging out Trump 48 to 45 percent among likely voters.

Mark Owens, the political scientist at UT-Tyler who directed the poll, told the Dallas Morning News that he considered Texas a “tossup” because of shifting attitudes toward Trump. The Cook Political Report has rated the race “Lean Republican.”

The number of Texas voters concerned with how Trump has handled the coronavirus appears to be growing, Owens found. In September, 32 percent of Texans said they had no confidence in Trump to keep communities safe from the pandemic — but in the latest poll, that number surged to 44 percent.

Most Texans preferred Trump over Biden on the economy, with 53 percent of likely voters saying they thought Trump would handle it better, and 46 percent feeling the same about Biden.

State polling should be taken with a grain of salt

Polling in battleground states is important — particularly given that the US’s presidential elections are determined by the electoral college, not a popular vote. And together, Florida, Georgia, North Carolina, and Texas account for 98 of the 270 electoral college votes a candidate needs to win the White House.

But state polling also has significant limitations, and Biden’s standing in these states (as well as other more closely-watched swing states like Michigan and Pennsylvania) should not be seen as a surefire sign of his victory in the overall election.

Consider that a Marquette Law School poll in Wisconsin conducted in October 2016 had Clinton up by 6 percentage points — but that Trump ultimately won the state by 0.7 points.

As Vox’s Li Zhou has explained, there are many reasons that a number of state polls were off the mark in 2016 compared to the final election results. Some of those have been corrected for during this election cycle — for instance, in the run-up to 2016, some polls overrepresented Clinton voters because they failed to account for differences in education level, and that’s largely no longer the case: Both the CBS News and Dallas Morning News polls were weighted by education, for example.

But there are still plenty of obstacles. Polling is always a snapshot of a specific time and group of voters, and ultimately can’t give definitive insight into the likelihood that someone sharing their preference with a pollster will actually show up at the voting booth on Election Day. It also can’t necessarily predict the patterns of late-breaking voters who decide on their candidate in the final days before election (something that played a crucial role in Trump’s victory).

Adding to the uncertainty is that the pandemic makes predictions based on polling especially difficult, as Zhou explains:

Specifically, the use of vote-by-mail due to the coronavirus pandemic makes predicting the composition of the electorate that much harder. It’s unclear how closely turnout will match up with prior years because of public health concerns about physical polling places and questions around the number of people who’ll use mail-in ballots instead.

“It’s difficult to do a turnout model because you’re not sure who’s going to turn out. That’s going to be even harder in an election that has extensive vote-by-mail,” says University of New Mexico political science professor Lonna Atkeson.

Bottom line: this Southern swing state polling is promising for Biden, but polls are not to be confused with perfect predictions of outcome.

Trump and Biden will hold dueling town halls instead of a debate this Thursday
How Netflix’s new mafia documentary failed
House GOP delays their much-anticipated “compromise” immigration bill vote
Can you hear these silent GIFs? You may have a new form of synesthesia.
How 2020 Democratic presidential hopefuls want to help communities vulnerable to climate change
7 restaurant workers on how their lives have been changed by the coronavirus