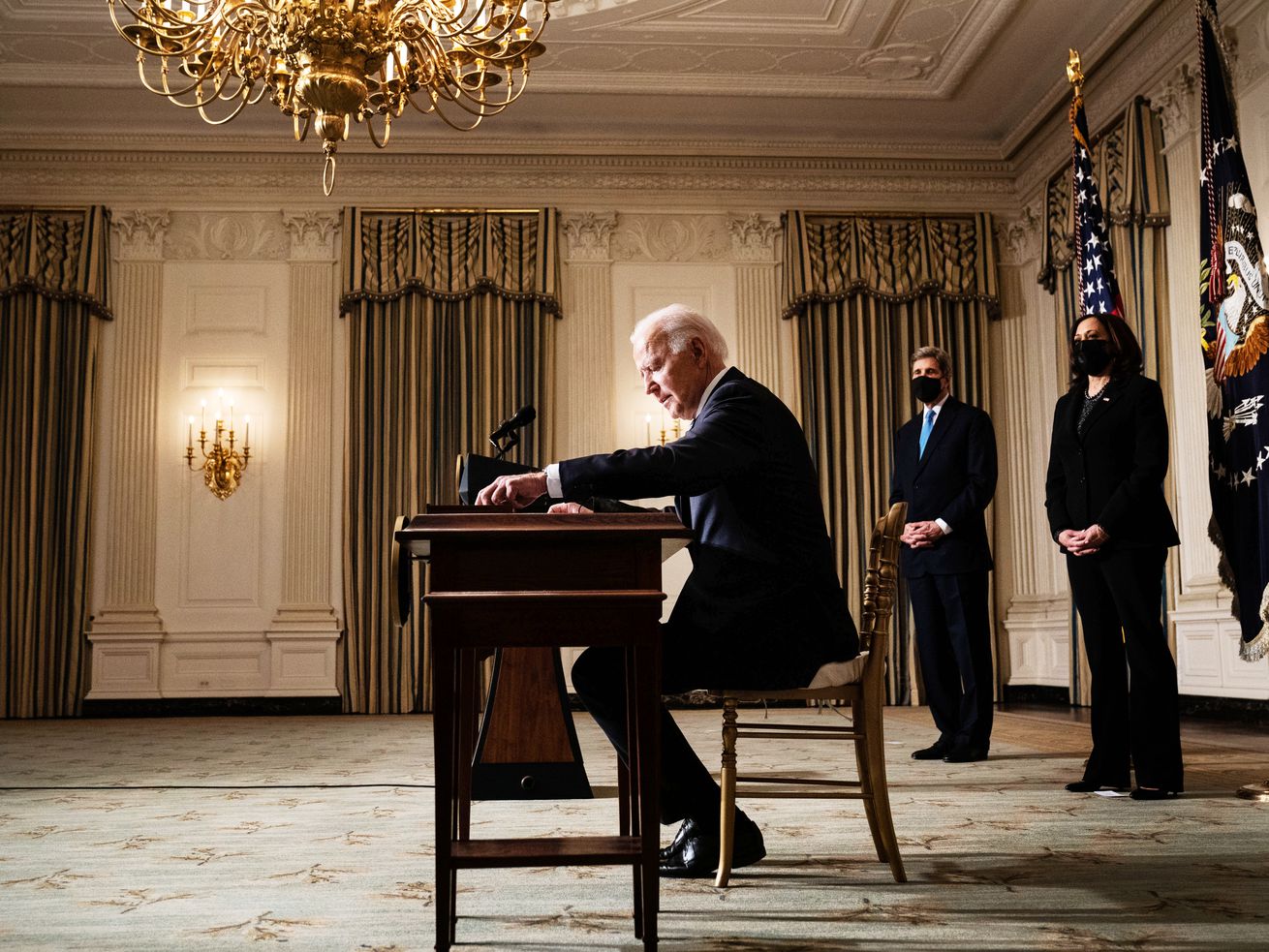 Here’s how he can start with three of the worst ones.

The Trump presidency is over, but his damaging environmental rollbacks remain — for now.

In an avalanche of executive actions over the past two weeks, Biden took aim at Trump’s anti-environmental legacy, kicking off the process of repealing and replacing regulations to pursue his ambitious climate goals.

But Biden can’t just sign his way back to Obama-era environmental regulations, or instantaneously create even stricter ones to limit greenhouse gas emissions and pollution. To overturn Trump’s regulations, he will have to initiate new rulemaking processes — just as Trump did to undermine Obama’s legacy. Depending on the complexity and contentiousness of the proposed regulations, this could take several years.

Meanwhile, every day that Trump’s standards remain in place, a dangerous quantity of new emissions is added to the atmosphere, accelerating the climate emergency. In 2018, the Intergovernmental Panel on Climate Change warned that emissions must be cut 50 percent by 2030 to retain any hope of keeping the world’s temperature rise from surpassing 1.5 degrees Celsius above pre-industrial levels, after which climate impacts become even more severe. Yet rather than making it harder for industries to burn more fossil fuels and hit this target, Trump spent his entire presidency making it easier for them.

How quickly the Biden administration can rewrite Trump’s rules is particularly critical for three main areas of regulations: standards for vehicle fuel efficiency, methane emissions for oil and gas operations, and carbon emissions from electricity generation. According to an analysis from the research firm Rhodium Group, Trump’s weakening of Obama-era regulations on these three issues has done the most climate damage while also increasing air pollution, which disproportionately impacts communities of color.

“With the benefit of hindsight, we don’t have the luxury to try one thing and then try another in sequence,” said David Doniger, senior strategic director of climate and energy at the Natural Resources Defense Council. ”We are looking for the Biden administration to press on all the buttons at one time.”

Here is a guide to what ambitious new policies on these critical climate issues might look like — and how quickly they can be put in place.

Of Trump’s environmental rollbacks, gas mileage standards pose the greatest climate threat. Obama had set in place regulations requiring automakers to hit 54.5 miles per gallon by 2025, but Trump’s replacement regulation would only have US cars reaching 40 miles per gallon. While rolling back national vehicle emissions standards, Trump also revoked California’s longstanding authority to set its own emissions standards higher.

By slashing Obama’s federal emission standards, 453 million metric tons of carbon dioxide equivalent will be added to the atmosphere by 2035, according to the Rhodium Group — that’s the equivalent of the emissions from nearly 100 million cars being driven for a year. The impact of removing California’s waiver to set its own emissions framework is less clear. California and other states that follow its standards are still in a legal battle to retain their higher standards. And, further defying the Trump administration, California brokered a legally binding deal with five automakers last summer to lower emissions.

Keeping Trump’s rules “would represent a massive slowdown in electric vehicle investment and electric vehicle deployment,” said Nic Lutsey, the US director of the International Council on Clean Transportation.

Biden has been quick to tackle this barrier to his climate agenda. On his first day in office, he called for Trump’s fuel efficiency standards — the SAFE rule — to be reviewed in his executive order on climate change. Last Wednesday, in a speech on climate change, he said, “The Biden-Harris administration will not only bring [Obama’s] standards back, we’ll set new, ambitious ones that our workers are ready to meet.”

The Environmental Protection Agency has asked the Department of Justice for abeyances, essentially pausing litigation that began under the Trump administration, including against Trump’s vehicle emissions rollbacks. So the next step is for the Biden administration to draft new rules, and once those new regulations are in place, the EPA can request that the cases be dismissed, according to Michael Burger, the executive director of Columbia’s Sabin Center for Climate Change Law.

How ambitious will the Biden administration be with the new rules? His campaign set a goal in his climate plan to get to 100 percent zero-emission vehicles, but he didn’t attach a deadline to it. Some environmental advocates have called for that deadline to be 2035.

According to the New York Times, Biden will take a cue from California in setting new standards. Under the deal between California and five automakers, they will increase fuel efficiency standards to 51 miles per gallon by 2026. By April, Biden will propose implementing that standard, the Times reported on Thursday.

At the same time, climate advocates hope that the EPA will also create a new long-term rule to more dramatically reduce emissions and usher in the electric vehicle age. “By far the most important thing for the environment is getting all vehicles on a much stronger path than [Obama’s regulations] for electric vehicles,” said Lutsey. “That is really all about the 2027 to 2035 standards that are much more important in accelerating electric vehicles.”

The administration is likely to face pushback from auto companies that embraced Trump’s lower standards, but many of the top companies are moving quickly to get behind electric vehicles. Just last week, General Motors made perhaps the biggest show of support yet of any automaker for a gasoline-free future, announcing that it would aim to only sell zero-emission vehicles by 2035.

Putting a lid on methane leaks

Next to slashing car fuel economy standards, Trump’s weakening of methane regulations was one of his biggest contributions to global warming. Methane leaking from oil and gas operations is a huge contributor to planetary warming. The gas is more short-lived than carbon dioxide in the atmosphere, but over 20 years, it is 85 times as powerful.

Methane emissions from the oil and gas sector were regulated for the first time in 2016 when the Obama administration started requiring companies to monitor and prevent leaks in new facilities. But under Trump, the EPA replaced those regulations last summer, in effect limiting the parts of the oil and gas supply chain that are regulated (transmission and storage are no longer subject to regulation, according to E&E News).

These changes amount to a whole lot more methane leaking into the atmosphere. According to the Rhodium Group, 592 million metric tons of carbon dioxide equivalent in emissions will be added to the atmospheric total, compared to the alternate universe in which Obama regulations were still in place.

Along with fuel efficiency standards, Biden targeted these weakened regulations on his first day in office in an executive order, calling for them to be reviewed and setting a September deadline for new rules to be proposed.

These early actions are “as strong of an indication as you can get that this is a tier-one priority for the administration,” said Matt Watson, the vice president for energy at the Environmental Defense Fund.

Biden is not only expected to upgrade the Obama standards for new oil and gas facilities but also follow up where he left off, establishing standards for existing operations.

”Reducing oil and gas methane is one of the fastest, most cost-effective things you can do to immediately slow the rate of warming,” said Watson. If new rules are proposed by September, Watson said they could be finalized next year.

The industry is showing signs that it is willing to accept more scrutiny of its methane emissions. After Trump’s rollback, BP and Exxon actually called for tougher rules, which experts said reflected the pressure they are getting from investors to decrease emissions, and the cost-effectiveness of reducing methane leaks. After Biden’s executive order, the American Petroleum Institute offered its support for new regulations, a move that Watson called an unconvincing “deathbed conversion” because the organization has historically fought regulations.

One of the biggest blows to Obama’s climate legacy was Trump’s repeal and replacement of the Clean Power Plan — the previous administration’s effort, under the Clean Air Act, to decrease emissions in the electricity sector 32 percent from 2005 levels by 2030.

The emissions impact of the rule change is harder to estimate because of the numerous ways the Obama and Trump replacement plans could have been implemented, but the Rhodium Group projected the added emissions could rival the previous two regulatory rollbacks.

But Trump’s regulations did not even outlast his time in office. The Washington, DC circuit court delivered good news for Biden during Trump’s final week in office — it struck down the Affordable Clean Energy rule, his replacement to the Clean Power Plan.

This clears the way for the EPA to attempt to construct new, even stricter regulations for the power sector — the nation’s second-biggest source of emissions — than what the Clean Power Plan called for.

“I do not expect that the administration is going to seek to simply reinstate the Clean Power Plan,” said Burger.

That’s because returning to the Obama standards wouldn’t be sufficiently ambitious given how quickly renewable energy costs have fallen, said Doniger of NRDC. (Disclosure: The author worked as a research fellow for NRDC in Beijing from 2016 to 2017.) “We can do more and we should revise and strengthen the Clean Power Plan,” he said.

Biden has set a bold goal of generating all of the nation’s electricity from net-zero emissions by 2035, but how he will move forward with regulations remains unclear.

An analysis conducted by NRDC and ICF in 2018 found that power plant emissions could be reduced by 60 percent for 2030, at a lower cost than was projected for the original Clean Power Plan. At the same time, up to 5,200 premature deaths from air pollution would be avoided in 2030. (And the analysis was done using the EPA’s own methodology.)

On whether new regulations might once again face industry opposition and legal challenges, Doniger said, “I’m sure it’s going to be a pitched battle.” He added that the proportion of utilities fighting the transition to clean energy is dropping; however, a recent report from the Sierra Club shows that most utilities are not living up to their green commitments either.

THREAD: Electric utilities are greenwashing their climate commitments and it’s ruining our chances of hitting 1.5C. Co-authors @leahstokes Cara Bottorff and I investigated the data that @SierraClub has been tracking as advocates for many years https://t.co/yxs1YWrG6R

What to watch for

Over the coming months, the EPA and other agencies will start to fill in the details for Biden’s new set of regulations. “Even though it’s an ambitious undertaking to write any of these rules, it will not take a competent EPA as long to rebuild them,” said Doniger.

Some key questions will be how much the various industries will try to hold back the regulation process, whether Congress will pass new legislation that supplements the regulations, and how the courts will respond.

As the regulations take shape and battle lines are drawn, here are a couple of resources to track the progress of “re-regulation” and any related lawsuits:

To beat Trump, try running an outsider
Aimee Stephens brought a trans rights case to the Supreme Court. She may not live to see the decisio...
The case for a Native American secretary of the interior
We asked Joe Biden’s campaign 6 key questions about his climate change plans
A 7.0 earthquake struck near Greece and Turkey, killing at least 14 and injuring hundreds
Poland had some of the strictest abortion laws in Europe. They just got even stricter.