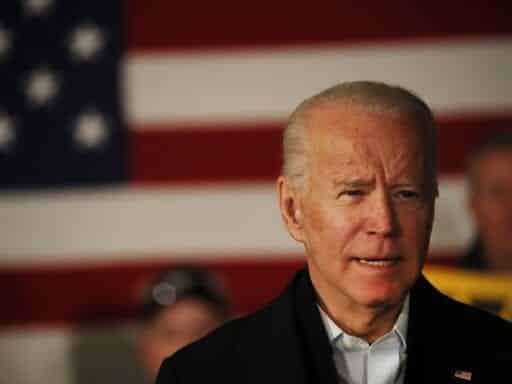 If Sanders leads in delegates but doesn’t have a majority, Biden said he’ll fight for the nomination.

Coming off a resounding victory in South Carolina, former Vice President Joe Biden addressed the possibility of a contested convention, sending a clear message to Vermont Sen. Bernie Sanders, who currently leads in the delegate count, and who has argued a candidate ought to only need a plurality — not a majority, as party rules dictate — of pledged delegates to become the nominee.

Speaking on CNN’s State of the Union on Sunday, Biden said that he would fight for the presidential nomination at the Democratic National Convention in Milwaukee in July if Sanders leads in the delegate count but does not have at least 1,991 pledged delegates, a number that constitutes a majority.

“The rules have been set,” Biden said. “You don’t change the rules in the middle of the game.”

With analysts beginning to argue that it is unlikely any candidate will have a majority of delegates before the convention, Sanders has begun to challenge these rules.

At a CNN town hall in late February, for instance, Sanders said, “If I or anybody else goes into the Democratic convention with a substantial plurality, I believe that individual, me or anyone else, should be the candidate of the Democratic Party.”

And during an appearance on ABC’s This Week Sunday, Sanders said, “If we go into Milwaukee, into the Democratic Convention, with a lead, having won many, many states, having won the people’s vote, and that is reversed at the convention, how do you think people all over this country will feel?”

Bernie Sanders: “If you reject the candidate who has the most votes from the people and you win it through superdelegates … do you think you’re going to have the energy … and the grassroots movement to defeat (Trump)? I honestly don’t think you will.” https://t.co/wGwD0uWZ3e pic.twitter.com/gcMbyNQIIZ

Should a candidate fail to come to the convention with a majority of delegates, current rules stipulate that party leaders — also known as superdelegates — weigh in to help decide the nominee. Sunday, Sanders also argued a candidate selected in part by superdelegates would be ill equipped to defeat President Donald Trump.

“If you reject the candidate who has the most votes from the people, and you win it through superdelegates,” Sanders said. “Do you think you’re going to have the energy and the excitement and the grassroots movement to defeat Donald Trump? I honestly don’t think you will.”

With his South Carolina victory, Biden was able to narrow the delegate gap between himself and Sanders. Biden currently holds 53 delegates, to Sanders’s 58.

Should such a dynamic hold until July, and should both Sanders and Biden fail to meet the 1,991 pledged delegate threshold, Democrats will have to decide whether to pursue the method Biden has advocated for or the one Sanders has suggested.

It is not yet clear what party leaders would do if faced with such a situation, but in February, Democratic National Committee Chairman Tom Perez told MSNBC in his view a candidate needs a majority, whether it is gained though pledged delegates in the primary or through a vote with superdelegate: “Forty percent at the end of the day, is not enough,” Perez said.

As Vox’s Andrew Prokop has written, the fight for delegates isn’t simply a question of winning states (which Sanders has repeatedly done), but also of picking up a more significant share of votes (which is how Biden, even with dismal showings in Iowa and New Hampshire, holds the second-highest number of delegates).

For instance, if the leading candidate gets 30 percent of the vote somewhere, they could end up getting around one-third of delegates at stake. But with the exact same vote share, they could also end up with two-thirds of delegates — a dramatic difference, particularly since a majority is necessary to win.

The difference depends entirely on how many other candidates top 15 percent and on how far above it they are. Voters may not realize that if they cast their ballot for a candidate who ends up falling below that threshold, they could be supercharging the leading candidate’s delegate haul.

This can all translate into “quirky results,” as Prokop has written, in such a crowded field: thanks to how proportions of votes are rounded, a candidate towards the middle of the field may end up picking up a handful of delegates here and there — enough to cut into a frontrunner’s lead.

That’s part of reason the majority versus plurality question is being raised now. There are only 3,979 pledged delegates to go around, and the fact that there are still seven people competing for them makes it all the more likely no one candidate will win a majority.

This is a time for solidarity
Lonely Island’s Palm Springs is a funny existential comedy about 2 dirtbags who find each other
America is stepping down as a global leader on refugees
World Cup shootouts: why the team that goes first usually wins
Trump officials are resigning over the US Capitol siege
Judge orders Johnson & Johnson to pay $570 million for role in Oklahoma’s opioid epidemic