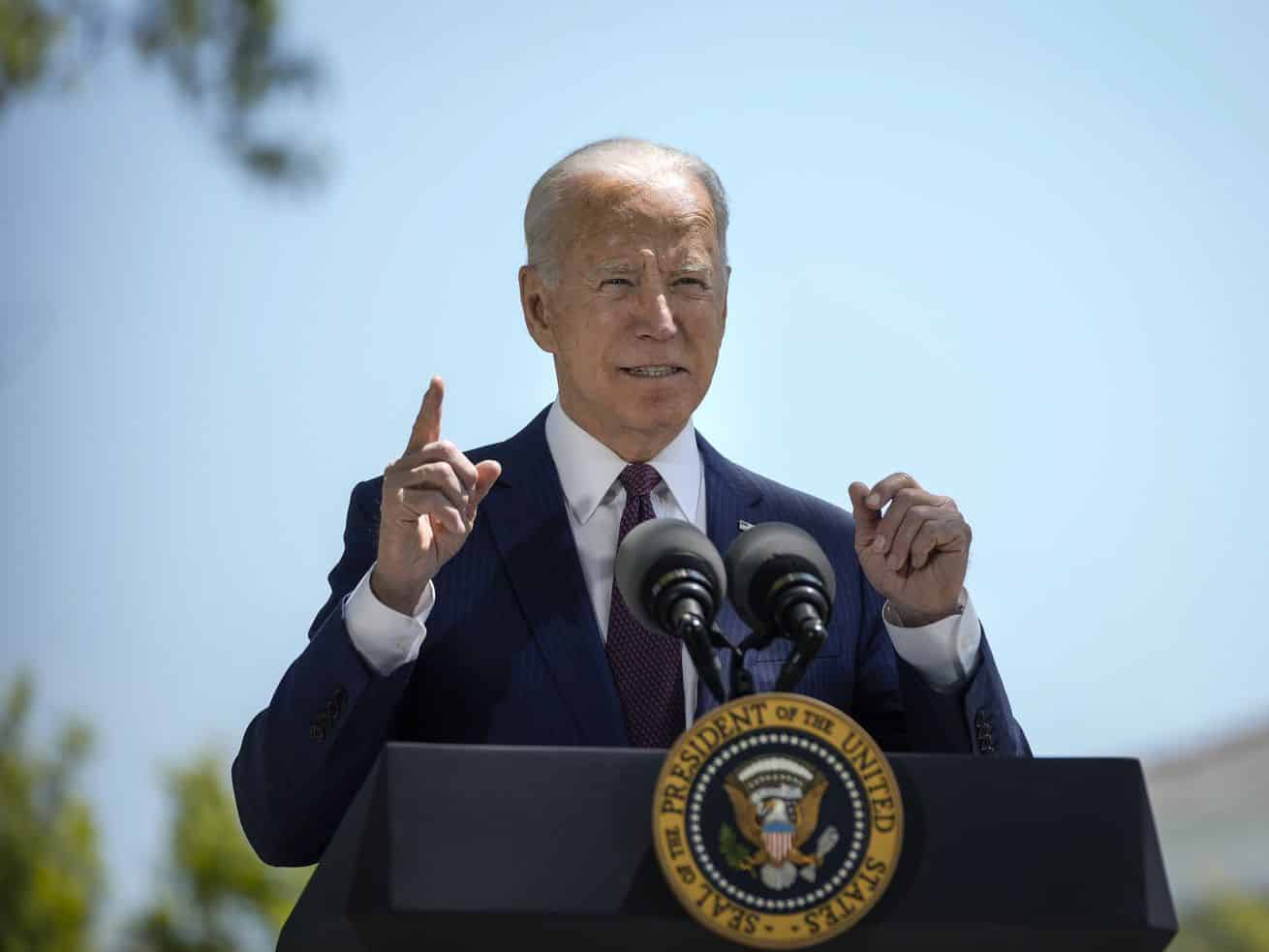 Biden’s new plan would be life-changing for many American families. Can it pass?

President Joe Biden on Wednesday proposed a $1.8 trillion package that, if passed, would be the largest American investment in child care, paid leave, and early education in recent history — if not ever.

The American Families Plan would work with states to incentivize universal preschool for all 3- and 4-year-olds in the nation, provide two years of free community college to those who want it, make child care more affordable for low- and middle-income families, create a new national program for family and medical leave, and expand the maximum Pell Grant for college by about 20 percent. The plan also provides $800 billion worth of tax relief for families with children: It extends the expanded child tax credit from Biden’s Covid relief package until 2025, and permanently expands Affordable Care Act tax credits to lower health insurance costs for millions of Americans, among other things.

Biden’s plan would make a huge dent in inequality — in a country that currently provides very little government support for American families. The United States stands alone among developed countries in failing to mandate paid leave for new parents, or paid family medical leave. And many other high-income countries subsidize child care and preschool.

Analysis shows the expanded child tax credit alone will cut US child poverty in half, and the expanded child care in Biden’s plan will be welcome for parents — particularly mothers — who have spent the past year attempting to juggle work and caring for children. A recent Washington Post/ABC News poll found that 25 percent of women and 27 percent of workers of color said their family’s financial situation is worse off today than it was before March 2020, when pandemic shutdowns went into effect.

Biden will formally introduce his plan on Wednesday night, during his first speech before a joint session of Congress. There, he’ll also unveil pay-fors for the plan, new tax increases on America’s wealthy, and funding for tax enforcement the administration says will fully pay for these investments in 15 years.

Specifically, the Biden administration is asking Congress to raise taxes on the nation’s wealthiest 1 percent of individuals by returning the top individual income tax rate to 39.6 percent — a reversal of the GOP’s 2017 tax cuts. Administration officials repeatedly underscored that anyone making less than $400,000 per year would be excluded from higher taxes. The tax plan also includes new measures to beef up IRS enforcement to ensure wealthy people who skirt paying their taxes have to pay up.

Child care and paid leave advocates say these investments are important because American parents and other caregivers — the majority of them women — can’t work without them.

“This isn’t just a ‘nice to have,’” Vicki Shabo, senior fellow for paid leave policy and strategy at New America, told Vox. “This is a core economic issue for the country.”

Now, however, it will be up to the Biden administration to take that message to Congress — where multibillion-dollar spending on child care and early education may be a harder sell than roads and bridges. Conservatives have opposed federal funding for child care for decades, arguing that it would threaten American families, and the provisions in the American Families Plan are unlikely to attract Republican support.

There are a lot of details still to be worked out, but many care advocates believe their time is now. The pandemic has shown that “everybody is vulnerable in some way when a serious personal health or caregiving issue strikes,” Shabo said. “All of these issues have become much more relatable as people across region, across family situation, across income, have struggled in one way or another with this really unprecedented moment.”

What’s in the American Families Plan

Biden’s latest plan is the second of his two-plank vision for economic recovery. While the American Jobs Plan focused on building roads and schools, investing in green energy, and supplementing long-term care for older adults and those with disabilities, this twin plan invests in the “human infrastructure” that makes the economy function.

Broadly, the American Families Plan is focused on bringing down the high costs of raising children, attending school and pursuing higher education, and getting health insurance. The plan also contains a number of provisions on nutrition and healthy school means.

To pay for all of this, Biden is proposing:

Some details of this plan may not make it into a final bill when Congress begins drafting. But it shows that the administration is planting its flag on big investments in America’s middle and lower classes — and thinks the upper class should pay for it.

Biden is prioritizing the care economy

The American Families Plan builds on a commitment Biden made on the campaign trail: to take an inclusive view of the country’s economic success that encompassed not just the kinds of manufacturing jobs emphasized by past administrations but also jobs in fields like child care and elder care. These jobs are often done by women, especially women of color, and, since women shoulder the majority of caregiving responsibilities within families, supporting caregiving jobs allows more women to enter the labor force as well.

“When we usually talk about jobs packages, there is a big push on shovel-ready jobs,” Biden said in a speech last July. “But that’s what care jobs are. … The workers are ready now. These jobs can be filled now. Allowing millions of people, primarily women, to get back to work now.”

The first part of the president’s infrastructure package, released in March, included some money for care jobs — namely, $400 billion for home- and community-based health and elder care. But the bulk of the president’s care-economy agenda is contained in the American Families Plan.

The proposed investments have the potential to transform the lives of workers in caregiving jobs and of families who need care. On paid leave, for example, the plan would close a gaping hole in the American social safety net. Before the pandemic, just 20 percent of American private sector workers — and just 8 percent of workers in the bottom quartile of low-wage workers — had access to paid leave to care for a new child or family member, according to the Center for American Progress.

“The lack of access to paid leave in this country keeps women out of the workforce, depresses women’s wages, and means that family members who need care from a family member often can’t get it.” Shabo explained. Meanwhile, “people who have a serious health issue often have to go to work or take unpaid leave,” the latter of which can push them into poverty.

Though many college-educated workers already have paid leave benefits as part of their employment package, the vast majority of workers do not. One estimate put the total of employees who had access to paid family leave at just 13 percent. The American Families Plan would change that, allowing American workers to take paid time to care for a child or recover from an illness, and still return to their jobs.

The plan also has the potential to remake America’s patchwork child care system. Child care in many states currently costs more than tuition at a public university, yet workers in the industry make poverty-level wages, around $11 an hour. The American Rescue Plan, the Covid-19 stimulus bill signed in March, contained $39 billion to help the child care industry weather the immediate challenge of the pandemic, but it wasn’t enough to fundamentally change the system for the future. Funding at the level of the American Families Plan, however, “sends a signal to states and to the field that this is an intended long-term investment,” Rhian Allvin, CEO of the National Association for the Education of Young Children, told Vox.

Indeed, the plan would ensure that families making under 1.5 times a state’s median income pay no more than 7 percent of their income on child care, while the lowest-income families would pay nothing. Meanwhile, it would raise wages for child care workers to $15 an hour, or to parity with kindergarten teachers if workers have similar qualifications.

That’s one of the many reasons experts say it makes sense to think about caregiving as part of any economic or infrastructure plan. “Without a robust care infrastructure, we’re essentially choosing to bench half our labor market,” Rakeen Mabud, managing director of policy and research and chief economist at Groundwork Collaborative, told Vox.

Some advocates are concerned that the American Families Plan could be less politically palatable to conservatives and moderates in Congress than the infrastructure-focused American Jobs Plan.

It’s yet to be seen whether Democrats will attempt to pass these packages piecemeal or roll them up into one giant piece of budget reconciliation legislation that could be passed with Republican support. Democrats passed Biden’s $1.9 trillion Covid relief plan with budget reconciliation and are considering the same with infrastructure.

Either way, the child care and paid leave portions of the president’s agenda could fall by the wayside in congressional negotiations, whether it’s because moderates will object to lumping everything together or because they don’t want to vote for a third package that adds another nearly $2 trillion in spending.

“Getting the infrastructure provisions done is going to be hard enough, because Republicans may not want to play ball,” Jim Manley, who was an aide to then-Senate Majority Leader Harry M. Reid (D-NV), told the Washington Post. “But getting the other domestic spending plans over the finish line is going to be a heck of a lot tougher.”

Some fear that by splitting up the plans, the White House might have increased the likelihood that child care and other centerpieces of the second plan get left behind, especially since long-term care made it into the American Jobs Plan. Rep. Katie Porter (D-CA) expressed concern at a summit in March that a point could come when “golly gee, there’s no money left to help make it possible for women to recover economically.”

After a recent ruling from Senate Parliamentarian Elizabeth MacDonough, Democrats can pass two more budget reconciliation packages this fiscal year. However, this strategy is unprecedented and relatively untested, and is likely to prompt a negative reaction from Senate institutionalists.

Progressives like Sen. Elizabeth Warren (D-MA) say they want to keep infrastructure and child care in one large package.

Trump’s refusal to wear a face mask is a catastrophe
Report: Microwave weapons may be behind mysterious illness afflicting US officials abroad
Val Demings’s tenure as Orlando’s police chief complicates her consideration for VP
“Give me a fucking break”: What Melania Trump said about the blowback against family separations
A new, big review of the evidence found that Alcoholics Anonymous works — for some
NPR’s sanitizing of Trump’s Milwaukee rally shows how he’s broken the media