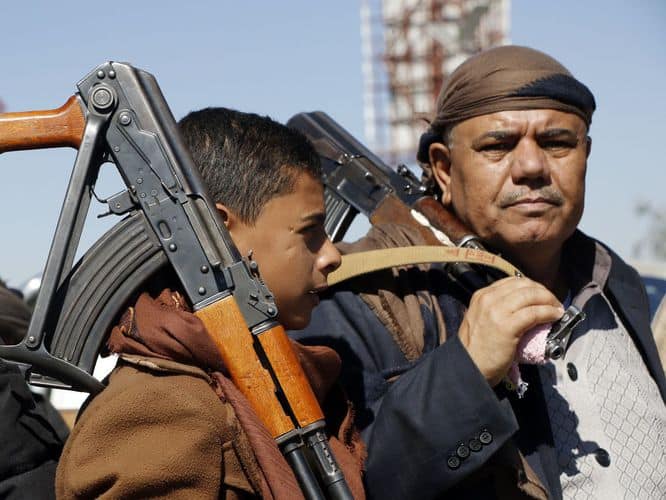 The Biden administration plans to remove Yemen’s Houthi rebels from the Foreign Terrorist Organizations list as soon as Friday, reversing a last-minute move by the Trump administration and reinforcing President Joe Biden’s new approach to the conflict in Yemen.

In mid-January, just days before Biden would be sworn into office, then-Secretary of State Mike Pompeo announced President Trump’s intent to designate the Iran-backed Houthi movement in Yemen as a “foreign terrorist organization.”

The Houthis, formally known as Ansar Allah, are an armed rebel group of Zaydi Shia (a minority sect within Shia Islam) who have been fighting a civil war against Yemen’s Saudi-backed government since 2014. That civil war morphed into an international one in March 2015, when Saudi Arabia and several of its allies in the Gulf decided to intervene militarily in the civil war, waging war against the Houthis. Meanwhile, Iran, Saudi Arabia’s regional foe, has backed the Houthis.

Critics said the move was an attempt by Pompeo to both hurt Iran by punishing one of its proxies and box in the incoming Biden administration as he headed out the door, but Pompeo seems to truly believe the decision was the right one.

Pompeo’s hopes are about to be dashed.

NEW: The Biden administration will announce the revocation of the FTO designation on the Houthis today, per two sources.

Reverses a last minute Trump admin move and could make it easier for humanitarian aid to reach the most vulnerable.

According to three people familiar with the decision, the Biden administration will revoke the foreign terrorist organization designation — known as a FTO — from the rebel group as part of its new strategy to handle the Yemen war. Two of the sources said the State Department had formally notified Congress of its decision.

During a Thursday speech, President Joe Biden said the US would seek an elusive diplomatic settlement to the conflict, which would require the Houthis to strike a deal with Saudi Arabia, regional players, and possibly the US.

The Biden administration then moved quickly to revoke the FTO label: It’d be bad politics for the US to negotiate with a terrorist group.

But there’s another reason to do so, too: It could help Yemen’s most vulnerable. The war has killed about 233,000 people, mostly from indirect causes such as lack of food, water, and health services, while another roughly 24 million Yemenis require assistance to stay alive and fend off diseases like cholera.

Trump’s labeling of the Houthi rebels as terrorists made providing that assistance harder. Simply put, for aid groups to deliver assistance, they would have to negotiate with Houthi members who control a lot of Yemen’s territory. But US law essentially says no aid organization can do deals with terrorists, even if it’s to provide life-saving support to those in need

There’s a workaround if the US provides waivers to certain aid teams, but the Trump administration rushed its decision before working on and implementing an effective plan.

With the FTO designation lifted and the Houthis off the State Department’s list, non-governmental organizations can resume their operations with little impediment.

“This decision has nothing to do with our view of the Houthis and their reprehensible conduct, including attacks against civilians and the kidnapping of American citizens,” a State Department official told me on the condition of anonymity.

“Our action is due entirely to the humanitarian consequences of this last-minute designation from the prior administration, which the United Nations and humanitarian organizations have since made clear would accelerate the world’s worst humanitarian crisis,” the official said, adding that the US remains committed to protecting Saudi Arabia from further Houthi attacks.

“This purely counterproductive designation had caused months of uncertainty as aid organizations, banks, and importers of critical commodities like food and fuel were left in limbo,” said Scott Paul, Oxfam America’s policy advocacy director. “As the Biden administration has made clear, it is the humanitarian consequences of the designation, not the conduct of the de facto authorities, that warrants this reversal.”

With the new policy, the Biden administration reversed a notable Trump national security decision, put the US on the road to a diplomatic solution in Yemen, and perhaps ensured thousands of Yemenis get the care they need.

It shows how quickly Biden’s team is moving: In just two days, the new administration has sparked a major shift in America’s role in Yemen’s war.

All the movie and TV trailers that aired during the Super Bowl
Tulsi Gabbard just won a delegate. Will she be in the next debate?
Americans are working harder these days. Their paychecks don’t show it.
Who will get the Covid-19 vaccine first? A CDC advisory panel just weighed in.
Uber and Lyft unveiled new subscription plans. But are they really worth the money?
States start to reopen, Oktoberfest canceled: Tuesday’s coronavirus news