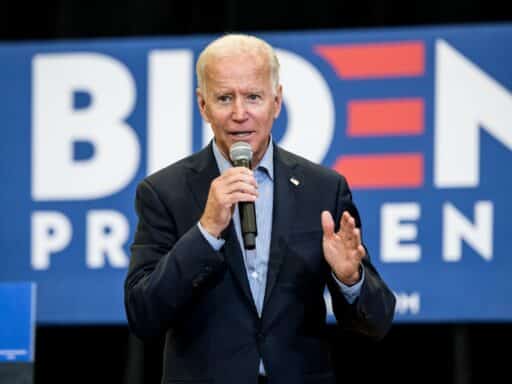 Biden’s economic stimulus proposal is also a big plan to tackle the pandemic.

President-elect Joe Biden unveiled a $1.9 trillion economic relief package on Thursday that also includes something else: a $400 billion Covid-19 plan.

Biden’s plan lays the groundwork to get America through the final stage of the coronavirus crisis. It commits to a “national vaccination program” in which the federal government takes a more hands-on approach than it has so far to getting millions of Americans inoculated. It vows to scale up testing, both to protect people from Covid-19 and to help reopen schools. It seeks to hire 100,000 public health workers, both as a jobs program and a means to handle vaccine outreach, testing, and contact tracing. It pushes emergency paid leave to more Americans so people can stay home and not spread the disease. And more.

It’s a lot, but it’s not exactly groundbreaking. It’s made up of the proposals and ideas that public health officials and experts have been demanding for nearly a year now in response to Covid-19.

What makes the plan striking is that it’s the kind of action that President Donald Trump and his administration never took in response to the pandemic. From the start of the crisis, Trump has repeatedly downplayed the coronavirus — deliberately, supposedly to avoid creating a panic, as he told journalist Bob Woodward. Trump’s administration also took a hands-off approach to the virus that left the bulk of the work, from testing to tracing to vaccination, to the states. That’s led to a perpetually fractured, under-resourced response across the US.

The numbers show the dismal results. The US’s Covid-19 death toll is among the worst in the world, with the country now approaching a total of 400,000 dead. When controlling for population, America is in the top 20 percent for Covid-19 deaths per million people, and its death rate is more than twice the median developed nation. If the US had the same death rate as Canada, over 230,000 more Americans would likely be alive today.

Biden can’t fully turn this around; hundreds of thousands are dead. But with the country in the middle of its biggest surge of Covid-19 yet and a messy vaccine rollout, there’s a lot of room to make things better in this last phase of the pandemic. With more than 3,000 people dying of Covid-19 a day in the US, any action has the potential to save thousands of lives.

It’s also a crucial component to Biden’s presidency. His first impression with Americans, during his first 100 days, will come down to how well he does on Covid-19 and vaccination efforts. Biden’s $400 billion plan is a chance to get this right. If he fails, it could taint his presidency, on top of leading to potentially hundreds of thousands more deaths.

What Biden has planned on Covid-19

Biden describes the Covid-19 portion of his economic stimulus as “a whole-of-government COVID-19 response plan that will change the course of the pandemic.” The plan has several steps, which you can read in full at Biden’s website, but here are some of the major pieces:

Much of this matches what public health experts have been calling for since the start of the pandemic, and the kinds of action that Biden promised as he campaigned for president last year.

It comes at a crucial time. If all goes well, America could put the coronavirus behind it by the end of the year through a mass vaccination campaign. But right now, the virus is very much with us, leading to thousands of deaths a day. The question now is how quickly the US can reach the former to quash the latter.

But there are some questions about feasibility.

First: Can all of this actually get done quickly? After such a rough year with Covid-19 in the US, there’s a lot of skepticism among the general public and even experts about America’s ability to deal with a national public health crisis. It’s still debated how much of the country’s failures were rooted in Trump or rooted in other challenges, such as the fractured federalist system of government in the US. Biden has a chance to show how much of a difference true federal leadership can make.

Second: Will Congress approve all of this? The stimulus package is $1.9 trillion, a significant price tag. While Democrats will control both houses of Congress, some of the moderate factions could balk at the high cost. Biden has argued that, given the low cost of borrowing, the risk right now is doing too little rather than too much — a sentiment many economists and public health experts share — but it’s unclear if Congress will actually heed those words.

If Biden pulls this off, though, it could help begin to end one of the deadliest public health crises in the country’s history.

The plan is the kind of initiative Trump should’ve taken, but didn’t

In the background of many of these proposals is a disturbing reality: Much of this could and should have been done last year.

The proposals on Biden’s list aren’t new. Experts have called for expanding testing, preparing for mass vaccination efforts, supporting schools, providing emergency paid leave, and much more in the past year. Biden himself proposed many of these things last March. You can see many of these ideas in article after article in Vox and elsewhere, dating back to early 2020.

The Trump administration declined more aggressive steps, repeatedly taking a stance that it wasn’t the federal government’s proper role to get hands-on with the Covid-19 response. With protective equipment, Trump resisted using the Defense Production Act to get more masks, gloves, and other gear to health care workers. On testing, the Trump administration left the bulk of the task to local, state, and private actors, describing the federal government as merely a “supplier of last resort.” On tracing, the administration never had anything resembling a plan to make sure the country could track down the sick or exposed and help them isolate or quarantine.

This kind of hands-off, leave-it-to-the-states attitude culminated in a messy vaccine rollout. While there are many factors contributing to America’s slow vaccine efforts — including the country’s size, sprawl, and segmented health care system — a key contributor is the lack of federal involvement. In effect, the Trump administration purchased tens of millions of doses of the vaccines, shipped them to the states, and then left the states to figure out the rest.

When asked about the botched vaccine rollout, the Trump administration has stuck to its anti-federalist stance — arguing that it’s on states and localities to figure out how they can vaccinate more people. Brett Giroir, an administration leader on Covid-19 efforts, argued, “The federal government doesn’t invade Texas or Montana and provide shots to people.”

Characterizing greater federal support for Covid-19 efforts as a federal invasion is of course absurd, but it’s emblematic of the Trump administration’s approach to the crisis.

Biden’s big promise on the coronavirus is that he’ll change all of this, getting the feds more involved. A $400 billion national plan is certainly a big step in that direction. Now we’ll see if Congress actually approves the proposal, and whether the federal government really can do what Biden has promised.

Trump vowed to not cut Social Security and Medicare — hours before proposing just that
7 potentially deadly errors the US is making in its coronavirus response
Americans want Covid-19 relief done fast — even if it takes budget reconciliation
China’s draconian response to the new coronavirus, explained by a China expert
A simpler, more useful way to tax carbon
The number of trans state lawmakers nearly doubled Tuesday night