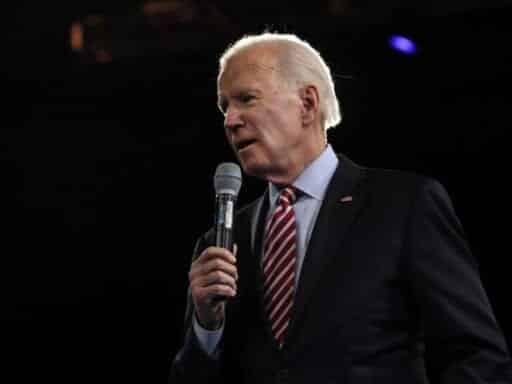 It wasn’t the first time he’s had an odd answer to a woman’s question.

A young female voter asked Joe Biden on Sunday why voters should believe he can win.

His response was rather unusual.

“You’re arguably the candidate with the greatest advantage in this race,” Madison Moore, a college student, said to Biden at a New Hampshire campaign event. “How do you explain the performance in Iowa, and why should the voters believe that you can win the national election?”

After a New Hampshire voter asks @JoeBiden why they should trust he can turn his campaign around, he asks if she’s ever been to a caucus before; when she says yes, Biden snaps: “No you haven’t. You’re a lying dog-faced pony soldier.” pic.twitter.com/3uxOAu0Ues

“Iowa’s a Democratic caucus,” the former vice president responded. “You ever been to a caucus?”

When Moore said she had, he responded, “No you haven’t. You’re a lying dog-faced pony soldier.”

The phrase immediately got attention, with many confused by Biden’s choice of words. As it turns out, “lying dog-faced pony soldier” is a phrase Biden has used before. He attributes it to John Wayne, though its actual provenance is somewhat unclear.

But for Moore, the problem wasn’t so much Biden’s word choice as the fact that he responded to her question by demanding whether she’d ever been to a caucus.

“Joe Biden has been performing incredibly poorly in this race,” Moore told the Washington Post. “His inability to answer a simple question from a nobody college student like me only exacerbates that reality.”

Biden has been criticized in the past for responding to questions — especially questions posed by women — in ways that seem condescending, as when he called moderator Lyz Lenz a “lovely person” after her question at a September LGBTQ rights forum. And the moment in New Hampshire was another reminder that while Biden’s responses may seem folksy or homespun to some, to others they’re a sign that he’s not always treating voters with the seriousness they deserve.

Biden explained the provenance of “lying dog-faced pony soldier” at a North Dakota rally in 2018, saying that his brother loved to use lines from movies.

“There’s a line in a movie, a John Wayne movie, where the Indian chief turns to John Wayne and says, this is a lying dog-faced pony soldier,” Biden said.

It’s not clear if this line actually shows up in any John Wayne movie — as Matthew Dessem points out at Slate, there are 180 to sift through. The general consensus seems to be that Biden is probably thinking of the 1952 Tyrone Power film Pony Soldier, in which a character says, “The pony soldier speaks with a tongue of the snake that rattles.”

Whatever the case, Biden has used the line in the past when responding to questions. At an Iowa event in December, a young voter said that President Obama promised his father that he could keep his existing health plan after the passage of the Affordable Care Act — but, in fact, his dad wasn’t able to do so.

“Were you lying to my dad?” the voter asked.

“A lying dog-faced pony soldier. No,” Biden said, before acknowledging that some people were forced to change plans under the ACA.

When he used the phrase on Sunday, it felt like a bit of a left turn from Moore’s question. She had asked why voters should believe he could win, following his fourth-place finish in Iowa. His response was, apparently, to start explaining caucuses to her, assuming she’d never been to one.

As it happens, he was right — Moore later said in a statement to the Washington Post that she had never been to a caucus.

“I asked Joe Biden a fair question,” she wrote. “His immediate response was to question whether I had ever attended a caucus. In my nervousness in the presence of the former Vice President, I nodded yes.”

Whether she’d personally been to a caucus or not, she told the Post, was irrelevant to her question.

It’s part of a pattern in his interactions with voters

The “lying dog-faced pony soldier” phrase itself was a joke, according to Biden campaign traveling national press secretary Remi Yamamoto.

Like Olivia notes, it’s a joke that was met with…. drumroll… laughter in the room and from the questioner. It’s from a John Wayne movie and he’s made it plenty of times before. Sorry to ruin the fun twitter! https://t.co/XIbn8wF53W https://t.co/5D0Kk06RGK

But it wasn’t the first time Biden has faced scrutiny for his responses to questions.

In June, activist K.C. Cayo asked Biden about his stance on the Hyde Amendment, which bans federal funding for most abortions (though he supported Hyde in the past, Biden now says he backs repeal of the amendment). Cayo, who uses they/them pronouns, and the two women activists with them, also asked Biden to protect sexual assault survivors.

In response, Cayo wrote at Vice, Biden “leaned in very close to my face, and started wagging his finger at me,” saying, “Nobody has spoken about it, done more, or changed more than I have.”

“I wasn’t able to even finish my 30-second elevator pitch — I never got past the first sentence,” Cayo told Vice. “Just the fact that he wagged his finger at me in such a condescending manner is very telling.”

Then, at a forum on LGBTQ issues in September, moderator Lyz Lenz brought up Biden’s votes in favor of “don’t ask, don’t tell” and the Defense of Marriage Act. “You did vote to repeal both of those, but you have also praised Vice President Mike Pence as a ‘decent guy,’” Lenz noted.

Lenz later said that Biden had called her “a real sweetheart” backstage at the event, and that she saw both comments as “a little condescending.”

Biden has also faced questions about his behavior with women in the past, with several saying he kissed or touched them in ways that made them uncomfortable. The former VP has said he will change to match evolving “social norms,” but to some, the way he has spoken to women on the campaign trail is evidence he’s not changing enough.

It’s clear that “lying dog-faced pony soldier” itself was meant as a joke, and that lines like this are part of Biden’s style. Film writer Farran Nehme describes the phrase as “uniquely Uncle Joe.”

Biden’s “Uncle Joe” persona (sometimes, less flatteringly, “Creepy Uncle Joe”) was the subject of jokes during the Obama years. But he’s not the vice president anymore, the older foil to a young commander in chief. Now, Biden is running to be the leader of the country, and young voters are less likely to brush it off when he answers their questions with strange movie references — at 77, he has to prove that he actually understands them and their concerns.

He also has to prove he takes them seriously. The biggest issue with the “pony soldier” comment, for Moore, seems to be the sentiment behind it — that she, a young female voter with a serious question to ask, needed a fairly basic part of the American democratic process explained to her. Whether or not that was Biden’s intent, it was part of a pattern this election cycle, in which some voters — many of them women — have left interactions with him feeling belittled or disrespected.

The bland, boring visuals of the Republican National Convention
Hundreds of families could be deported almost as soon as they’re reunited
Sanders’s top staffers are making a pointed case against Elizabeth Warren
Thursday’s Republican National Convention speakers, explained for people who don’t watch Fox News
Inside the fight to “defund” the NYPD
Games of Thrones’ 8th and final season