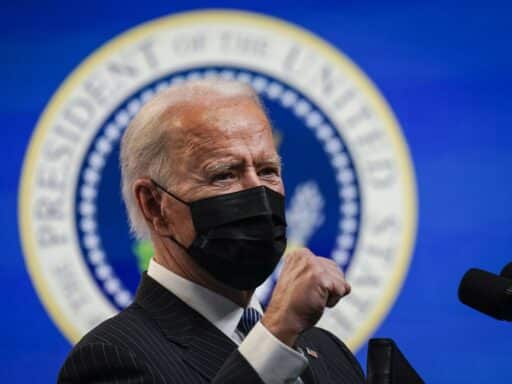 President Joe Biden on Monday raised his Covid-19 vaccination goal to 1.5 million shots a day, up from 100 million in his first 100 days (or 1 million a day), following criticism that the previous goal wasn’t ambitious enough.

Even before Biden took office last Wednesday, his previous goal looked like a done deal — with the country averaging around 900,000 shots a day. Then, over the weekend, the US surpassed 1 million shots a day, before Biden’s policies and executive actions had any time to really sink in.

Even 1.5 million a day, which is enough to fully vaccinate 750,000 Americans with the two-shot vaccines, might not be fast enough for many experts’ goal to complete the bulk of the vaccine campaign by or in the summer.

According to experts, about 70 to 80 percent of the country, and possibly more, must be vaccinated to reach herd immunity and sufficient population protection. That means 245 million Americans likely have to be vaccinated, with 19 million already getting at least their first doses.

At a rate of 1 million shots a day, the US may not hit herd immunity until as late as next year. At 1.5 million, the campaign could drag into the fall and possibly winter.

Peter Hotez, an infectious disease and vaccine expert at Baylor College of Medicine, previously told me that America should aim for at least 2 million shots a day — and preferably 3 million. That’s what would get some of the most important parts of vaccination efforts done this summer or earlier.

There are genuine questions about whether the higher goal is feasible, since vaccinators may face more vaccine hesitancy, as well as logistical difficulties, as they expand to more and more of the country.

But the extra months of a slow rollout really matter. In the US, more than 3,000 people are dying of Covid-19 in the US each day, adding up to tens of thousands a deaths each month the pandemic continues unabated. A mass vaccination campaign will likely bring that death toll down, but even a rate of hundreds of deaths a day will result in tens of thousands more deaths over months.

A slower rollout also means more time before life and the economy go back to normal. And it increases the risk that a potentially more contagious or deadlier variant of the coronavirus rises, as the virus continues to replicate and mutate, with some seemingly more dangerous variants already coming out of the UK, South Africa, and Brazil.

Biden’s efforts to stop Covid-19 — and fast — are likely how his presidency will be judged, following a campaign in which he repeatedly promised to take the coronavirus much more seriously than Trump did. Knowing this, Biden’s team is working to balance expectation-setting with finding an ambitious goal for the vaccine campaign.

With this week’s change, Biden’s team leaned a bit more on ambition than on setting lower expectations. But it’s a goal for his first 100 days, and it could increase in the future.

Still, his updated goal would still likely leave the country vying for herd immunity until late into 2021 — posing, at worst, a warning for how long the Covid-19 crisis may ultimately last.

Live results for the March 10 primaries
Trump quietly cut legal immigration by up to 65%
There’s a lot riding on this week’s SpaceX launch
Jeopardy host Alex Trebek has died after 36 years of hosting the show
What the US can learn from other countries using phones to track Covid-19
CDC issues travel advisory to residents of New York, New Jersey, and Connecticut