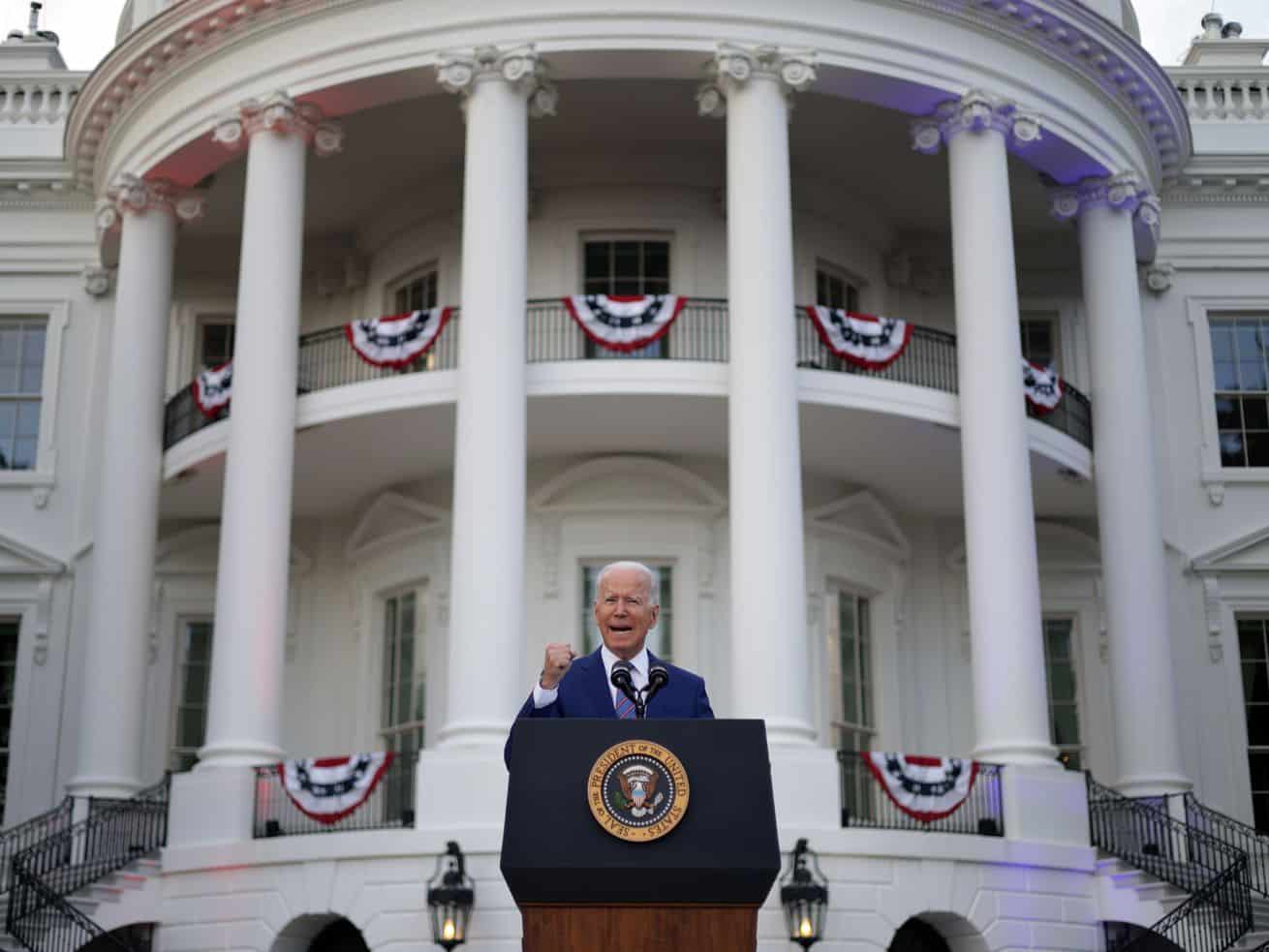 The president’s big antitrust push could impact how much you pay for plane tickets and prescription drugs.

President Biden will issue a sweeping executive order on Friday, making the case to Americans that companies from multiple industries have become too big and too powerful, and federal intervention is needed to bring competition back to the marketplace in order to drive prices down.

This represents a slight shift for the Biden administration, which has lately focused its antitrust attention on Big Tech. Last month, Biden appointed tech antitrust expert Lina Khan to be the chair of the Federal Trade Commission (FTC), which, along with the Department of Justice, is responsible for enforcing antitrust laws. The order addresses several issues with major tech companies and alleged anti-competitive behavior, calling for more scrutiny of mergers and acquisitions that certain tech companies might pursue in order to remove competitors from the marketplace. The new executive order also asks the FTC to establish rules over the collection of user data, which many Big Tech companies rely on for revenue and which Congress has consistently failed to pass laws to regulate.

But it can be hard to make the case that antitrust enforcement for Facebook and Google will do anything for consumers’ wallets because those services are largely free — you essentially pay for them with your data, which the companies use to do things like sell ads. And Amazon’s dominance over just about everything has come, partially, through its ability to make its prices lower than smaller businesses. People like to pay less for things, and lower prices have historically been interpreted as beneficial to the consumer. That’s basically what antitrust laws are for: to protect consumers.

So now Biden is rolling out a comprehensive executive order that, among other things, makes the case for how antitrust measures will save Americans money by promoting competition and driving down prices for everything from airline fees to hearing aids.

Here’s how the order, if fully implemented, can make things cheaper for you.

Biden’s executive order directs the Department of Transportation (DOT) to issue rules requiring airlines to refund fees, when services aren’t provided or aren’t provided adequately. For example, if you pay a baggage fee and your bags are delayed, that fee would be refunded. Or if a plane’s wifi or in-flight entertainment system doesn’t work, the airline would issue some sort of refund on the ticket price.

The order also directs the DOT to issue rules that airlines must clearly disclose all baggage, change, and cancellation fees to their customers.

Americans have long been forced to pay whatever the few internet service providers charge for those services, typically because they don’t have much of a choice: Most people have one or two high-speed internet options available to them, which gives their carriers little motivation to charge them less. And the prices those providers charge can vary and are often padded with hidden fees.

The order will ask the Federal Communications Commission (FCC) to stop internet service providers from making deals with landlords that restrict tenants to only one option for an internet carrier. This will, in theory, promote competition and lower prices.

The Biden administration will also push the FCC to revive its “Broadband Nutrition Label” plan. This would compel providers to explain all the different plans available to customers, all the fees associated with them, all the services customers are getting, and all the details of their final bill. These Broadband Nutrition Labels were proposed back in 2016, only to be dropped by the Trump administration’s FCC.

Finally, Biden is imploring the FCC to restore net neutrality. Net neutrality, which was established by the Obama-era FCC and repealed by the Trump FCC, would prohibit carriers from charging more to access certain sites or services. It does this by classifying internet service as a “Title II” common carrier, which would subject it to regulations along the lines of a public utility.

The order is ultimately trying to promote competition and transparency, and end fees designed to lock customers in.

Biden’s new order directs the Food and Drug Administration (FDA) to work with states and tribal authorities to import drugs from Canada, where the same drugs are typically much cheaper than in the United States. This would, ideally, force drug manufacturers to bring down the prices they charge in the US, or at least give Americans the option to pay less for imported drugs.

The order also directs the Department of Health and Human Services (HHS) to support generic drugs that will give Americans cheaper options to brand-name equivalents, and come up with a plan to combat price gouging within 45 days.

Finally, it asks the FTC to ban “pay for delay,” which is when drug companies pay off competitors to delay offering cheaper generic versions of their drugs once their exclusive patent ends.

Biden is ordering HHS to issue rules that allow hearing aids to be sold over the counter, rather than forcing consumers to have an expensive (and probably unnecessary) consultation with a medical professional first — one that few health insurers will even cover.

Repairs, from tractors to mobile phones

The order asks the FTC to expand “right to repair” rules. Farmers and iPhone owners alike have complained that their device and equipment manufacturers have made it impossible or excessively difficult for anyone but those manufacturers to do repairs — which allows the manufacturers to set their own repair prices with no competition to drive those prices down.

Products from basically any store that isn’t Amazon

In what could be one of the more sweeping parts of the order, the Biden administration asks the FTC to make rules that prevent “internet marketplaces” from using their dominant position to gain an advantage over the small businesses that have to sell their wares through them. For example, Amazon can see which of another company’s products are selling well, make its own versions of those products, and then display them more prominently. This could apply to Apple as well, as its many developers have complained that its App Store is a monopoly and that Apple will see what its users want (music streaming services, for example), make its own version, and push it onto Apple device owners.

I’m a bartender. I depend on tips. It’s a terrible way to make a living.
Trump adviser Roger Stone reveals new meeting with Russian
These cities are vying to host the 2020 Democratic National Convention
The new Space Jam is apocalyptic horror
Texas Air Force veteran's campaign ad goes viral
One way the US could have prevented the fight over the eviction moratorium